“Silence is a source of great strength.” – Lao Tzu

I think we all agree that this is a great life quote, but is it really true when it comes to romantic relationships? Can silence really strengthen a relationship, or does it actually weakens the bond between partners?

To be honest, my opinion is divided because it really depends on so many things. Sometimes it can be beneficial, but other times, it can be completely destructive to a relationship.

To help you understand when silence is good and beneficial for a relationship and when it can have bad consequences, I’ve compiled this collection of deep relationship silence quotes.

So, pay close attention to these quotes below because they can actually help you improve or save your relationship.

1. “Better to remain silent and be thought a fool than to speak out and remove all doubt.” – Abraham Lincoln

2. “Silence is only frightening to people who are compulsively verbalizing.” – William S. Burroughs

4. “We’re fascinated by the words – but where we meet is in the silence behind them.” – Ram Dass

7. “It’s only in silence that you can judge of your relationship to a person.” – Dorothy Richardson

9. “I promise to dream with you both great dreams and small dreams. To ask your counsel in times of uncertainty. To honor your silence when you seek to be alone. To be ever wondrous at your curiosities and revelations. And to be ever rejuvenated by your passions…” – Carew Papritz

10. “Under all speech that is good for anything, there lies a silence that is better. Silence is deep as Eternity; speech is shallow as Time.” – Thomas Carlyle 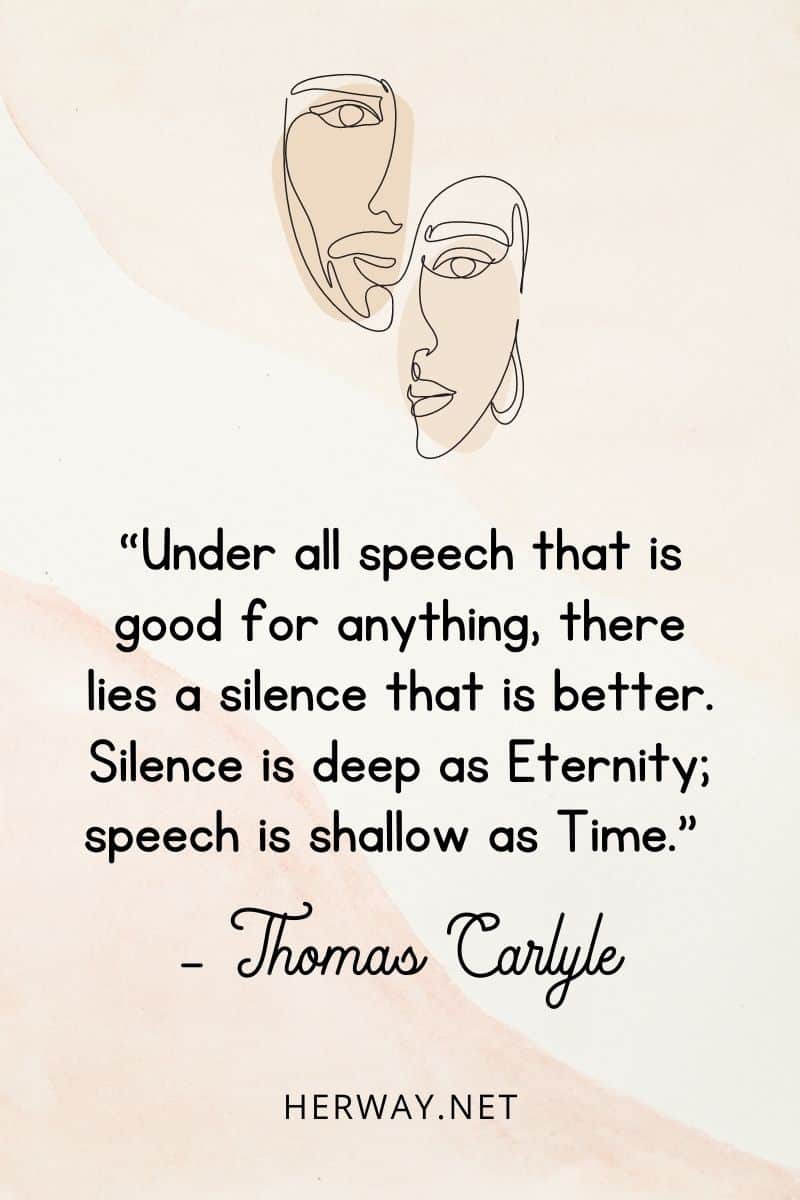 12. “Nothing at times is more expressive than silence.” – George Eliot

13. “In silence, there is eloquence. Stop weaving and see how the pattern improves.” – Rumi

14. “A meaningful silence is always better than meaningless words…” – Unknown

16. “Silence is one of the great arts of conversation.” – Marcus Tullius Cicero

18. “It is always assumed by the empty-headed, who chatter about themselves for want of something better, that people who do not discuss their affairs openly must have something to hide.” – Honoré de Balzac

19. “Silence is golden when you can’t think of a good answer.” – Muhammad Ali

20. “There can be nothing more baffling in a human relationship than silence, the dark loom of doubts and questions unexpressed.” – Wallis Simpson 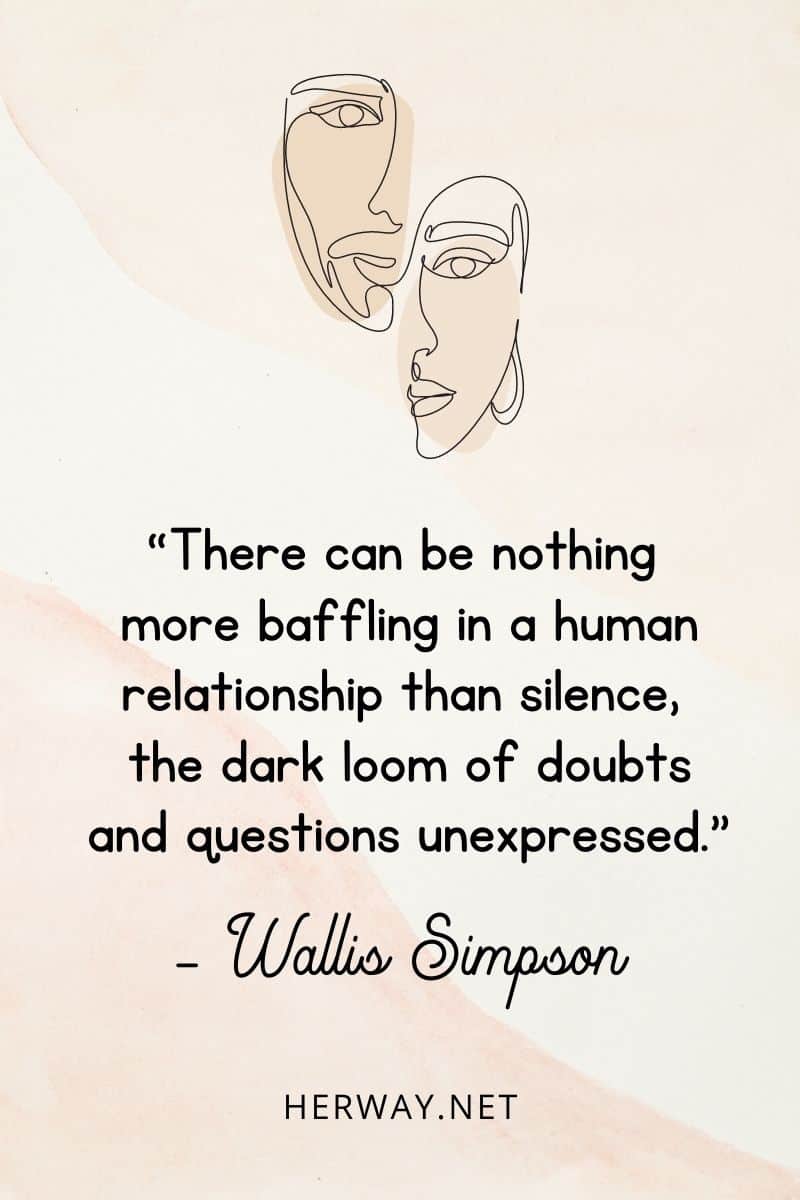 21. “Silence is the great teacher, and to learn its lessons, you must pay attention to it. There is no substitute for the creative inspiration, knowledge, and stability that come from knowing how to contact your core of inner silence.” – Deepak Chopra

22. “I prefer not to elaborate on the various stages of our dealings over the next few days – disbelief, anger, recrimination, the raking up of old sores, bitter silence, and so on – but I can say that they gave lasting strength to our relationship like a thick scar is stronger than the skin around it.” – John Mole

23. “You hesitate to stab me with a word, and know not – silence is the sharper sword.” – Samuel Johnson

24. “There is no real aloneness. There is solitude and the nurturing silence that is the relationship with ourselves, but even then, we are part of something larger.” – Linda Hogan

25. “My love for you is infinitely greater than mere words can describe, which is why I have fallen silent.” – Wald Wassermann

26. “Your silence will not protect you.” – Audre Lorde

27. “To communicate through silence is a link between the thoughts of man.” – Marcel Marceau

28. “Laying with someone in silence, no words at all, just breathing and feeling like you’re having the best conversation of your life. That is true love.” – Unknown (a perfect love quote about silence)

29. “In the end, we will remember not the words of our enemies, but the silence of our friends.” – Martin Luther King Jr.

30. “Silence is pure and holy. It draws people together because only those who are comfortable with each other can sit without speaking.” – Nicholas Sparks 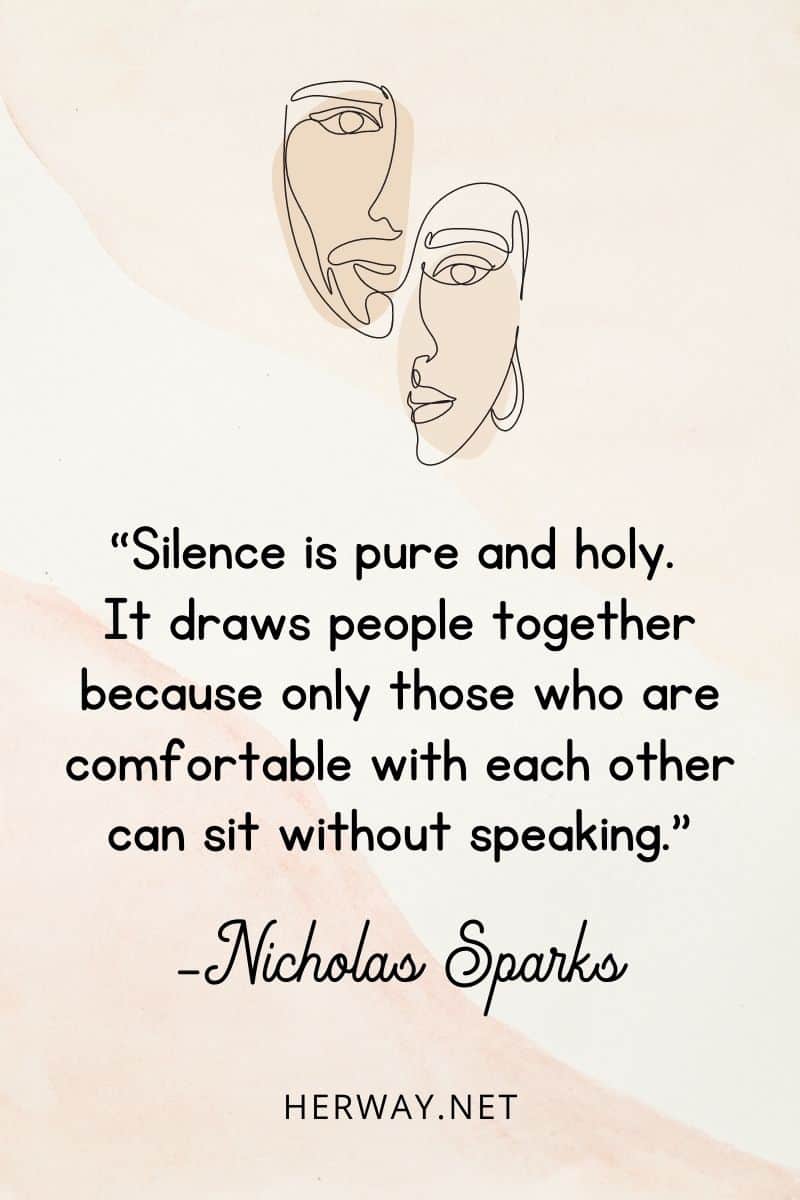 31. “Silence is argument carried out by other means.” – Che Guevara

32. “We need silence to be able to touch souls.” – Mother Teresa

33. “Sometimes during a moment of silence… you get to hear everything.” – Unknown

34. “The right word may be effective, but no word was ever as effective as a rightly timed pause.” – Mark Twain

35. “Saying nothing… sometimes says the most.” – Emily Dickenson

37. “Be silent in two situations. 1) When you feel one can’t understand your feelings from words. 2) When one can understand without any words.” – Unknown

39. “Silence is a true friend who never betrays.” – Confucius

40. “There are some people who could hear you speak a thousand words and still not understand you. And there are others who will understand you without you even speaking a word.” – Unknown 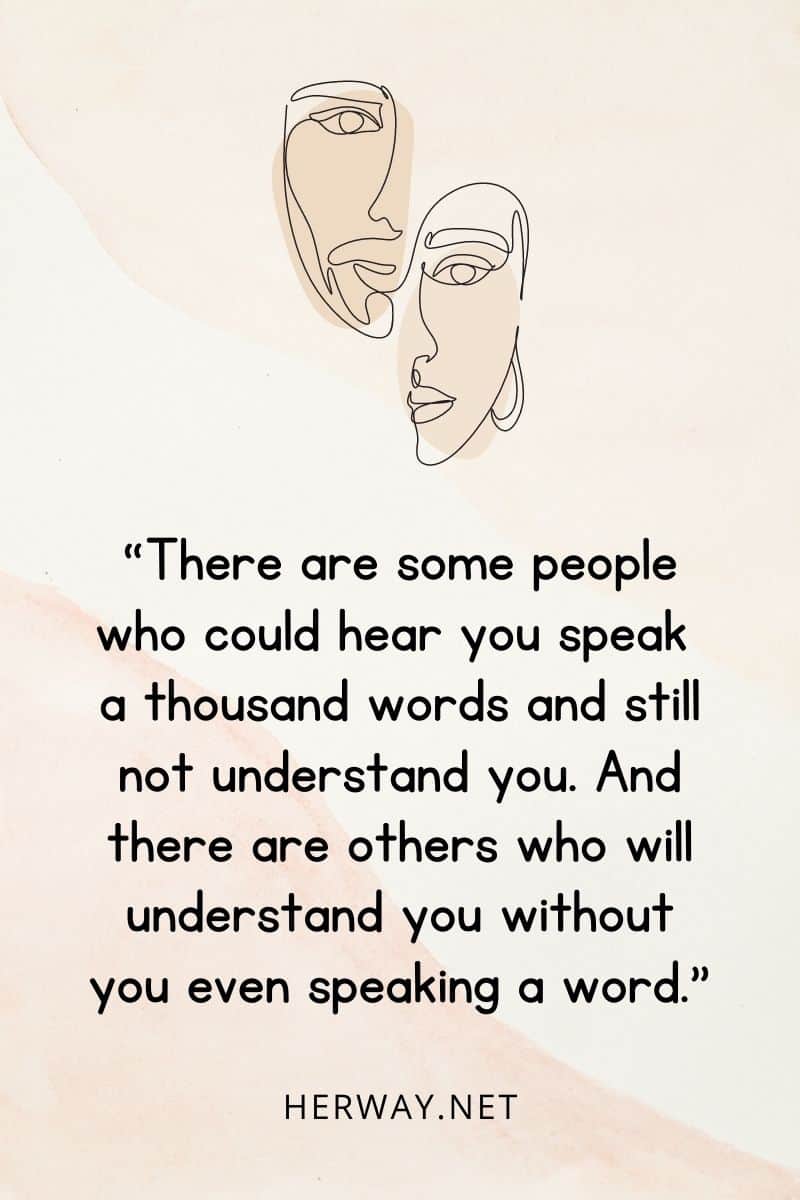 Inspirational Quotes About Silence In A Relationship

1. “Don’t waste words with people who deserve your silence. Sometimes the most powerful thing you can say is nothing at all.” – Mandy Hale

2. “No sound in this world can be louder than silence. If someone understands your silence, that person will never misunderstand your words…” – Unknown

4. “Remember not only to say the right thing in the right place but far more difficult still, to leave unsaid the wrong thing at the tempting moment.” – Benjamin Franklin

5. “Silence is so important when you’re working. You must have periods where you don’t hear anything, just to reflect on what you’ve already done. Otherwise, you traumatize your relationship with the piece that you’re working on.” – Lisa Gerrard

6. “The monotony and solitude of a quiet life stimulates the creative mind.” – Albert Einstein

7. “Sometimes silence can be beautiful. But you should try to communicate openly with your loved ones and pour your heart into the ears of understanding.” – Mwanandeke Kindembo

8. “Life’s most deep feelings are often expressed in silence, and the one who can read volumes from your silence is your true companion.” – Ritu Ghatorey

10. “Sometimes a fight saves a relationship, where silence breaks it. Speak up for your heart so that you won’t have regrets.” – Unknown 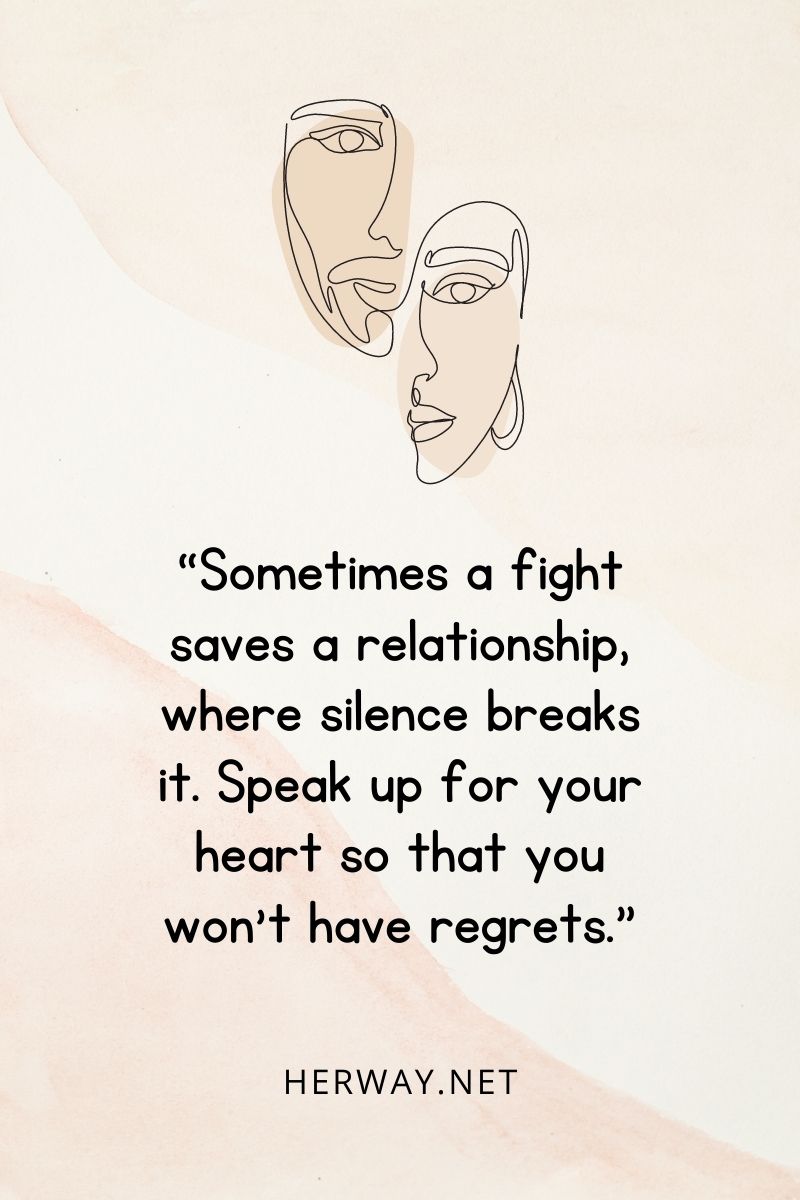 11. “Silence falls, pulsing with the truth of what I’ve learned and what Dean has yet to acknowledge. Our relationship, our love, cannot and will never be perfect. It will, however, always belong only to us in all its flawed, intense beauty. Perfect in its very imperfection.” – Nina Lane

12. “Never be bullied into silence. Never allow yourself to be made a victim. Accept no one’s definition of your life; define yourself.” – Harvey Fierstein

13. “To become an effective listener, you need to learn the power of silence. Silence gives you the opportunity to think about what is being said before you respond.” – Unknown

14. “Have the maturity to know that sometimes silence is more powerful than having the last word.” – Orebela Gbenga

15. “Silence (in a relationship) is never your friend. Communication is the pathway to healing and growth.” – Ilya Atani

1. “Silence can be a person’s loudest cry. You know you have really hurt someone when they start ignoring you!” – Unknown

2. “The silence stretched out between us as I stared at him, the tears blurring my vision as I waited for him to save me from this torment. Surely he could find a way.” – Kathryn Michaels

4. “At least if I keep my love a secret, he and I can still have this wonderful, odd, exciting relationship where I love him in silence and pretend he’s loving me in silence too.” – Katy Evans

5. “Seeing her sitting there unresponsive makes me realize that silence has a sound.” – Jodi Picoult 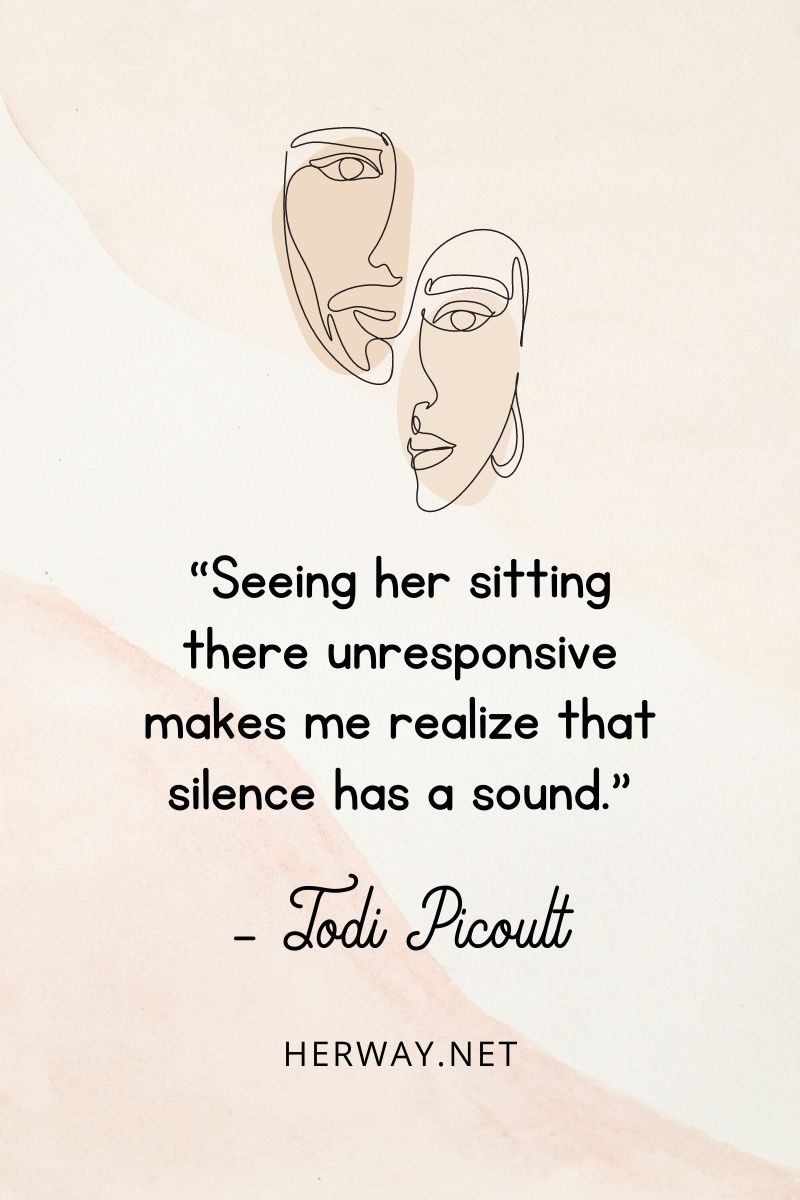 7. “Words can hurt one’s feelings. But silence can damage a person. Silence speaks louder than you’ll ever know.” – Unknown

8. “Spiteful words can hurt your feelings… But silence can break your heart…” – Unknown

9. “We fell into silence, both of us keeping our own secrets of what we’d suffered in the other’s absence. I wondered if we were trying to protect each other or simply didn’t want to admit to our own fears and weaknesses.” – Richelle Mead

10. “Silence is an ultimate weapon that can kill your loved one internally.” – Unknown

And, of course, a list of the best quotes about women’s silence that all women will relate to and men, on the other hand, may find helpful.

1. “Silence is a woman’s greatest pain in them. When a woman ignores you, she has been hurt deeply.” – Ai Ling

2. “My fear of being real, of being seen, paralyzes me into silence. I crave the touch and the connection, but I’m not always brave enough to open my hand and reach out. This is the great challenge: to be seen, accepted, and loved, I must first reveal, offer, and surrender.” – Anna White

4. “When a woman no longer gets frustrated and upset with you, you can almost guarantee that she doesn’t care anymore. Silence is deadly.” – Unknown 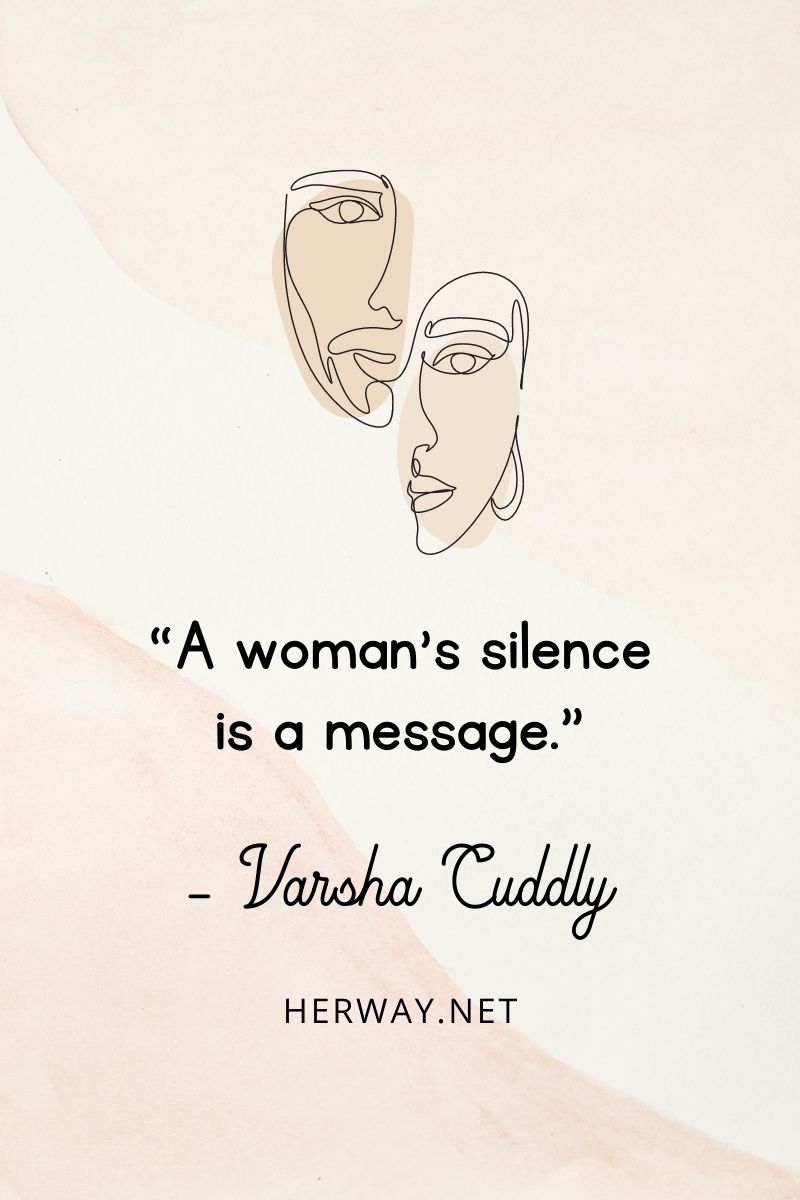 6. “A woman’s silence says it all. Her silence and lack of expression mean that she’s reached her breaking point.” – Unknown

7. “A quiet woman is at peace and about to change everything.” – Unknown

10. “Don’t treat a woman’s silence as her weakness. Treat it like the calm before the storm.” – Sulagna

11. “The most dangerous animal in the world is a silent, smiling woman.” – Unknown

12. “Just because a woman is silent does not mean she agrees.” – Clarissa Pinkola Estes

14. “It simply isn’t a woman’s nature to be silent for prolonged periods of time.” – Maya Banks 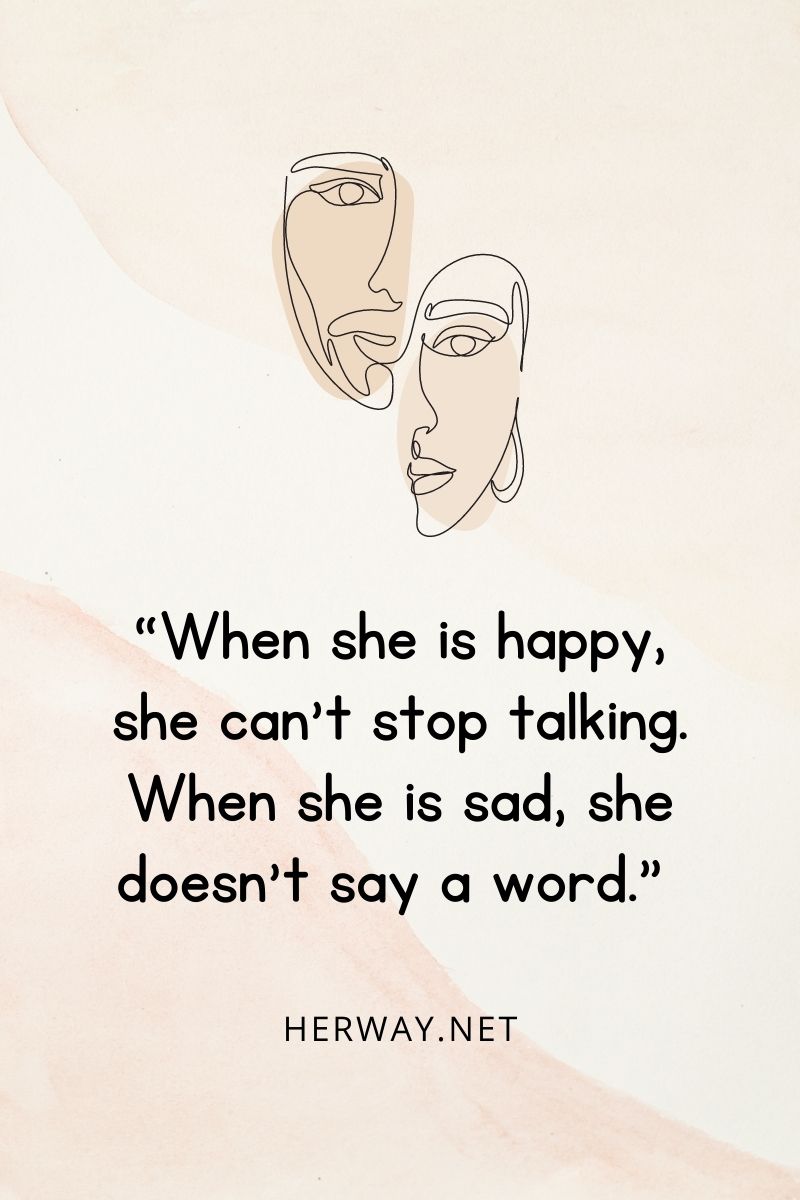 16. “A man sometimes wins an argument, but a woman always wins a silence.” – Robert Breault

17. “What manly eloquence could produce such an effect as a woman’s silence?” – Jules Michelet

18. “Silence is a girl’s loudest cry. If she is speechless, her heart is too tired for words.” – Unknown

19. “When a woman who has much to say says nothing, her silence can be deafening.” – Margaret Landon

Is Silence Good In A Relationship?

It really depends on the type of silence. For example, it’s good to respect each other’s personal space and wish for some alone time. It is also okay to share some quiet time and enjoy the silence together.

On the other hand, if we speak about silence as giving one another the silent treatment, that is very bad and deeply unhealthy for a relationship. It’s one of those things that make partners grow apart.

All couples should understand that giving each other the silent treatment is never a good way to solve their issues. The fact is, it can only poison their relationship to the point it can no longer be fixed.

How Do You Stop Silence In A Relationship?

The first step to putting an end to this awful relationship killer is acknowledging the issues. Both partners should be aware they have a problem, and then, together, they should work on finding the solution.

Of course, that solution is establishing healthy communication.

Partners need to feel free to share everything with one another, from small things like what happened at work that day to important things like, for example, sharing their feelings and emotional needs.

Another great idea is to find a common hobby or activity that will allow them to reconnect. Silence happens when a relationship hits the boredom rut, but it’s our job to find a way to rekindle the spark.

The truth is, nothing can harm the bond between partners as much as a lack of communication, and giving each other the silent treatment will lead to communication problems sooner or later.

If your relationship is currently under the attack of silence, sharing these motivational quotes with your loved one via WhatsApp or social media is the best way to fight back.

Let go of resentment and fight for your relationship. Don’t allow the silence to be stronger than your love.