Whenever you see your girl lately, all you see is doubt in her eyes. So you think she is obviously exaggerating and overreacting.

You don’t know what has gotten into her and why she doesn’t trust a word you say. She obviously has strong trust issues and this has been impacting on your relationship in horrible ways.

You wonder where the happy and cheerful girl you met disappeared to. Now, you can only hear her nagging and questioning your every move.

There is nothing you could do to prove your love for her. You think you really are trying your best to be a good guy, to be a loving and supportive boyfriend, but nothing seems to work.

Even if you moved the world for her, she would still have doubts about your love.

And naturally, this is slowly starting to annoy you. You didn’t picture your life like this.

You don’t need someone whose overthinking ruins your relationship and someone who is constantly checking on every little thing you do. You don’t want to feel like you are constantly being monitored and controlled.

According to you, all of this got a little out of hand. She is too jealous and you are starting to think she is going crazy.

You feel like you just can’t deal with her constant mood swings and with her behavior toward you in general.

But what you don’t know is that every relationship is a two-way street. Her behavior is just a reaction to your actions and that is the only truth.

Instead of accusing her of being crazy, jealous and too controlling, have you ever thought about all the things you did which brought your girlfriend to be like this?

Yes, she is very well aware that she has trust issues. She doesn’t believe a word you say and there is nothing that can convince her of your honesty.

Yes, she sometimes acts like she is paranoid and there are times when she’ll accuse you of things you didn’t do.

But have you ever thought about what you did that caused her to be like this? Have you ever questioned yourself and everything you did to her which made her behave in this manner?

You know very well this girl wasn’t like this when you met her. You know she was an innocent and caring girl who believed in love and who believed that there was something good in everything.

But most of all, she believed that there was something good in you. Although people kept telling her that you were trouble and that you weren’t the right man for her, she had faith in you.

She had faith in her love for you and she believed the enormous love she felt for you would change you.

But she never changed you. Instead, you changed her. You showed her that she never should’ve trusted you.

You showed her that everyone was right about you and that she was foolish to believe you. You disappointed her more and more every time she caught you lying.

And then, she caught you cheating on her. You may think she forgave you. And maybe she did. But she didn’t do it because she wanted to.

And she did it because she kept hoping that you’d eventually become a better man.

But although she forgave you, she never forgot what you did to her. She tried really hard to put all of that behind her and she tried to turn over a new leaf. But she just couldn’t.

The feelings of betrayal and humiliation you put her through were even stronger than the love she felt for you.

And above all, she still can’t forgive herself for staying by your side. She can’t stand living in this torture anymore.

And there is nothing she can do about it.

Remember that all of this is your fault. And remember that she wouldn’t have trust issues if you hadn’t had lying issues. 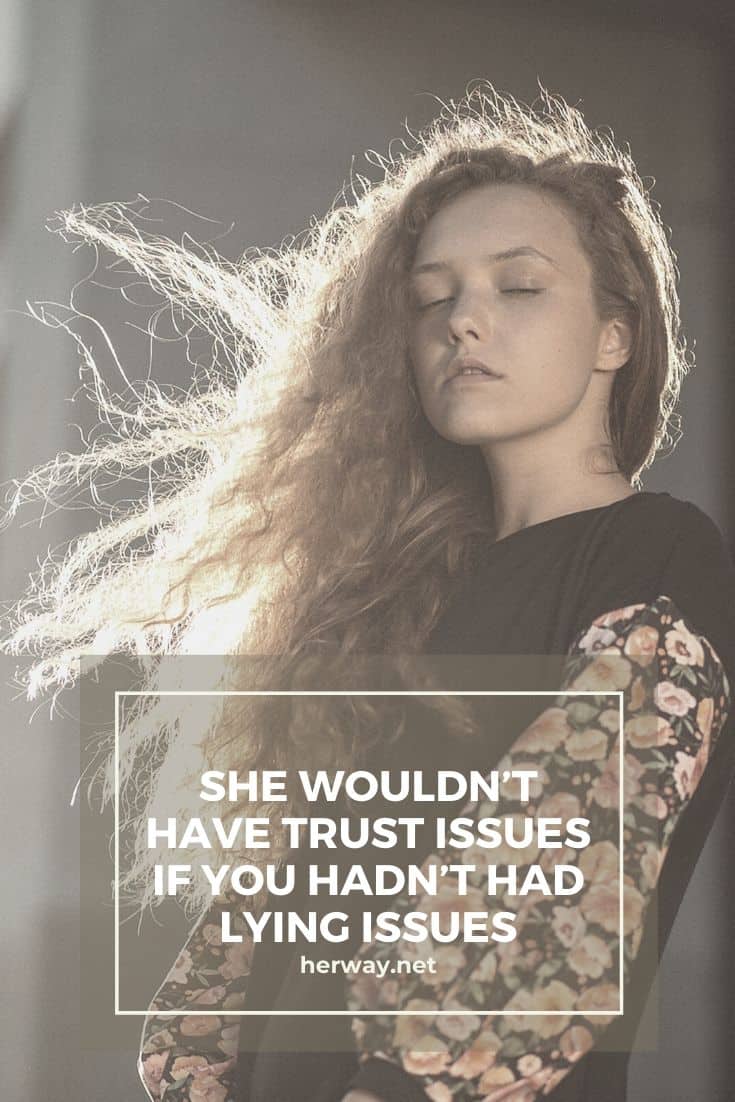