I know it’s the call that is the most difficult not to pick up the phone on, but his late-night drunk call is probably the only one that you shouldn’t answer. Not at any price!

You know how Dua Lipa says “Don’t pick up the phone, you know he’s only callin’ ’cause he’s drunk and alone…”

Unfortunately, that’s the truth. The ONE AND ONLY TRUTH.

I know, he might be calling to say that he loves you and that he never stopped thinking about you. And all of it may be the truth but it could also be just the alcohol talking… That means another heartbreak for you once he sobers up and realizes what he has done.

If you want to find out why your ex keeps drunk texting or calling you, keep reading below. Also, I know that is preventing you from moving on and I’ll help you to navigate those drunk calls properly and leave them in your past, together with your ex.

Contents show
1 What Does It Mean When He Drunk Calls?
1.1 Drunk calls = Booty call
1.2 You’re his ego booster
1.3 You’re only his option, his plan B
1.4 Despite it all, sometimes a drunk mind truly speaks a sober heart…
1.5 Be honest with yourself…
2 Should You Apologize For Drunk Dialing?
3 Final Words

What Does It Mean When He Drunk Calls? 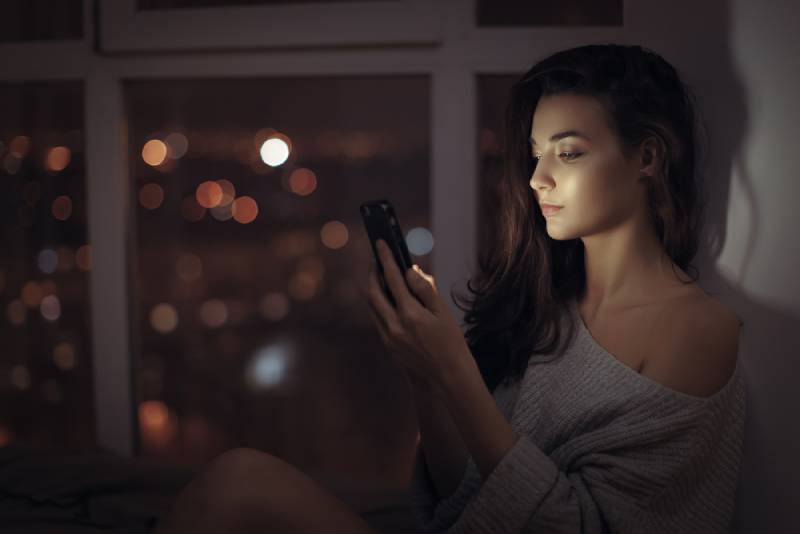 Drunk dialing is really trending these days, especially among guys, right? Yeah, I know. It just seems that whenever your ex gets drunk, you’re the only person whose phone number he has in his phone and he just has to call you.

Do drunk calls mean anything? Why does he keep calling me only when he’s drunk? I know that you’re currently busting your head with these kinds of questions.

On the one hand, you know it’s not because he loves you. But, on the other hand, it also gives you a trace of hope that he isn’t totally indifferent to you.

I’m so sorry that I have to be the one to break it to you, but the most common reason for a guy’s drunk dialing is just to get into your pants.

Of course, it can also mean that he’s calling you because he is in love with you but doesn’t have the guts to admit it to you when he’s sober. Guys feel more relaxed and a lot more confident when they’re intoxicated. Well, to be honest, we all do.

If this is happening to you for the first time and you’re trying to make sense out of his drunk calls, scroll down for more possible reasons and explanations. 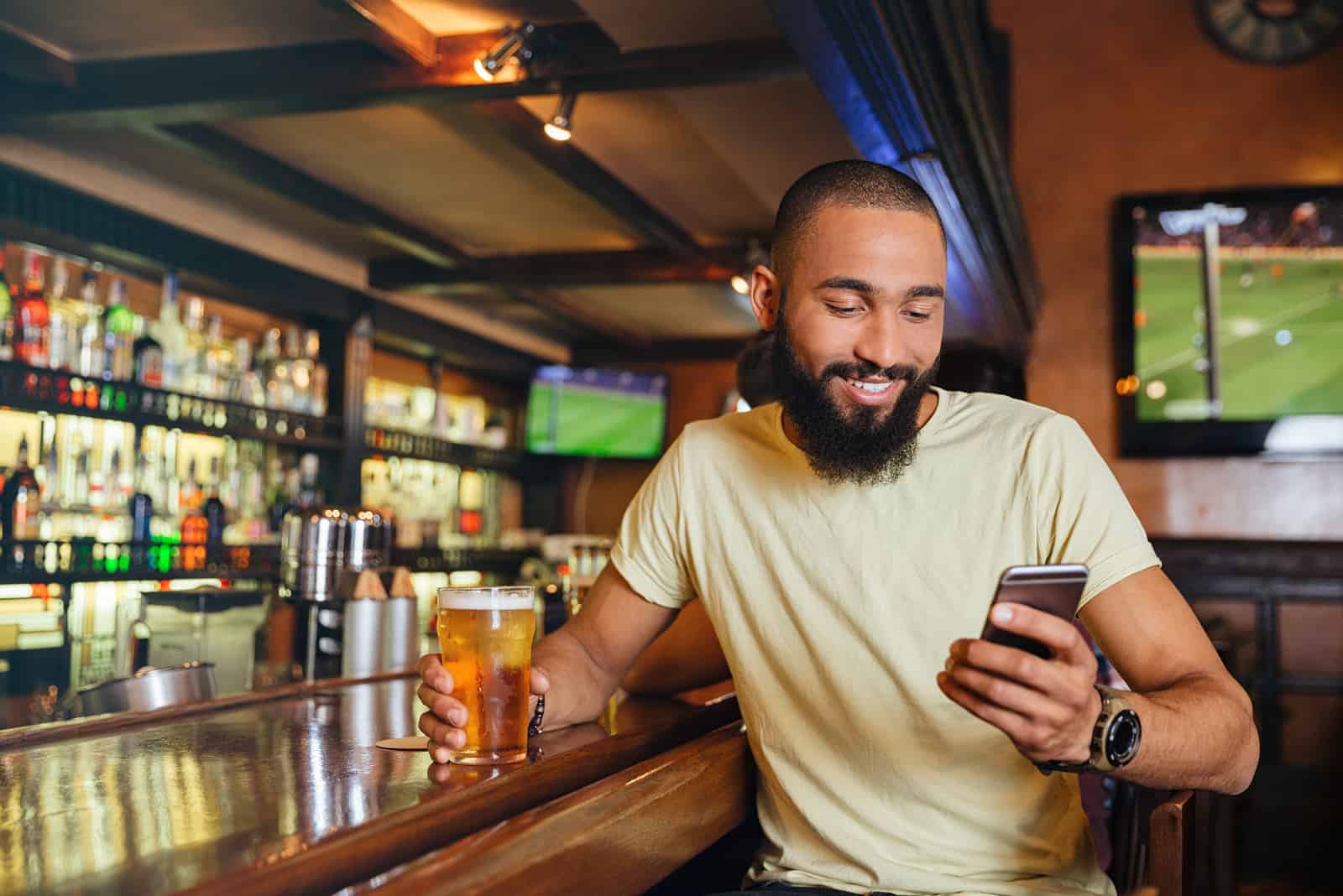 The most probable thing is that this guy doesn’t love you the way you think. I hate to be the one to break it to you again, but it is likely that you are just convenient for him whenever he drinks.

It is possible that he knows that you are the only one who will pick up the phone, no matter when he calls you.

You know you are the girl who won’t have any issue leaving everyone and everything behind just so you can run to see him or pick him up.

I know hearing this is painful but it is also possible that he thinks of you as his last resort.

He probably isn’t drunk calling you to say “I love you“. As painful as it sounds, the most common case scenario is that he only wants to hook up with you in a random parking lot, have some one-night stand fun and he’ll forget about you till the next time he gets drunk.

He thinks of you as his safe booty call and nothing else. And while you keep answering his calls, you’ll keep giving him the right to think so.

That’s why you always have to be aware of your own worth. No matter how much you love someone, you should never ever let them treat you any worse than you deserve to be treated.

See also: If A Guy Does These 10 Things, You’re Nothing More Than His Booty Call

Whenever he goes out with his best friends, he probably tries to get into some girl’s pants and when he doesn’t succeed in doing so, his self-esteem lowers. Especially if his pals start teasing him about it.

So, he takes his cell phone and calls you because he thinks that you’ll never turn him down. He is just using you as an ego boost.

He’s aware of your feelings and he’s just using them for his own benefit and, of course, to please his own needs and have some fun. And every time you answer that phone call, his ego gets boosted.

I know that you’re head over heels for this guy and a simple phone call with him is a dream come true for you, but think about it… Do you really want to be used like that?

If you’re looking for lasting love, not a casual flip, then this guy clearly isn’t the right one for you. If he truly likes you, he would text you every single day, not just when he gets drunk and expects to get lucky.

You’re only his option, his plan B 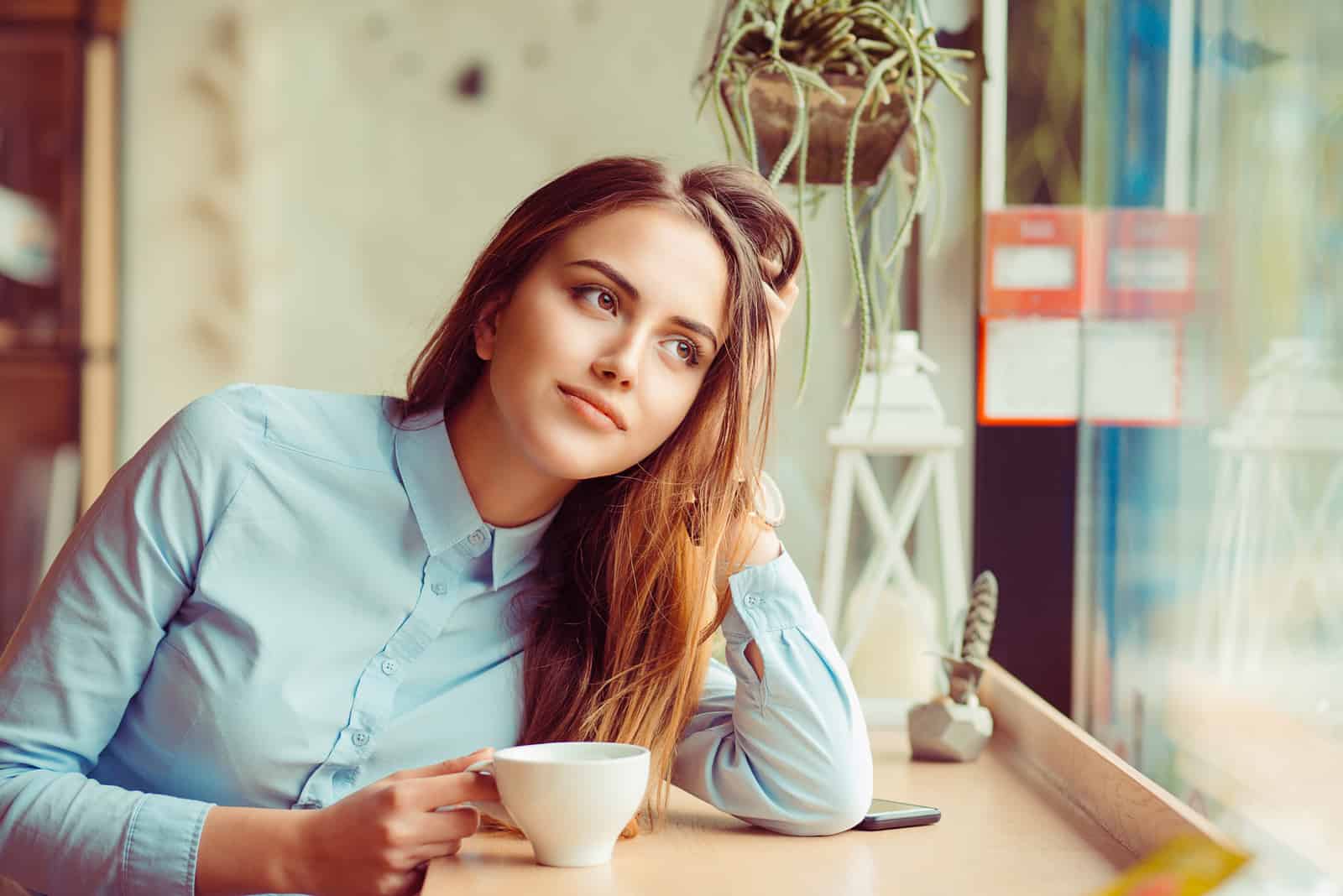 You two are in a kind of an almost relationship but it’s quite clear that you are the one who cares more.

He is the one who refuses to commit and who always puts you on hold while you’ve clearly grown to love him.

This man never puts you first and always treats you like just another one of his options.

He rarely shows any signs of affection or love for you and most of the time you have to beg for crumbs of his attention.

But all of this suddenly changes when he has a little more to drink. All of a sudden, he becomes the man of your dreams.

All of a sudden, he starts calling and texting you all the time. He becomes eager to see you and he tells you everything you’ve always wanted to hear.

And with time, his drunk episodes have become the highlights of your life.

You’ve started waiting for him to become like this because this is actually one of the rare times you get to enjoy this man’s love.

Just admit it, you were waiting for his phone call last night too, right? I know you did and you’ll wait for it the next day also and every other day, until one day it finally hits you and you realize that you’re so much better than that…

Despite it all, sometimes a drunk mind truly speaks a sober heart…

When you think about alcohol, one of the things you usually connect it with is honesty. You’ve always had the opinion that people are always the most honest when they are drunk.

After all, they don’t say ‘a drunk mind speaks a sober heart’ without any reason, right?

And it is simple—alcohol makes you become less inhibited and makes you lose a part of your self-control.

The fact is that people use alcohol as a social lubricant. This usually results in people telling more truth and saying things they usually wouldn’t when they are sober.

This is the theory you especially stick to when it comes to this person who comes and goes from your life.

The fact is that this man usually acts cold and uninterested during the day, when he is sober. But it really seems like he turns into a completely different man once he gathers enough of that liquid courage. The one who is suddenly able to confess all of his feelings.

Yes, you’ve heard me well. Even though it’s such a rarity, the drunk dial can really mean an honest confession of love. But, don’t pin your hopes on his drunk dials until you get the confirmation of his confession once he sobers up.

Be honest with yourself… 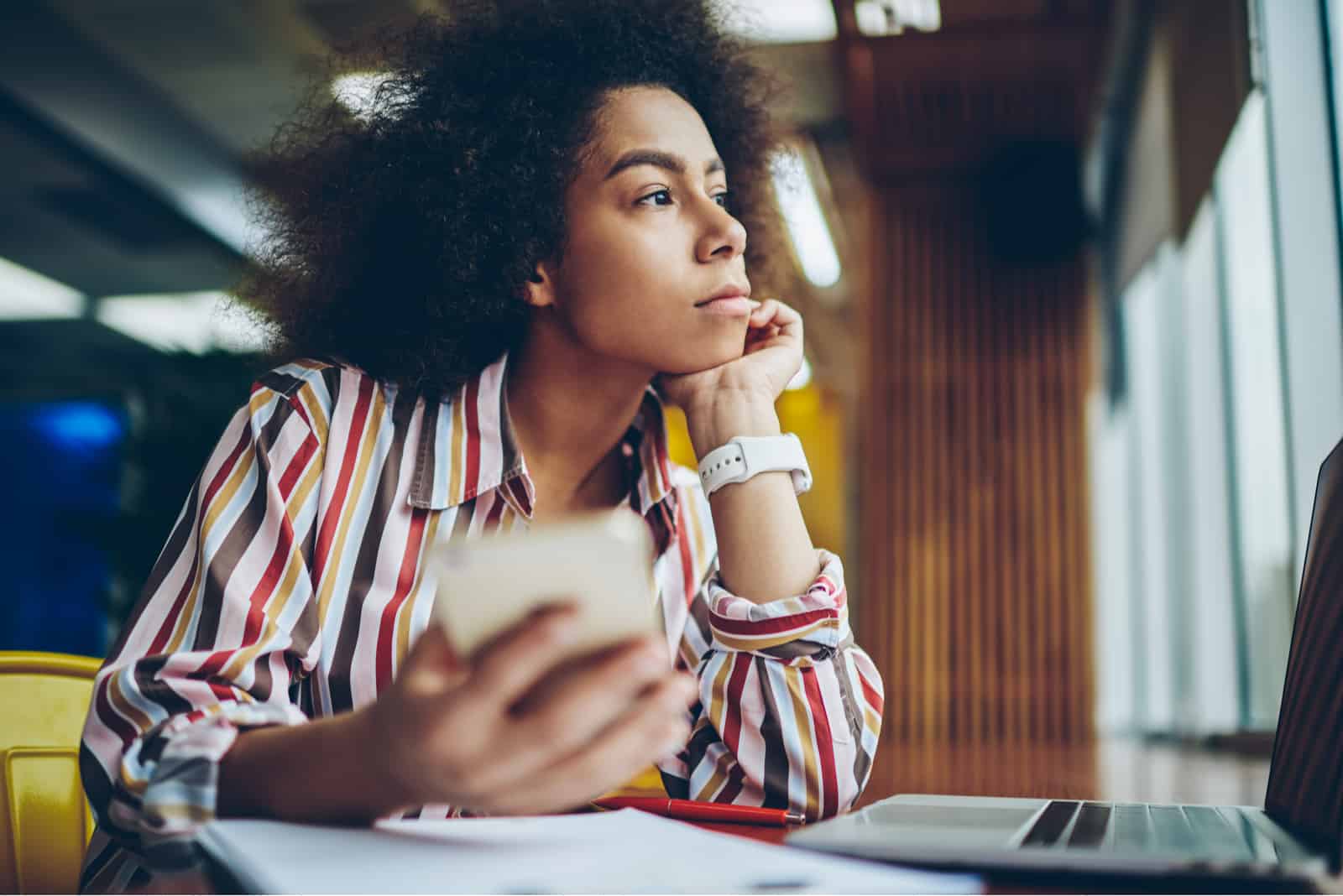 Is this really something you want for yourself? Is this type of relationship really making you happy?

I know you think he obviously has strong feelings for you and this is the time when he has no trouble expressing them.

You assume that his drunk personality is actually the real him and that he pretends not to love you whenever he is sober.

You keep justifying him and looking for excuses for his behavior. And his drunk texts and calls are actually holding you on to him.

They give you a trace of hope that this man has real feelings for you but that he is doing everything possible to hide them.

Well, even if this is true, it is obvious that he is a guy who isn’t capable of facing his own emotions because he needs some liquid courage to do so.

And he is obviously too much of a coward to tell you how he really feels when he is sober.

Should You Apologize For Drunk Dialing? 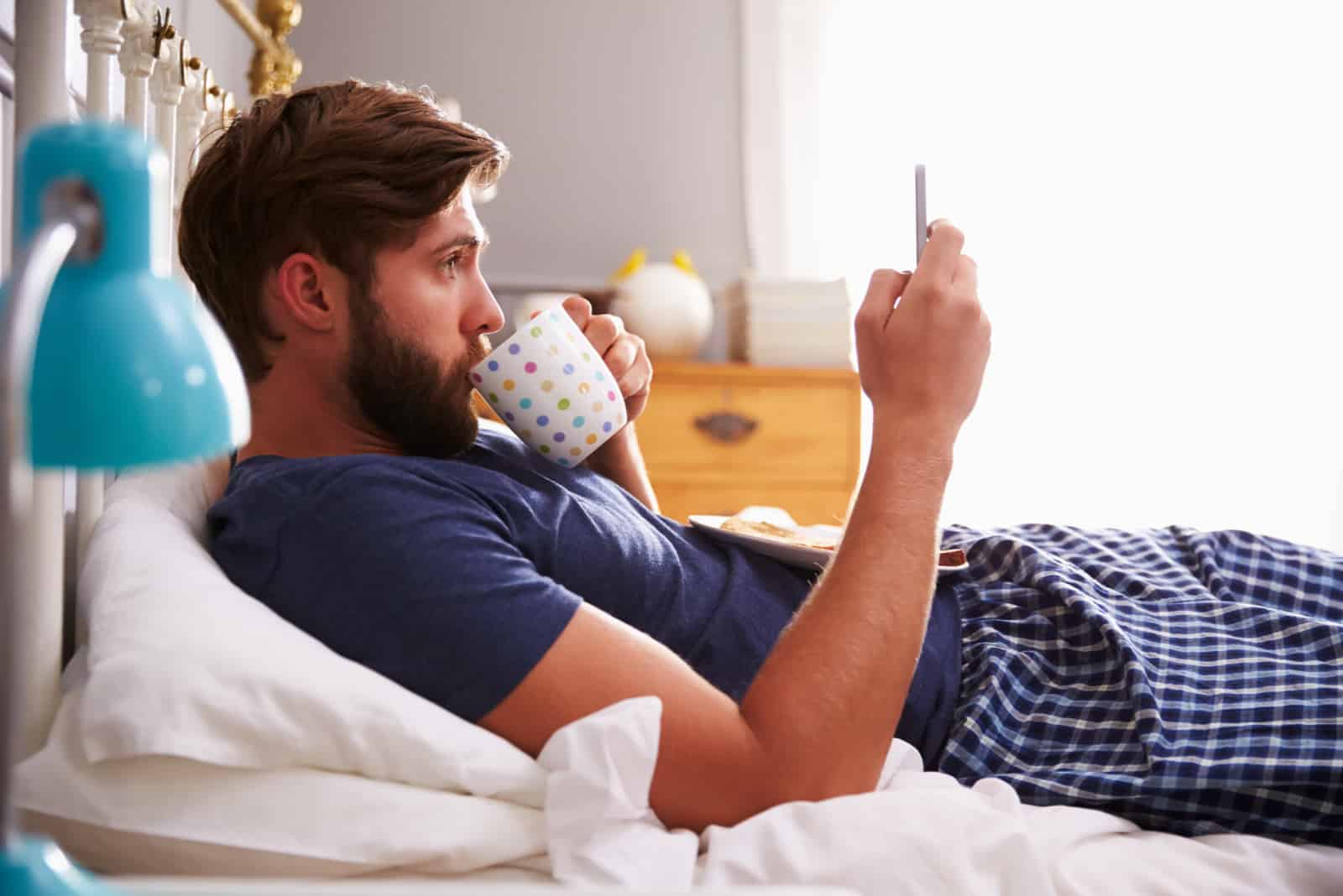 Uh, this is a tough one and to be honest, I feel a great deal of ambivalence about this issue.

If you called your ex-girlfriend or ex-boyfriend drunk just to give them a piece of your mind and said some ugly words that you regretted the next morning when you sobered up, you should call or send them a text message and apologize.

Just say that you know that alcohol isn’t an excuse for behaving that way, you were drunk and weren’t aware of your actions.

You shouldn’t literally beg them to forgive you, because it’ll only make you look lamer. You should only apologize for those nasty words that you would never say to them nor to anyone else when you’re sober.

On the flip side, if you feel good and happy about your drunk dial even after you sober up, if you feel relieved after you’ve let it all out, don’t apologize.

Actually, you should never apologize to anyone for anything that makes you feel happy and pleased.

You should only apologize to yourself for keeping all those feelings inside of you for too long and destroying your own emotional and mental health.

The bottom line is that your drunk dialer is not the kind of man who deserves a place in your life. You don’t need someone who will remember you only when he’s drunk.

Instead, you deserve a man who will proudly hold your hand in all circumstances and situations.

And you’ll never meet a man like this until you break things off with this guy.

His drunk calls and texts are holding you on to this guy. They give you a trace of hope that he really loves you and that alcohol just helps him get his emotions to the surface.

You’ll understand that he isn’t and never was the right guy for you. And you won’t pick up the phone, no matter how long it keeps ringing. 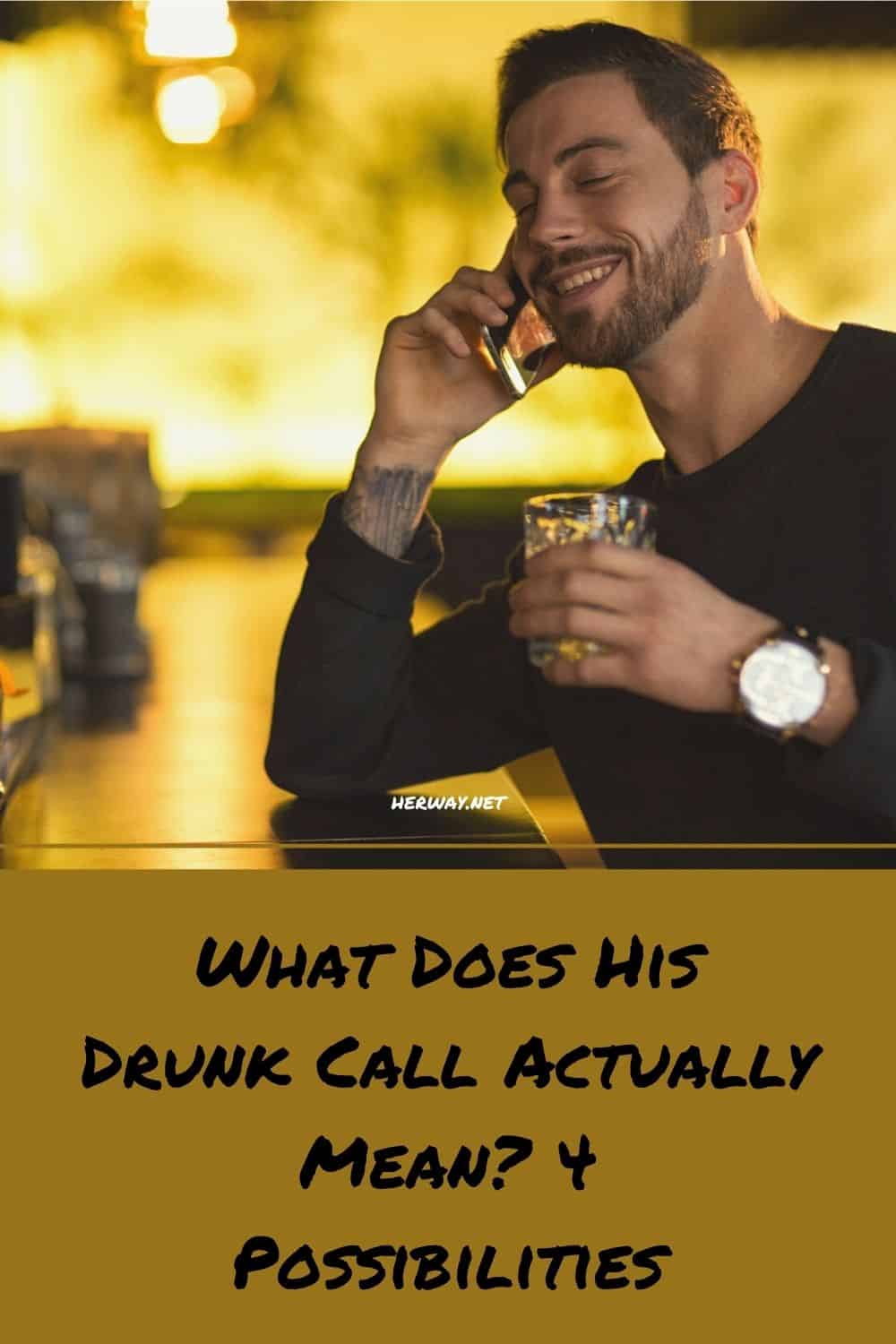