This letter is for all the kids who broke up with their toxic dads and found their happiness far away from them.

Every single word comes from the bottom of my heart and I mean all that I say.

I know that there are a lot of you who didn’t have a nice childhood. I know that you wanted so many things from your dad but you didn’t get them.

And I know it hurt you so badly.

I know that a father is supposed to be a person you love to the moon and back but the problem was that your father never showed you that love in the same way.

They were selfish enough to do other things when you needed them.

They weren’t there when you wanted to talk to them about the things that only fathers talk about with their kids.

And you know what the worst thing was? All the other kids around you had great fathers to be with them all the time, to give them the love and support they needed so much.

Just you didn’t get what you craved so much.

And the truth is that you didn’t ask for too much.

You just asked for your dad being at your football game or some competition you won first place in. You just wanted your father to be proud of you because of your accomplishments.

Because even if those were just little things, they meant so much to you.

You were just a child and you thought that a father should be someone who would protect you from all the bad things that could happen to you.

But your dad was never there because every time you wanted to take his hand while you were afraid of something, he let your hand go, telling you that you should confront your fears.

Every time you wanted a hug or kiss because you hadn’t seen him for some time, he just told you to get into the car and didn’t even ask anything about you.

He didn’t want to know about your emotions, about the things that you were going through and about your feelings toward him.

He was cold and distant.

And because of all of this, your heart got broken. Because of his cold attitude, you thought that you were not good enough.

You thought that the problem was in you even if it was in your father all the time.

You felt less worthy and you asked yourself if your father would be happier if he had someone else as his son or his daughter.

You asked yourself if you were doing something wrong all the time and why your dad didn’t give you the love you deserved.

And you spent so many sleepless nights crying yourself to sleep and suffering in silence.

But you know what?

Even if you thought that it was all your fault, just know that it wasn’t. You just had the bad luck to be the child of an emotionally unavailable man, someone who couldn’t even love himself properly, someone who gave up on life before his death.

You were just one more victim of a toxic dad who watched you suffering but he never offered his hand. So, be angry, smash things, cry, do anything you want.

Let all that toxicity and anger that is inside you leave. Because if it stays inside you, it could kill you.

The amount of frustration of not getting the love you craved is so huge that it could beat you to emotional death. But that is not what you want, right?

You don’t want your dad to see that he destroyed you, you don’t want him to see the fire in your eyes getting smaller and smaller.

You want him to see you standing on your own two feet after so many bad things that he did to you. You don’t want him to see that you were his victim and that you will have scars on your heart your whole life.

No, you don’t want that at all.

That’s why you need to be smart.

You need to think about how to overcome your problems. And whatever you do, don’t try to take revenge on him.

You know, karma is a bitch and it will make him pay for all that he did to you.

One day he will ask you to give him just a little bit of your love, to shake his hand firmly while he is saying his last words.

One day he will feel just like you, just like a small child hungry for love and forgiveness.

That memory will stab you in the heart with all its power but you will still give him your hand. You will forgive him for all that he did to you.

You will show him that you are a greater person than he was. But you will also let him go.

Because holding onto something that was never real doesn’t make any sense.

And if you ever remember your dad, if something reminds you of him and if you wish he was there with you, don’t pick up the phone to call him.

Yes, he is your dad, he is your creator but he is also the man who ruined you when you were hurting the most.

You are allowed to love him. But love him in the way he never finds out about.

Don’t give him the satisfaction of winning in the end. 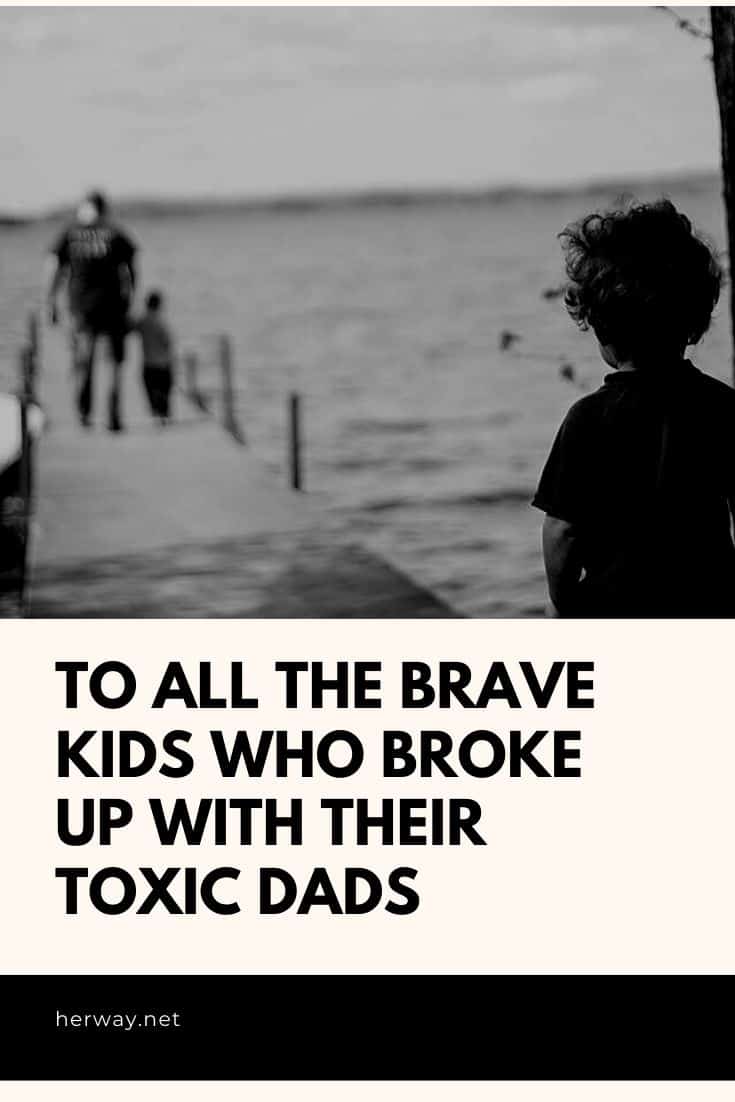 Absolutely terrible advice. Be sure you know exactly what the real circumstances where with your father. Was he sick? Has your mother alienated you? Did he provide for you or were you Cold and hungry? When you're done asking yourself questions, remember that forgiveness heals YOU, not Him!

Ooh boy that hit me hard