I know your heart is pure and you still believe there is goodness in him. You easily overlook all his flaws.

You keep on forgiving him for everything, even though you hardly ever hear him apologize. You stay, you keep on holding on to what once was, what still might be, because you believe that your love will change him.

What you don’t want to admit to yourself is that nothing ever changes. No matter how hard you try.

No matter what you do differently. No matter how many times he says he will change.

He will always stay the same. His behavior will never change because he thinks he is entitled to you and your love, no matter what.

He is taking you for granted. He knows how much you care.

He knows you have forgiven him countless times in the past. So, he relies on your soft heart to excuse the inexcusable, to forgive the unforgivable, in the future too.

You are already exhausted from everything. He drained your emotions.

He turned those tears on your face into waterfalls when he should have never caused them in the first place. Yet you stay.

But that man never existed. It was all a facade. He pretended to be good to lure you into his web of lies.

He made you believe that he could be trusted, he made you think you could rely on him when things got bad, he showered you with attention and affection, he pretended to be someone he was not.

All that affection and attention you shared at the beginning of the relationship turned one-sided. It was all up to you to keep things going.

It was up to you to make all the necessary efforts. But somehow he didn’t see it, or he refused to acknowledge it. He just took all that you gave him.

He didn’t mind being your priority, the one who made you put all your troubles aside and concentrate on his. He burdened you with his problems.

And you took them as your own. You gave all that you could in trying to help him. But it was never enough.

Nothing you ever did was enough. He always wanted more.

And when he would see that he had taken things too far he would slow down a bit, charm his way into that huge, soft heart of yours and pretend like nothing ever happened.

After a while, after you would begin to feel loved again, he would get back to his old ways.

Your relationship with him is like an enchanted circle, made up mostly of pain, with glimpses of happiness. And those glimpses are everything you are holding on to.

You base your future on them. You build your hopes on them. You still believe that he is a good person deep down and that he will change.

But the sad truth is he will never change. He doesn’t need to. He is just fine the way he is now.

He likes having someone like you around. Someone who will be his best friend and his lover.

Someone who supports him and always has his back. Someone who would sacrifice her own happiness for the sake of his. Someone who gives her all without expecting anything back.

He is comfortable with this situation. He has everything going for him. You are the one who feels bad, used and neglected.

You are the one who desperately wants him to change. But he never will. He will always stay the same.
He doesn’t know any other way.

All the love you believe he has toward you, even though you don’t see it that often, is his tool of manipulation. He wants your love, empathy, and strength so he could take them away from you.

Sadly, the only person he loves is himself and he is unable to give back anything that you are giving.

If you stay, nothing will change. Nothing will ever get better. You will feel lonelier than you ever would be on your own.

Tears will fall again, your soft heart will crumble from the lack of love. He will never be able to reciprocate all you are giving.

Staying will only bring you more pain. He will just keep on breaking you bit by bit until he destroys you completely.

If you stay, you will never be happy. He doesn’t have it in himself to make you happy.

That’s why it’s time you return your happiness to your own hands—it always belonged there anyway. You have to be stronger than yourself. You have to love yourself as much as you love him and even more.

You have to think of yourself and put yourself first because no one else will.

Can’t you see you deserve so much more? You deserve all that you are giving.

You deserve it with somebody else, somebody who will see you for the precious jewel you really are. You simply placed your soft heart into the wrong hands.

That heart beats only with hope for change—change that will never come.

So please stop hoping that he will change, because deep down you know he never will. It’s all up to you now. You have to stop giving him endless chances.

He will waste them all. You have to stop wasting your life, energy, and love on someone unworthy.

You have to realize that you deserve to be loved. You have to start loving yourself more. 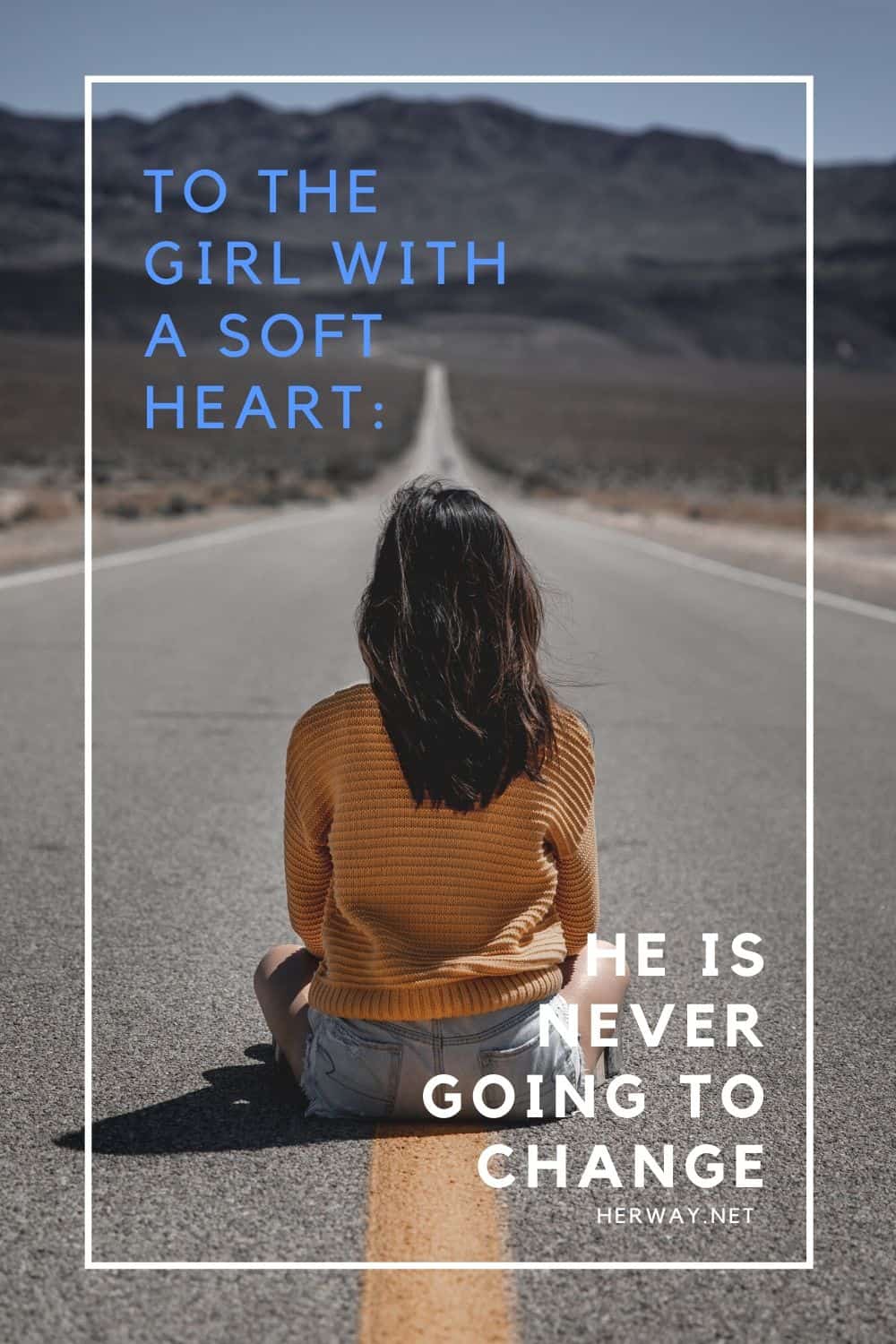