Would you believe me if I told you that there is a way to know for sure when a Capricorn woman is done with you for good? You better believe me because I’ve even prepared the most definite signs that can help you figure it out.

A Cap lady is truly a once-in-a-lifetime woman. She’s real wifey material, and if you allow yourself to lose her, you’ll regret it sooner or later.

She won’t break up with you because of another man because when she decides to commit to someone, she has eyes only for that guy. So, if she decides to make you a part of her past, you’re the only one to blame.

So, the question all of you dating a Cap girl want to know is, How do you know when a Capricorn woman is done with you? Let’s not keep you waiting anymore – here are the signs that can help you answer that question.

1. She’s isolating herself from you 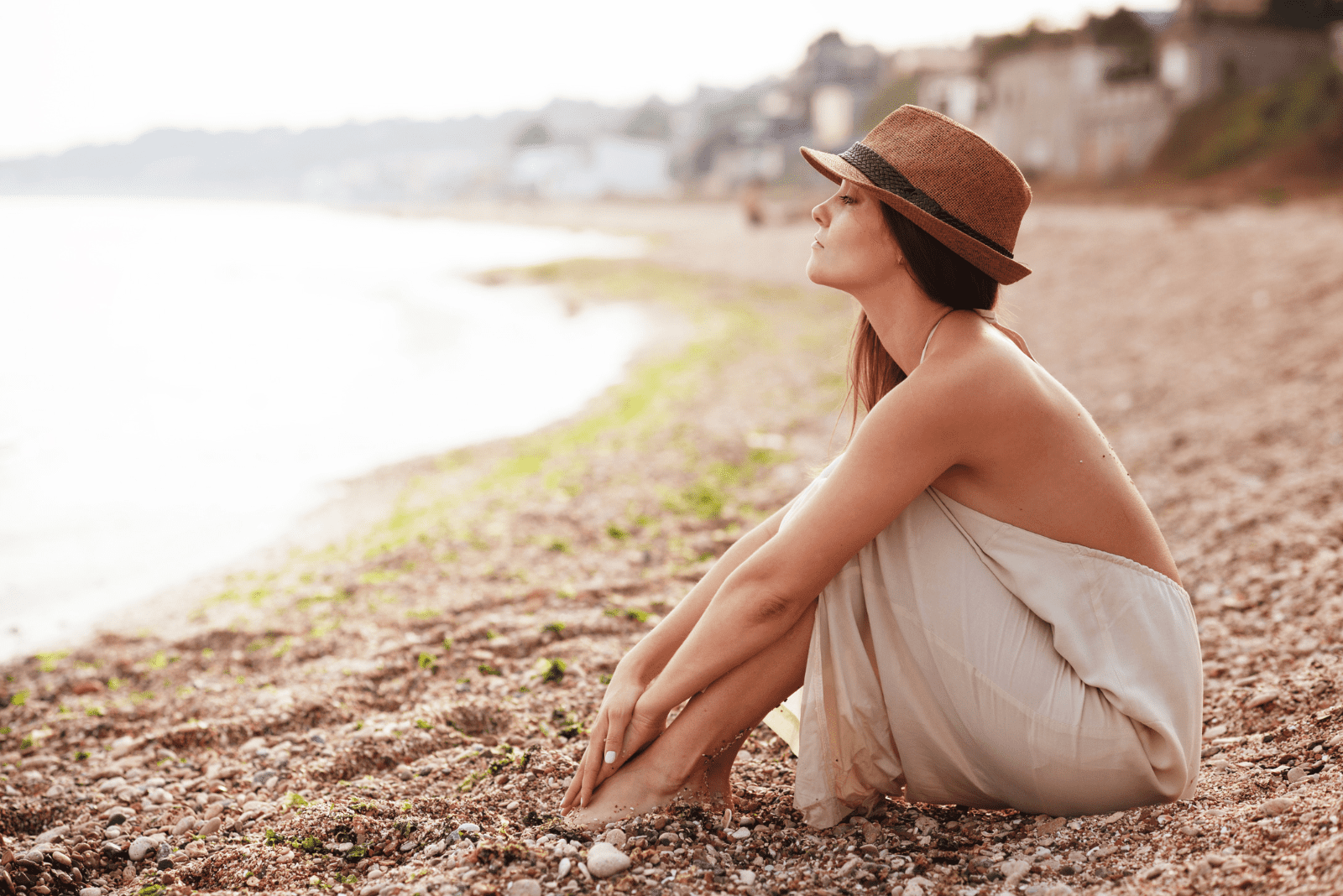 If you notice that your Cap lady has started distancing herself, it’s a sign she’s preparing to leave you. Perhaps she’s doing it because she needs some alone time to rethink your relationship, but the most likely thing she’ll do is break up with you.

One thing that is clear about a Capricorn woman is that she likes her personal space even when she’s dating someone. However, it’s also a fact that she’ll never isolate herself from a man she loves, at least not as long as she has strong feelings for him.

2. Her work becomes her main interest

Gemini, Capricorn, and Aries women are strong and ambitious females. They set clear goals for the future, and they don’t stop trying to reach them until they get what they want. Their work life is very important to them, but it’s definitely not the most important thing.

A Cap woman always prioritizes her family and loves life above anything else. That’s why if you notice that she has changed her priorities and put her job ahead of you, you should consider it a sign her feelings for you have disappeared.

3. She makes all decisions by herself

Were you part of her decision-making process? That’s probably because she thought your relationship was serious and saw you as a part of her future.

The bad thing is that if she decides to continue making all decisions by herself, if she doesn’t ask for your opinion anymore, it’s a sign she’s done with you, and it’s forever.

4. You’re getting used to constant criticism

It’s true that Capricorn women are their own biggest critics. They’re never completely satisfied with themselves, no matter how good they look or what they do.

However, they’re never critical of their loved ones because they always pay attention not to hurt their feelings. So, if your Capricorn woman has started criticizing you all of a sudden, it’s a sign she no longer cares about you at all. 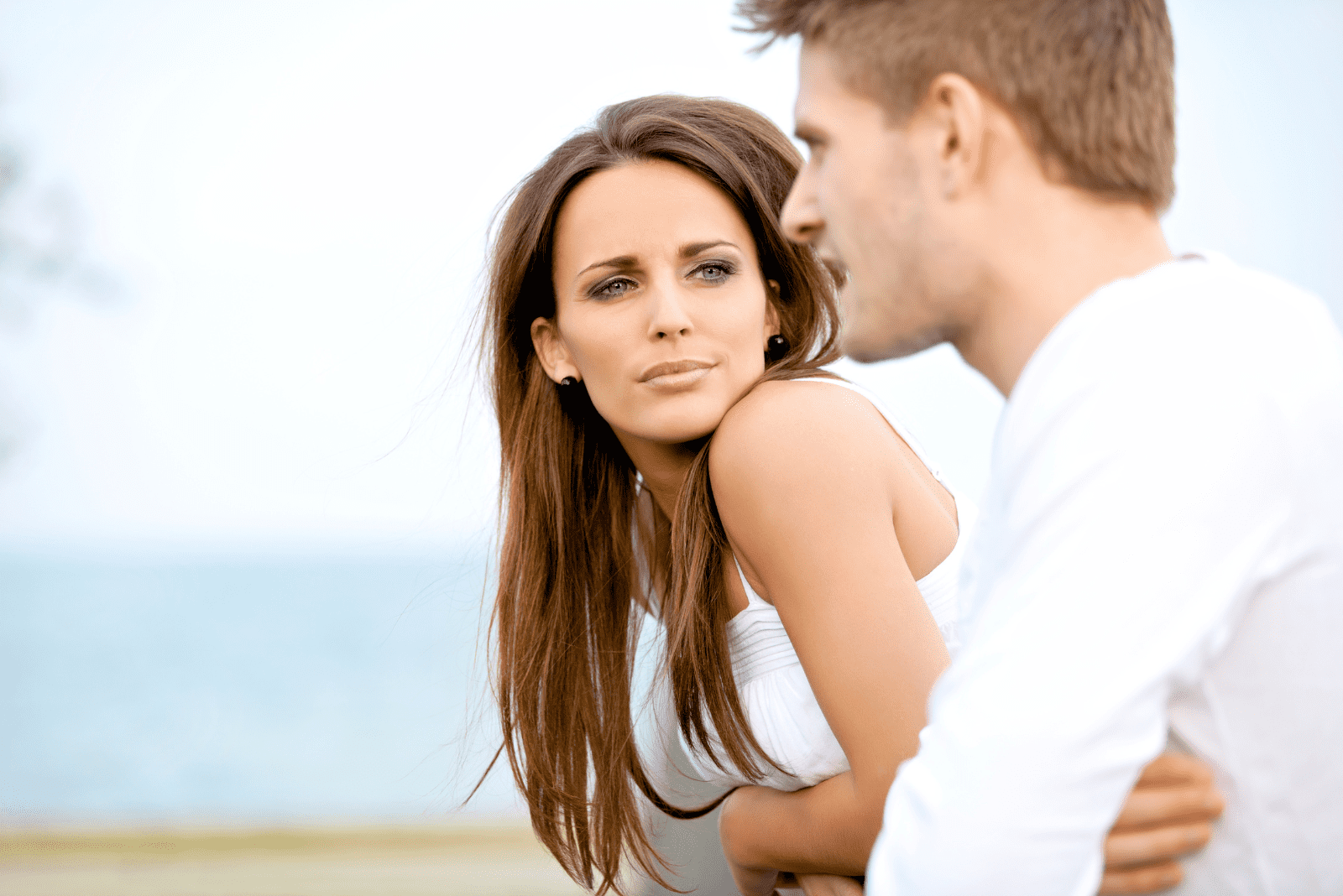 Wait, wait, you no longer have sex? You don’t even cuddle anymore or have any kind of physical contact? Believe me, it’s a huge sign your relationship is dead.

Sagittarius, Capricorn, and Libra women care deeply about physical intimacy in a relationship. They think it’s what keeps the spark alive, and they’re absolutely right. So, if your Cap lady has lost interest in that part of your relationship, she’s done with you, and that’s for sure.

6. She won’t try to understand you anymore

Gemini women, along with Cancer women, are the most unsympathetic females in the horoscope. On the other hand, women born under the Capricorn sun sign are known as caring and empathetic, especially as romantic partners.

However, they can seem a bit emotionless and indifferent towards those they don’t care for. That’s why if you notice that she no longer understands your needs, you should see it as a huge red flag that she’s stopped caring about you.

Most astrologers agree that Capricorn women tend to be very negative and pessimistic. However, I wouldn’t agree with that because the Cap girl has a unique sense of humor, and her circle of friends get it and know how fun and interesting she is.

On the other hand, it’s true that she starts spreading negative vibes around those she can’t stand. You should really be worried if she introduces you to that dark, pessimistic side of her.

8. You get strange feedback from her friends

Have her friends started avoiding you? Or, maybe you’ve heard that some of them are talking about how you and your Cap lady are no longer in a relationship?

You shouldn’t hold grudges or be angry at them because it’s probably something your girlfriend told them. They wouldn’t be spreading that gossip if she didn’t give them the material to do so or if she didn’t allow them to.

9. She doesn’t even care about fighting with you anymore

Fights are a completely normal part of a romantic relationship. When you’re with a woman who knows her worth and is never afraid to speak up for herself, it’s definitely inevitable that you’ll have disagreements and quarrels.

And it’s good – as long as she wants to fight with you, it’s a sign she also cares about you. The fact is, the moment a Capricorn woman stops fighting is the moment she gives up. 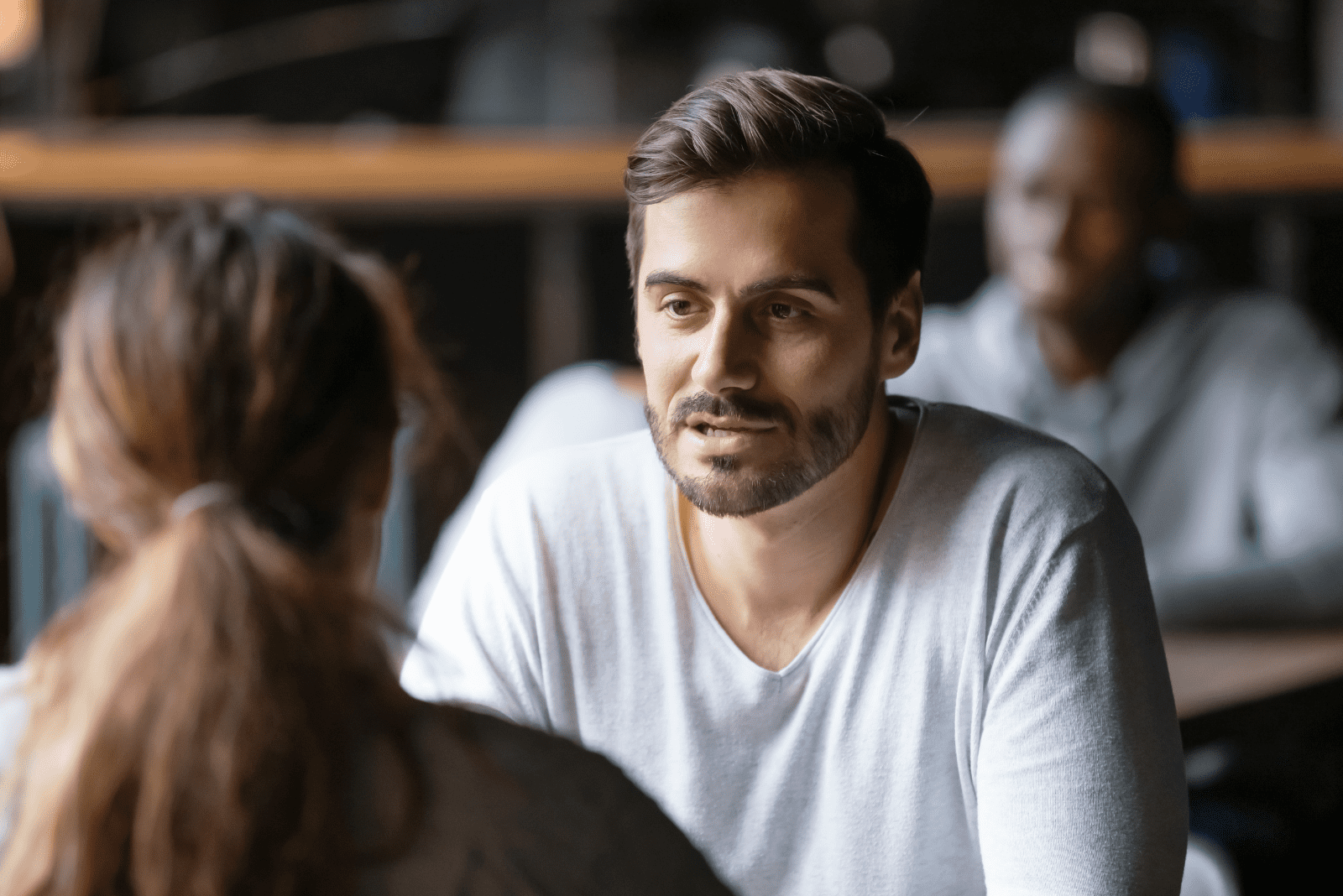 No matter all the other proof and signs, as long as your Capricorn girl is talking to you, you should know that there is still hope that you can keep her by your side.

However, if she decides to cut off communication and starts avoiding you, it’s the last definite sign that she’s decided to break up with you for good.

11. She acts so cold, you don’t recognize her anymore

Women born under this earth sign are slightly cold and reserved by nature. However, once she falls in love with a man, she opens up to him and allows him to get through to her emotionally.

On the other hand, if she falls out of love, she immediately shuts down to that man again. The first time you notice your Capricorn woman is distancing herself and pulling away, you should react immediately and work on strengthening your connection.

12. She’s sure she deserves more and better

The worst thing is that she tells you this directly. She starts mentioning every single mistake you’ve ever made while dating and rubbing those mistakes on your face.

While at the same time, she emphasizes her qualities and all the times she’s helped you and done something nice for you.

She doesn’t do that to brag about herself or humiliate you – she’s mentioning all those things as proof that she really does deserve better and that you’ve lost her because you didn’t treat her the way she deserves.

See also: Capricorn Woman Eyes And 7 Things They Say About Her 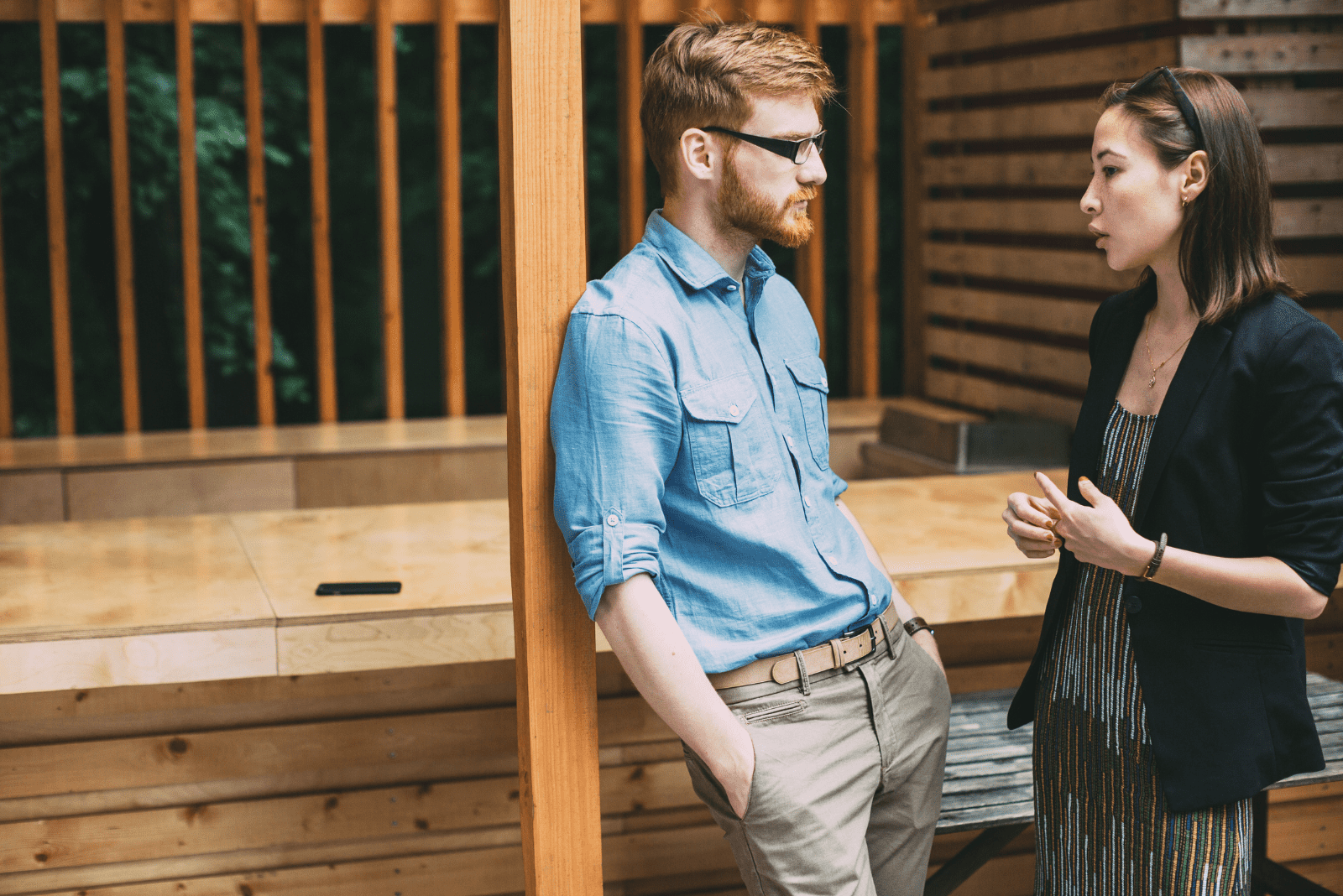 In most horoscope compatibility reports, you’ll find that Taurus and Scorpio men are perfect matches for a Capricorn lady, and they most surely are. However, along with them, Virgo men and Capricorn women also have great potential to build a harmonious relationship.

Aries men and Capricorn women are also great pairings. And with just a bit of effort, Pisces men can also win over the hearts of Cap women.

Capricorn men may find it hard to get along with a Capricorn woman because their egos are too similar. Leo men will also struggle to find common ground with Cap ladies because of their completely different natures and personalities.

Libra men can establish a friendly relationship with Capricorn females, but they’ll find it hard to maintain any kind of romantic relationship. Aquarius males have opposite perspectives to Capricorn women, and this is the main reason they have such low compatibility.

What Do You Do When A Capricorn Woman Ignores You?

There is one thing you shouldn’t do by any means: don’t start ignoring her and think that it’s the best option to make her regret ignoring you.

If she’s ignoring you, you need to show her that it’s bothering you because you care for her deeply, not the other way around. You need to forget about seeking revenge and focus on gaining her attention again.

The first step you should take is to find out what could have made her ignore you because, I guarantee you, there must be a reason. Once you find the cause, you deal with it, and your efforts will make your Cap lady change her mind.

How Do You Make A Capricorn Woman Miss You?

One thing you need to understand about Capricorn women is they’re not the kind of women who’ll chase after you if you start ignoring them (like Pisces women, for example). The only way you’ll keep a Cap lady interested or make her miss you is by showing her your true qualities.

You need to remain in touch with her. Keep texting her, even if she doesn’t reply at first, because she’ll start replying after a while.

Remind her of the good times you had and the great memories you created together. Flirt with her and behave as if you’ve just met her and as if you’re trying to win her over. Be romantic, kind, and affectionate, and she’ll have no other choice but to miss you like crazy.

How Do You Melt A Capricorn Woman’s Heart?

Try to find out what your Capricorn woman likes and dislikes. Don’t play games but be direct about your feelings. Let your body language show her that you like her.

Also, even though most people find them serious and stiff, Cap women generally like funny jokes. So, if you have a good sense of humor, it might be your weapon in winning over the heart of your Cap lady.

Compliment her but keep your compliments genuine. Make sure she knows you’re a reliable guy – that is, be there whenever she needs you.

Most importantly, show her that you’re an ambitious man who is all about hard work and achieving his goals. That’s the best way to earn her respect and settle down in her heart permanently.

To conclude, how do you know when a Capricorn woman is done with you forever? Loss of communication, effort, commitment, and connection are the most obvious signs you’ve lost your Cap lady once and for all.

And to answer your next question, it’s hardly ever possible to get a Capricorn woman back, especially one who has already decided to move on. Determination is her most significant personality trait, and she’ll definitely never allow herself to waste her time on a man she thinks doesn’t deserve her.

Losing this kind of woman will be the biggest mistake of your life… One you’ll regret forever. So, you should react to the first red flag you notice and do whatever it takes to keep her in your life. 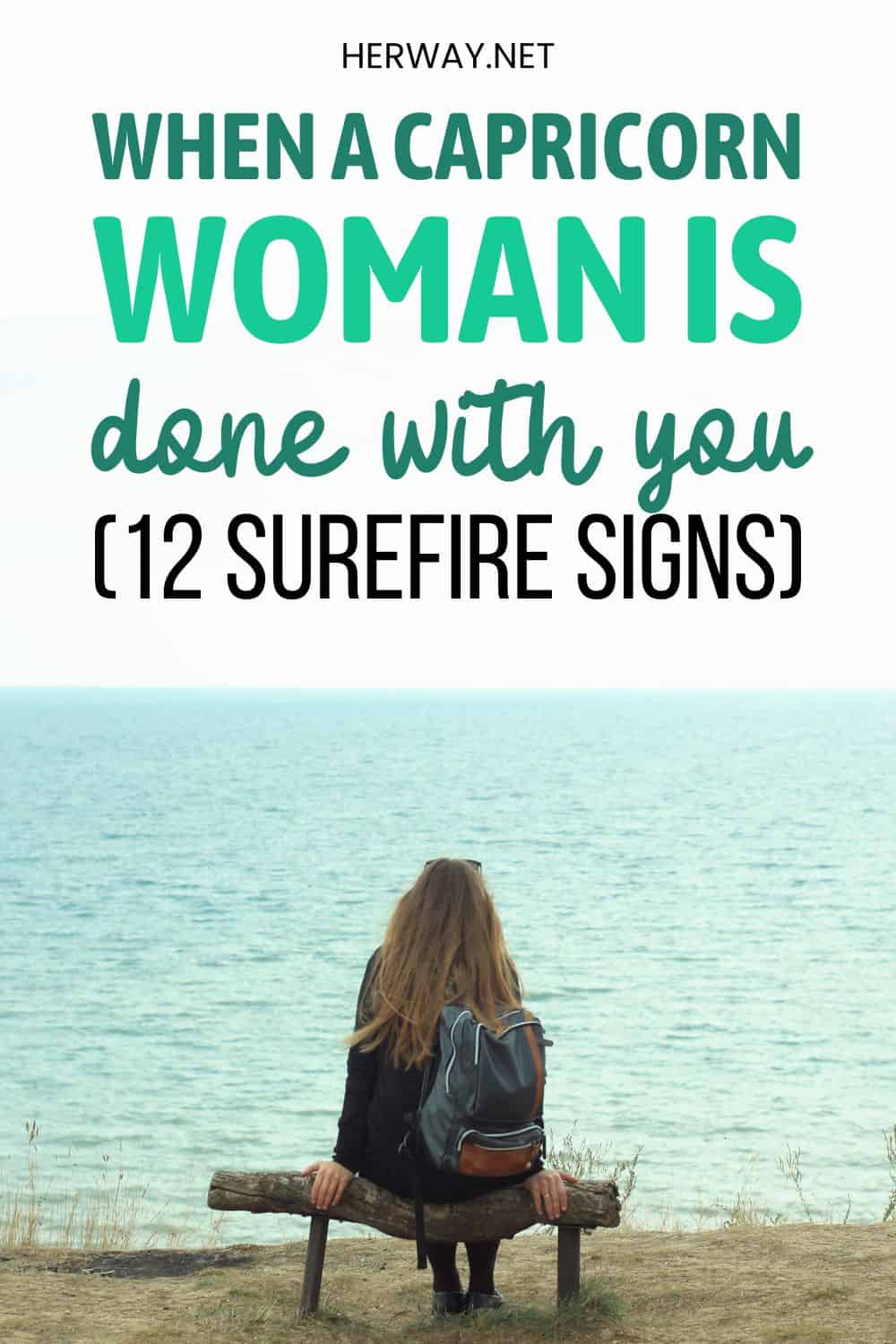