When this girl met you, she thought that you were everything she’d been searching for in a man.

After all those failures, after all those toxic men and unhealthy relationships, there you were—her reward for all the suffering she’d been through, her perfect man.

When she first met you, you acted like the guy of every girl’s dreams. A man she could count on; a man who would be her rock and the wind to her wings.

A man who would give her the butterflies she craves but also the safety she needs.

The best part was that you loved her back. Or at least, you acted like you did.

What else could a girl wish for? Well, I’ll tell you what—an honest guy who doesn’t act like he is something he is not. A guy who isn’t actually a narcissistic asshole who wears the mask of this perfect man just to get inside her heart, so he can break it later on.

However, this is exactly what you turned out to be—a man who never loved her for real. A man who just pretended to love her while you actually couldn’t care less about her.

A man who played games with her. A man who manipulated her into believing that his feelings for her were honest.

One morning, out of the blue, you walked out of her life. You turned your back on her, and you never returned.

So, no, you never loved her because you don’t break the hearts of the ones you love. You don’t promise them the paradise, just to make their life a living hell.

You don’t make them believe that they’ve reached the stars just so you could knock them off of their feet.

You don’t go around convincing them that you are a dream come true when you are nothing more than a real life nightmare. You don’t leave them hanging when they need you the most, without caring how they will survive.

You don’t make them suffer, and you don’t turn your back on them without a reason, proving to them that they never matter to you.

When you love someone, you don’t move on with your life, leaving them in the past, as if they never existed. You don’t forget about them overnight, and you don’t leave them wondering if everything between the two of you was nothing more than a big, fat lie.

You don’t use their emotions to boost your broken ego and you most certainly don’t deceive them just to reach your goals.

However, that was exactly what you did to this girl. You treated her vulnerable heart as a toy and you threw it away like a piece of trash once you were done with it.

Nevertheless, you didn’t complete your mission because guess what—you didn’t break her, as much as you wanted to.

That she keeps on blaming herself for being such a fool who believed your empty promises and for falling for your mind games. That she can’t believe how come she failed to see your true colors in time and how she could have allowed you to deceive her like that.

The truth is that she is hurt by the fact that she wasted years of her life on a lie that was never real, on a man she never knew, and on a man who never actually existed.

However, all of this doesn’t mean that she won’t survive. Because one of these days, she will rise from the ashes of her crushed heart.

One morning, she will wake up and she will realize that you don’t deserve to have a place in her life and her heart anymore. That you were never good for anything besides pretending and that she is way better off without you.

That all of this was nothing more than a painful lesson which helped her become stronger.

One of these days, she will be happy again. And you? You will always remain the same piece of shit you’ve always been. 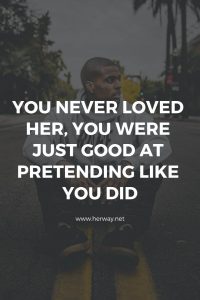