Before you started dating an Aquarius man, you probably imagined that your romance would be something like The Notebook or some other romantic movie. Trust me, we all did.

As your dating progressed, the questions multiplied in your head. One of them is: Are Aquarius men jealous?

We all know that this air sign is curious, intellectual, and social. They are also known for being big thinkers. Here’s one of the not-so-positive Aquarius traits: They are famous for being distant in relationships.

In other words, Aquarius men have difficulty expressing their emotions (especially negative emotions) as well as their feelings of jealousy. When that happens, their partner can lose their mind trying to figure out what exactly is going on in their head.

I totally feel you. This would drive anyone insane. So, here’s the truth: Aquarius men are jealous, but they avoid expressing it directly, and they refuse to talk about it.

Actually, they express jealousy in different, subtle ways, which we will cover below.

Contents show
1 Are Aquarius Men Jealous? Yes, They Are!
2 How Do You Know If An Aquarius Is Jealous?
2.1 1. He acts distant
2.2 2. He refuses to talk about it
2.3 3. Possessive behavior
2.4 4. He wants to make you jealous as well
2.5 5. Controlling behavior
2.6 6. His regular quirkiness doesn’t feel right
2.7 7. He confronts you in a weird manner
3 Do Aquarius Men Get Possessive?
4 Final Thoughts On “Aquarius And Jealousy”

Are Aquarius Men Jealous? Yes, They Are! 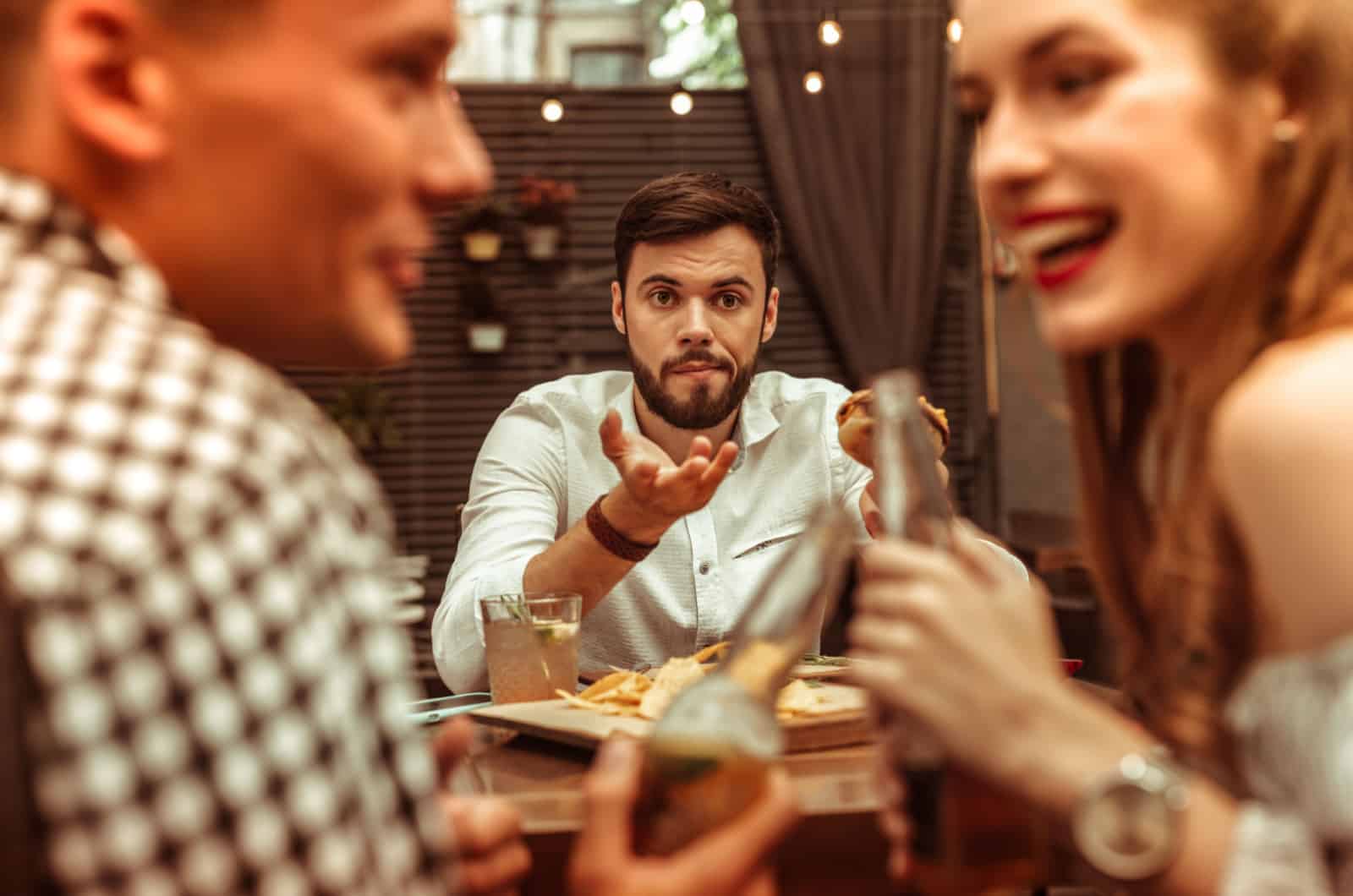 I just wanted to share my personal experience with an Aquarius man. So, I dated this guy two years ago, and at first, everything seemed idyllic. (Well, it always does.)

I remember one day, he suddenly started acting distant. I had no idea what was going on. Did I do something to make him mad? Did something happen to him, and he didn’t want to share it with me?

My overthinking skills didn’t help me at all. The more I thought about it, the less I knew what exactly was happening in his head.

So, I decided to ask him.

When I asked him why he was acting so distant all of a sudden, he told me that I was imagining things and that he was perfectly okay. Hmm…okay.

Well, that guy was a friend I hadn’t seen for a long time then. He complimented my looks in a funny and slightly hot way, but I knew he was only joking. Apparently, my ex-boyfriend, Aquarius, didn’t know that, so he became jealous.

If you’re going through the same at the moment, below you’ll find all the ways Aquarians express their jealousy. I bet it will save you time and nerves.

How Do You Know If An Aquarius Is Jealous? 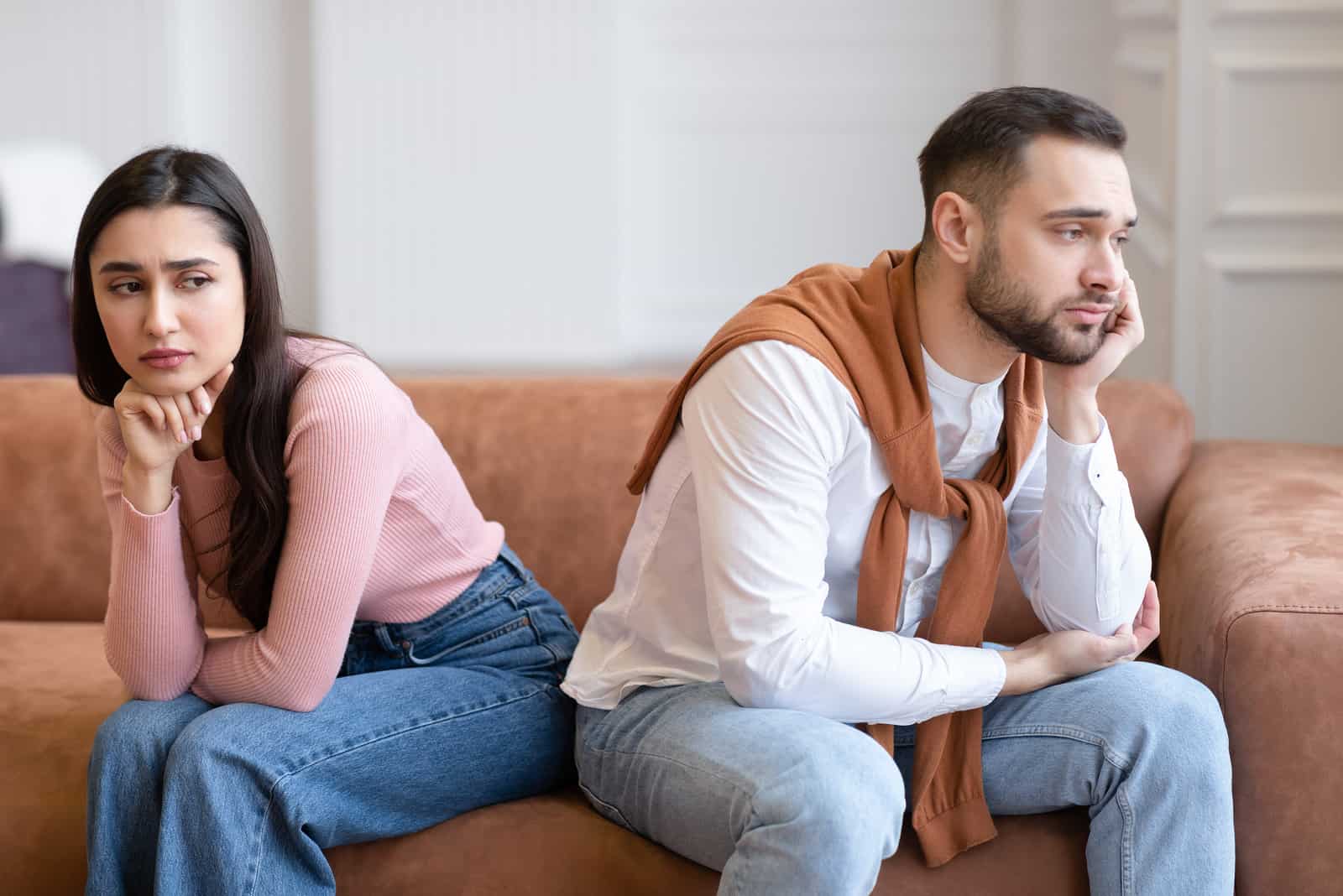 You know an Aquarius man is jealous if he suddenly acts distant, controlling, or possessive. If he’s jealous, chances are he will also want to make you feel jealous.

As you can see, Aquarius men experience jealous feelings, but they cope with it in their own unique ways. Since they act reserved in relationships, here’s how they behave when it comes to jealousy:

Here’s the thing. If an Aquarius guy needs to deal with uncomfortable emotions, he will IMMEDIATELY become distant. That’s one of the subtle signs of his jealousy.

Don’t get me wrong. He’s not trying to play mind games with you – he just shuts down like a computer and refuses to talk to you about anything.

I swear that Aquarians are the most difficult of all the zodiac signs when it comes to this. When they act distant, you simply can’t ignore it. You feel with every pore of your being that something’s not right, but you simply don’t know what exactly.

If you call him, he won’t answer.

If you text him, he won’t text you back.

If you ask him what’s wrong, guess what happens? Read the next sign.

2. He refuses to talk about it

Yup. If you ask an Aquarius man to talk about his feelings, all you’ll get is SILENCE. Blessed be the ladies who end up with Scorpio, Capricorn, and Taurus men! Amen. 🤣

Aquarius men have their own qualities, but when it comes to expressing their feelings, including jealousy, they are really bad at it. They’re so bad at it that neither do they know what they’re doing.

Because Aquarius men like to be in control. Uncomfortable emotions like jealousy make them feel out of control, and they don’t know how to deal with it.

They try to hide their own feelings of jealousy because they’re so bad at self-expression. Maybe the will is there, but they haven’t found a way. This is especially true for an Aquarius man in love who is overwhelmed with so many emotions.

When you add jealousy to it, you get a distant Aquarius man who has a hard time telling you how he feels. Should we blame him for that? I don’t think so. 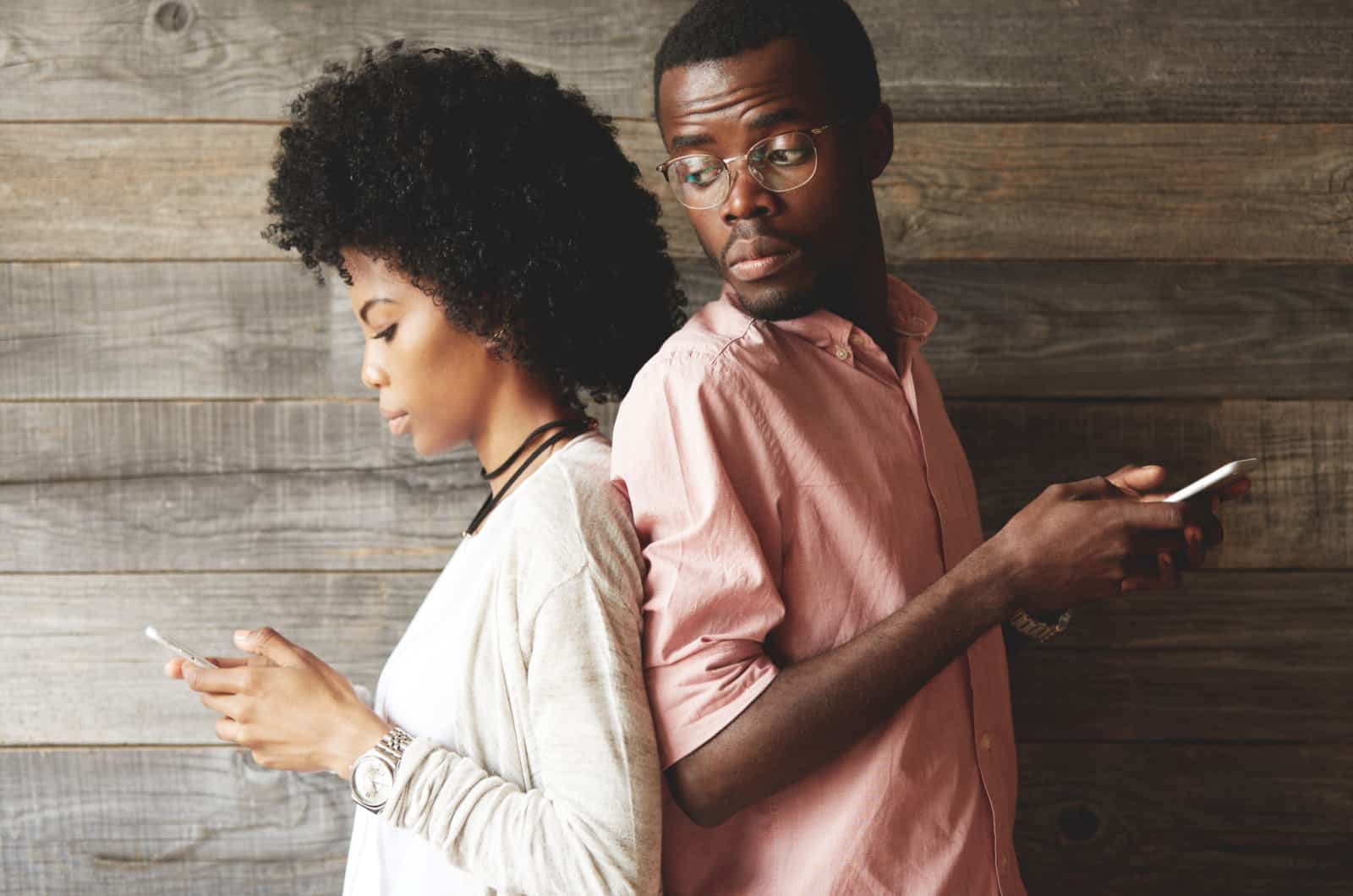 This is probably one of the worst signs of jealousy and trust issues when it comes to Aquarius. Instead of talking to you about it, he might become overly possessive of you.

If you’re in a group of people, he will become glued to you so that you can’t talk much to other men. If he notices that other men are commenting on the photos you post on social media, he will demand to know everything about them.

Also, he might start calling you every hour just to ask where you are and what you are doing. Possessive behavior in a relationship can be a huge problem because it’s suffocating and toxic.

No, there is no excuse for possessive behavior, and the sooner you talk to your Aquarius man, the better it will be for both you and your relationship.

If you’re thinking about ignoring an Aquarius man, know that this might result in consequences such as him becoming even more aggressive or pulling away.

4. He wants to make you jealous as well

Are Aquarius men jealous? Yes, they are. Actually, a jealous Aquarius man will want to make you jealous as well. Wondering why?

Because he feels like you’re the one to blame for his current state. Given that he doesn’t know how to deal with his emotions, he will instantly start looking for a culprit. In this instance, that culprit would be you (even if that’s probably not the case).

So, you can expect him to start flirting with other women in front of you, start commenting on other girls’ appearances or pics, and similar.

He might even start spending all of his free time with a female colleague or a female friend. He’ll do all that to evoke feelings of jealousy in you. Clearly, his jealousy is unhealthy.

This is one of the most obvious signs Aquarius man is jealous. The main reason why Aquarius men can’t deal with emotions is because they make them vulnerable. When he is jealous, an Aquarius man feels like he needs to establish control over his emotions.

Since he’s really terrible when it comes to things related to feelings, he will try to control you as a way of controlling his emotions. It may sound a little confusing, but I’m sure you understand what I’m trying to tell you.

His controlling behavior towards you is the result of his helplessness when it comes to dealing with his emotions. By controlling you, he thinks he’s in control of the entire situation, including his feelings.

How does an Aquarius man exhibit his controlling behavior?

By demanding to know all about your whereabouts, those close to you, and literally everything you do. He will also be less willing to ask for your opinion on things. Instead, he’ll demand that you do as he says because “he knows best.”

Controlling and possessive relationships are a real struggle. Open and honest communication is the key to a happy relationship.

See also: Zodiac Signs Ranked From Most To Least Jealous 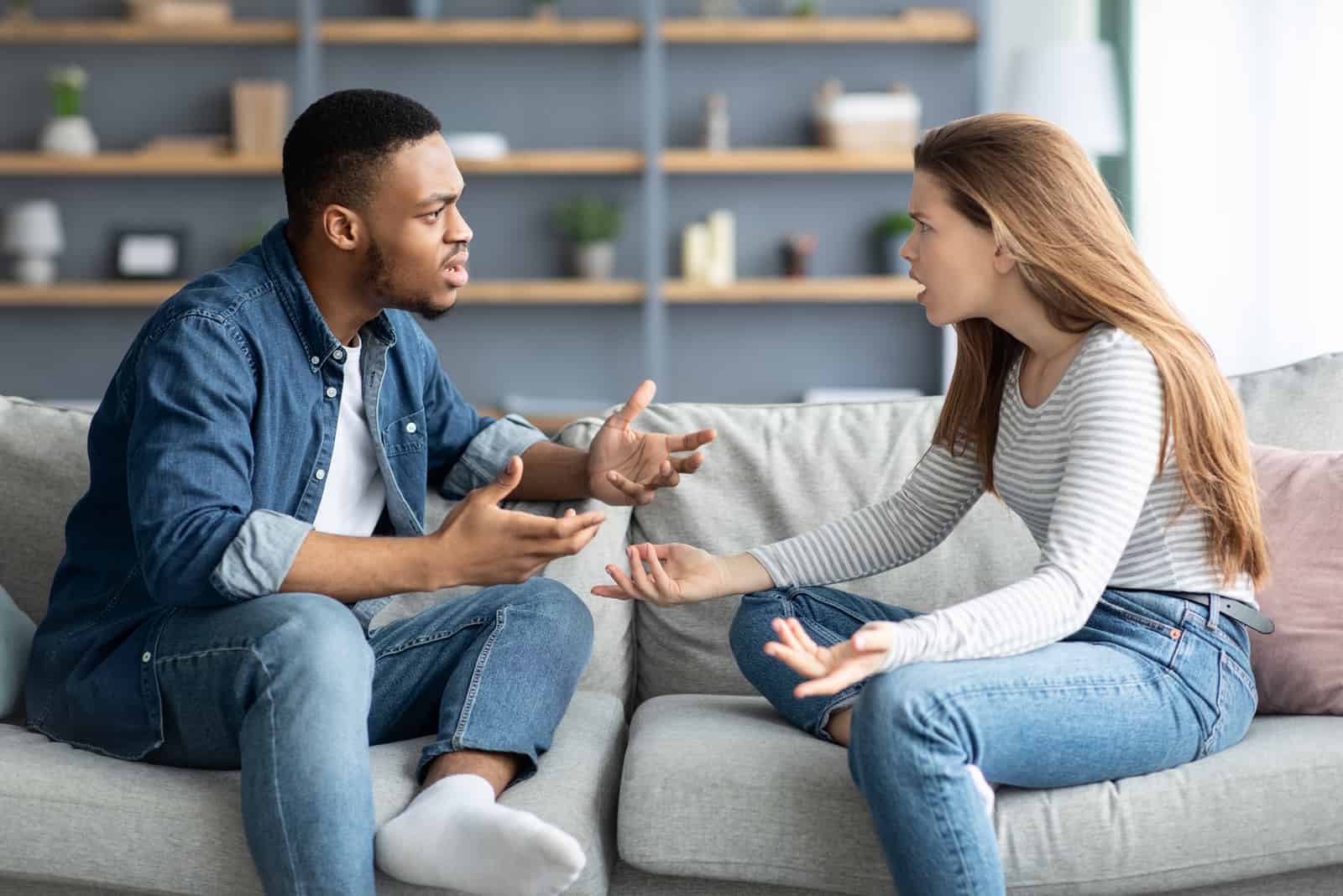 Normally, an Aquarius guy acts in spontaneous ways. He’s relaxed, in the mood to make some jokes and tease you. His quirkiness is exactly why you’re so attracted to him, right?

And now, SUDDENLY, all of this is gone. His regular quirkiness doesn’t feel right, and you have no idea how you should feel about it. It feels like he’s become a different man (a man you definitely didn’t fall in love with).

Now communicating with him feels awkward. There is no more comic relief in your conversation, and he doesn’t seem relaxed. Instead, his behavior is reserved, and his body language is tense.

His regular quirkiness has become regular suffering. If you ask him to tell you what’s bothering him, he will say something like: “Why would something be bothering me? I’m perfectly okay.”

Worst of all is that we women start to think the problem is us. We start asking ourselves: “Is an Aquarius man testing me?” So, we start looking for ways to “win him again” and restore his initial personality.

If you want to make an Aquarius man miss you and chase you, just leave him alone until he comes to his senses and eventually tells you what’s bothering him. Don’t do anything while he’s in this state because you might make things even worse.

7. He confronts you in a weird manner

I don’t know if you know this about Aquarius men, but when they are dealing with feelings of jealousy, they start confronting you. What’s interesting is that they don’t do it directly.

For example, he will confront you for millions of other unimportant things only to get that temporary sense of relief. He desperately needs someone to blame for his current emotional state.

So, yes, he will confront you on a daily basis for banal things like not throwing out the trash, forgetting to wash dishes, and similar. He will make you feel like you committed a serious crime for not doing some chores.

Still, this doesn’t mean that an Aquarius man likes to see you suffering or that his jealousy is the result of your low compatibility. He’s just dealing with his emotions in his own, complicated way that neither you nor me can fully comprehend.

Do Aquarius Men Get Possessive? 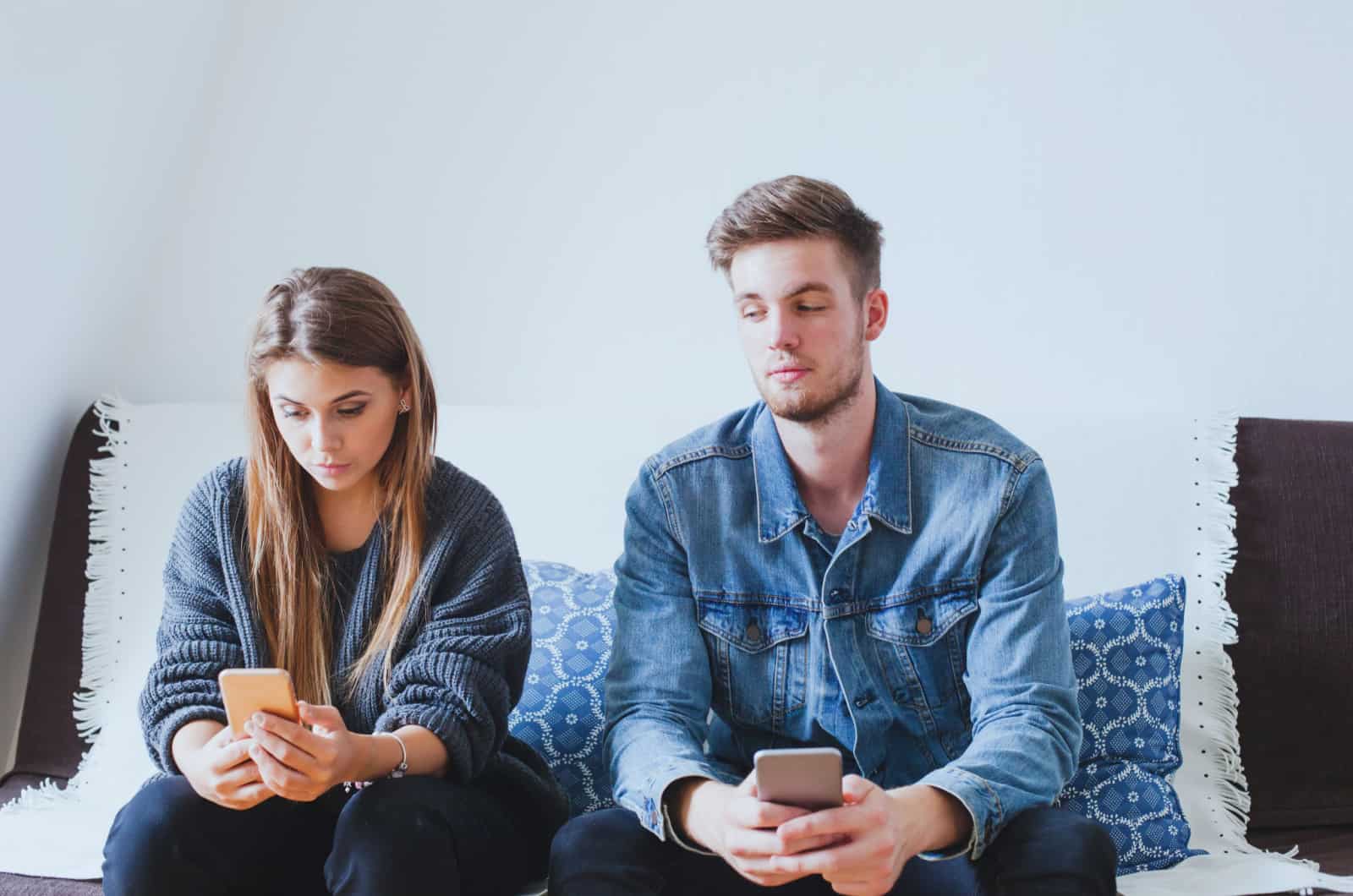 Yup. Aquarius men get possessive mostly when they feel jealous. They don’t know how to deal with their emotions, so they feel out of control. They get possessive out of fear that they’ll lose the person they love.

Because of that, they become overprotective of their loved ones, demanding to know everything about the people they hang out with and the places they go.

Some Aquarius men are deeply insecure by default, which means they don’t need jealousy to trigger their possessive behavior. Beware of such men because they can make your life a living hell.

Now, when it comes to an Aquarius man who becomes possessive only as a result of feeling jealous, you shouldn’t worry much about it. As soon as his jealousy episode passes, so too will his possessiveness.

Let me summarize all this:

Are Aquarius men jealous? Yes. Do Aquarius men get possessive? Yes. In some cases, their possessiveness is linked with jealousy, while in others, they are possessive by nature.

Final Thoughts On “Aquarius And Jealousy”

Are Aquarius men jealous? Yes, they can be pretty jealous. They display their jealousy in their own unique ways, meaning they become distant, controlling, or possessive.

The biggest challenge when it comes to all this is getting an Aquarius man to talk to you. He will do anything but SAY exactly what is bothering him.

That can drive anyone insane. However, most of them start talking after a few days when they can no longer keep it to themselves. After that, things go back to normal as if nothing happened.

Sounds tiring? Yes. Is it worth it? Yes, if your relationship with an Aquarius man is filled with love and respect. 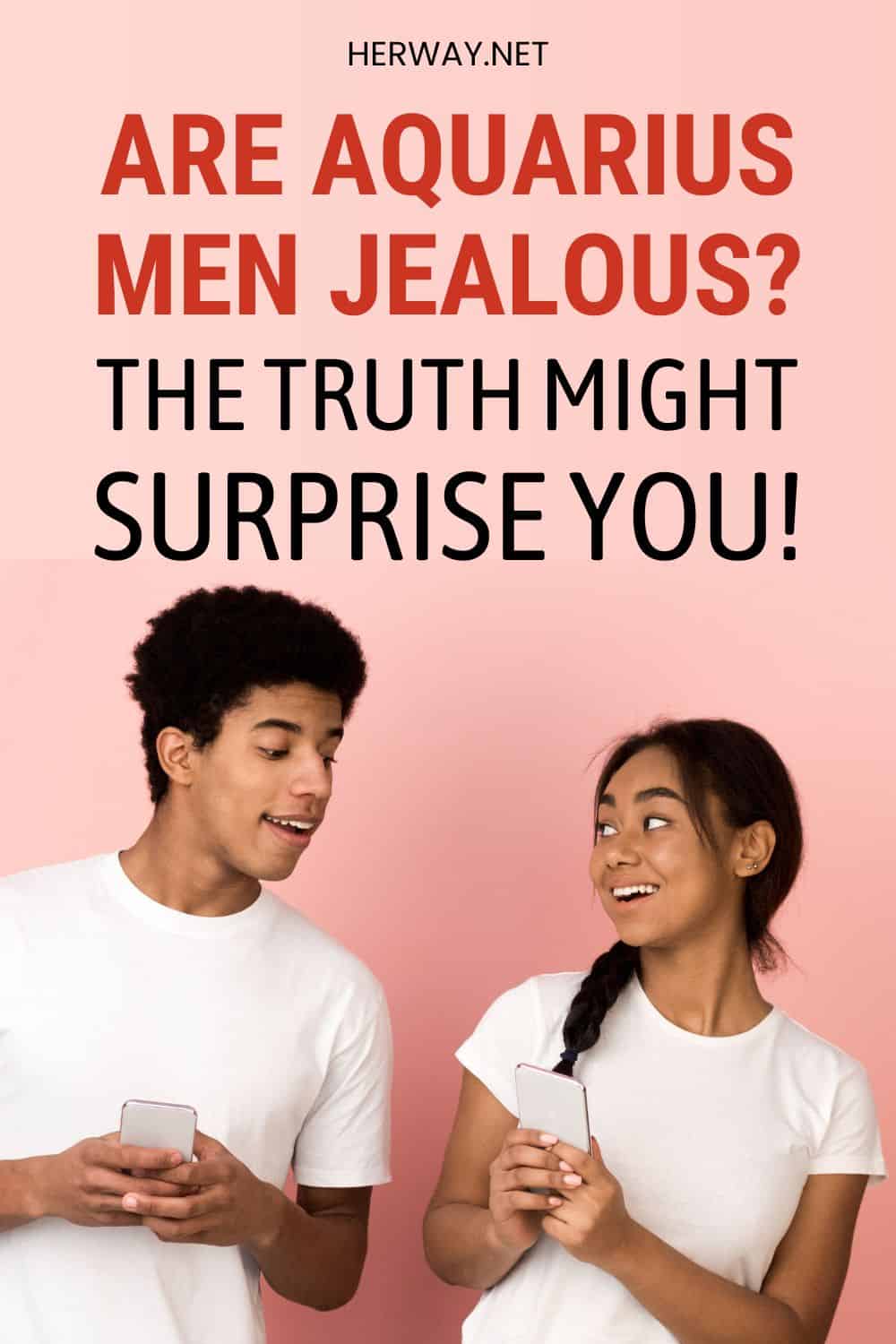