You meet a guy, you’re wary. He effortlessly tells you what you want to hear, you know, that he’s, “Never met anyone like you before”, “You’re amazing”, “You’re beautiful,”… Blah, blah, blah.

It just rolls off his tongue like it’s been rehearsed… You can bet your ass baby girl, that that shit has been replayed over and over again to each and every girl who sets her sights on him. Now you see it, just in time.

You start to let your guard down, you start to let him in and feel real emotions, emotions you haven’t felt for a long while—because you believe this man is perfect for you.

You think, ‘Wow, he’s too good to be true.’ Yep, you guessed what I am going to say next—that’s because they usually are. They are all very well-behaved in the beginning, they are trying to impress you, reel you in. Then BOOM… WTAF?!

Not all relationships start off like this and end in disaster but the ones not worth staying for are the ones that start off oh so magical but then turn out like a scene from Titanic… Tragic.

Run while you still can.

The thing is, there are very few genuinely good eggs left out there. Not all of them are big, fat, phony fakers but you need to know when you are just ‘too good’ for that good for nothing guy.

You are an energetic, full of life, bubbly girl.

You light up the room when you’re in it, people flock to you, you are positive and give off good energies. You live life to the full and have a wicked sense of humor.

He is the complete opposite of you—he’s quiet, never interested in anything other than himself, and overthinks to the point of creating an uneasy atmosphere. He makes you feel like you are attention-seeking, so you pull back to become the person you are not.

NEVER change yourself to be with someone else. They don’t like who you are? They can take a hike. Adios.

You are a thoughtful person, so you are going about your normal day but you constantly spot things that he may like, so you get them him because you want to make him happy.

When the tables are turned—you receive nothing but empty promises. You leave cute little notes for him to find when you’re not with him. He can barely text you back, let alone make such an effort to lift a pen. Are you mad?! Ha. It’s the little things in life that count, so if he isn’t thoughtful with doing the little things, imagine your wedding day…“Do you take…”, “Wait, where is he?!”—need I say more.

You are the only one showing emotions of any kind.

So you’re missing your guy, you freaking love the man in your life, you tell him so but wait… What is this I hear? I thought so, the sound of tumbleweed drifting past. Is it even reciprocated?

How would you know, he barely tells you unless you badger the heck out of him and even then do you believe him? You end up with so many unanswered questions in your head it will drive you crazy.

If your guy won’t open up to you or won’t tell you how he really feels about you, do you really want to waste your time on a guy who may or may not like you as much as you like him?

There are plenty of awesome guys out there who won’t leave you guessing’ HE WILL MAKE IT KNOWN!!

You are the one pulling the relationship through.

Every day seems to be a struggle, too much like freakin’ hard work. You are having to repeat to him how to not treat you, how to treat you, remind him that you are his girlfriend and not one of his guy mates.

There is NO EFFORT whatsoever from the guy who’s supposed to love you. You’re tired but will keep fighting for the both of you.

He thinks everything is fine, you know it’s not. You talk to him about it, he tells you he’s listening but his actions prove otherwise.

When you are the one with the 80/20 ratio in the relationship, you know his days are numbered but how much longer can you actually do this for before you finally break? Before he breaks you, he needs to either suit up or ship out. Boy bye!!

Everyone sees what he has apart from him.

He’s taking you for granted, he knows everyone thinks you’re beautiful, that you’re a catch, that you have this freakin’ awesome personality and you are with him.

He thinks now that he has you, he doesn’t have to do anything to keep you. WRONG. That dude couldn’t be further from the truth. He barely compliments you anymore, you try to get his attention and short of flashing him your boobs, you’re fighting a losing battle.

Girl, if he cannot see what he has and let’s face it, most guys are batting above their average, then his unnoticed becomes another man’s noticed and we all know who the real winner is here. YOU. Leave his ass if he doesn’t love and respect or even NOTICE what he has. Someone else will.

Communication is the key.

Never let a guy make you feel like you don’t deserve his time. You do deserve it, he’s just making excuses— “I am really busy”, “I forgot to reply.” Bullcrap.

He goes to take a leak right, a cigarette break maybe? He has time, he has just become lazy in the way he is treating you. If his communication starts seriously slacking, more so than his attempts to woo you, then I would drop him like a sack of shit because nobody got time for chasing. Let him do the chasing. If he doesn’t chase, you have your answer. You did the right thing.

Your gut is a lifesaver—if something isn’t feeling right, you start to feel overly anxious about the relationship and if he’s the right guy for you. Your gut is telling you something.

When something is right it should be easy, you should love freely, it should just feel right. If your gut is telling you to get out then you need to listen to that bitch because that could stop you from being in a world of pain in the future, more so than what you’re feeling now.

Some guys can and will change if they genuinely want to but if he continues to ignore it after you have told him once about how you’re feeling, then he isn’t good for you.

You never know, he may just pull the rabbit out of the hat and surprise you but if the above keeps happening, then you need to get out of that relationship— the one-sided relationship that’s only working for him. 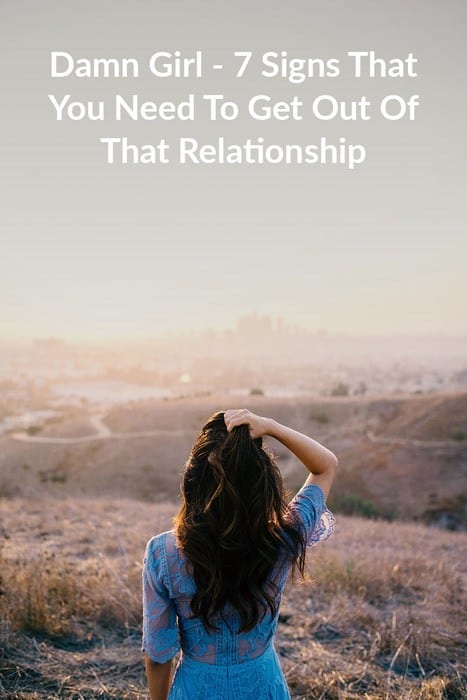