What strikes me the most about love is the people who leave others behind, thinking that they’ll be able to meet the same person they left when they come back.

She was always there for you. God, she tried so hard just to make you happy.

She did see you for who you really were but she always hoped that there was good somewhere there, living inside your soul. She thought that just by loving you, she’d be able to make that good come to the surface.

For so long, she neglected her feelings just so she could attend to yours. She did all this just to show you that there was another side to life besides the dark one you saw.

She did all this because she believed in love.

You sold your soul to the devil. You cared for nobody but yourself.

You were your own priority and you stopped believing in better days a long time ago.

You never truly believed in love, did you? But you still did your best with pulling your sneaky manipulative tricks to have her fall for you.

She waited for so long to see the love that she was giving to you returned back to her. And she could’ve waited for a thousand years more and it still would have been in vain.

Because you were never much of a giver. All you cared about was taking and taking. You thought you deserved it all.

But boy, you didn’t. You only got her kindness and love and attention because she believed you were worthy of it.

It took her a while to see you actually weren’t.

When she saw you for who you truly were, she refused to believe it. When you showed no traits of humanity in yourself whatsoever, she blamed it on the timing.

She thought if she stuck by your side just for a little while, if she fought for you harder, things would change. She believed that there was a time for everything in this world and that your time together was yet to come.

But after a while, it was obvious: the timing was right, it was you who was wrong.

God, this girl wanted nothing more but to love you and be loved by you. She wanted that pure love, the one that gives wind to your wings and makes you feel invincible.

But what your love did was only show her that she was at the bottom of the barrel.

When you turned your back on her, she still felt this immense love toward you. I mean, it would be naive to think that once you were gone, she’d be free of it.

Nobody stops loving just like that. She invested so much of her time and put so much effort in you that it was impossible for her to move on just like that.

Even though you were toxic, you were still loved by her. We don’t choose to whom we give our heart to. Well, in most cases we can’t.

We just fall in love and then struggle with all the baggage that comes with falling in love if we fall in love with the wrong guy.

So, when you left she was hurting. All her dreams and her hopes were shattered. And she was left to wonder if all of her efforts had been in vain.

She was left to wonder if all her love had been in vain. Did she gave all of herself to the wrong guy?

On the other hand, you left without thinking about it twice.

You left as if the woman you were leaving could be find around any corner. But soon, you’ll see how mistaken you’ve been.

No one but her will try so hard for you. No other will love you without holding back, so selflessly and so easily.

No other will put you on a pedestal and forget about herself. No other will care for you even when you don’t deserve it.

And then it will hit you. Then you’ll realize what kind of a woman you had in your life.

Sure, you’ll try with plenty others but none of them will try as hard to make you happy as she did.

By the time you realize all this, it will be too late. The woman you left behind will be gone once you wish for her to come back.

Sure, she’ll still be living and breathing but it won’t be the same woman you left behind.

She won’t be waiting for you, you know? She will have moved on by the time you realize what you had and lost.

What strikes me the most are the people who leave others behind, thinking that they’ll be able to meet the same person they left when they come back.

The people left behind move on eventually. They learn from their mistakes. And once they do, there is no way in this world that they’ll get back to the way they were before.

But you’ll soon come to realize this on your own. 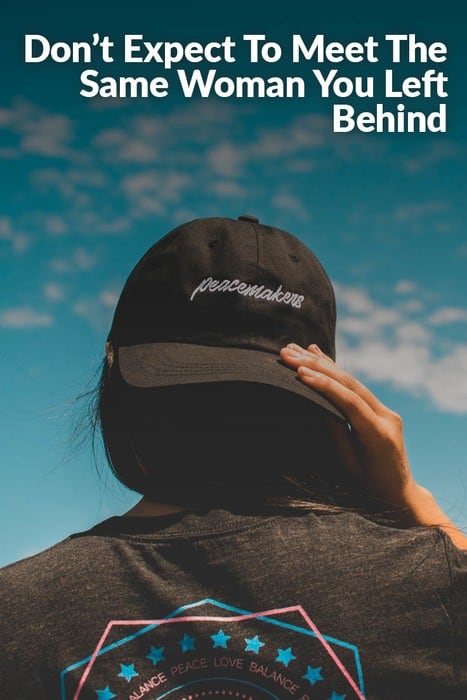