She’s the girl you will spend the rest of your life searching for.

You see, what you failed to notice was the girl standing right in front of you. When she looked deep into your eyes, this girl was looking for you to love her like she loved you. The girl who hugged you so tightly because she was so scared that if she let you go, you wouldn’t come back. You were too self-absorbed and selfish to see the girl standing in front of you slipping away because you thought she would always be there no matter what!

That girl would have been there if you had only opened your eyes and treated her with the love and respect she deserved. If you had treated her like your girlfriend and not like a piece of disposable trash once you were done.

She was the girl who never asked for much from you, only a fraction of your time. She’s the girl who understood your other commitments took place over her and she gave you all the space you needed even though it killed her. She’s the girl who only wanted a simple text now and then when you were too busy to say that you loved her’ or ‘missed her’. She’s the girl who craved the attention you used to give her. The girl who accepted that she would never be a priority in your life but settled to get pieces of you as and when you’d give them.

Your girl should never have settled for as long as she did. She’s the girl who deserves to be someone’s number one priority, she’s the girl who deserves to be loved unconditionally just like she loved you. She deserves the world and you could have given her that. It was right in front of your face. She didn’t deserve to be left out in the cold all alone because you abandoned her so cruelly that she had no choice but to walk away. You broke her after she had just fixed herself.

This girl didn’t want to walk away, she gave you so many chances for you to understand what she was asking from you. It wasn’t a lot! She never asked you for half as much as she gave to you. This girl wanted to be needed, wanted and cared for. She was NEVER a dependent or ‘clingy’ girl—you confused your past relationships with one that was based purely on affection and love. You allowed your past to ruin the best thing that could have happened to you. This girl didn’t want to feel so alone when she was with you. This girl soon realized that your love was a lie, you couldn’t have loved her like she loved you because if you had, you would have done anything to keep her.

The girl who trusted you, the girl who you once kissed on the forehead and held in your arms.

THAT GIRL WAS ME.

It’s only in time that you will understand the pain and the hurt you have put this girl through. She never deserved that, not once did she ever cause you so much heartache.

When you wake up alone craving everything you once had and didn’t fight for, only then will you want, miss and need this girl who begged you not to hurt her. You will then feel everything that she felt and more—you will have one of the biggest mistakes you have ever made haunting you. You will regret letting her go. Go have all the one-night stands you want, go do all the things in your schedule that you wouldn’t ‘fit’ her into… You will one day wake up and realize what you had but she is now gone.

What you should have known is this and she told you enough… She is a woman who knows her worth, she’s a woman who would never put up with the same shit for too long. She’s a woman who had to make one of the hardest decisions in her life and that was to leave the man she loved behind, as he was slowly killing her.

This diamond will eventually find the man who would do ANYTHING for her, the king to her queen. The MAN who would die for her and not use her as a shield.

You’re the guy who everyone calls an ‘idiot’ because of your actions.

You will soon find that she’s the girl you will be searching for in every other person but I will tell you now, you will never find her. Why? Because she was already standing by your side but you lost her while you were too busy ignoring her existence.

You were the other part of me, now you’re the guy I used to know.

From the girl who will never look back. 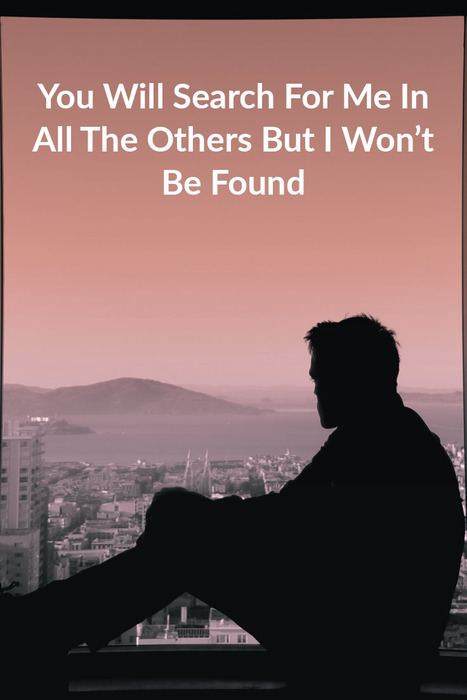 You Will Look For Me In Every Woman, But I Promise You'll Never Find Me

[…] You will look for me, but you’ll never find me. You will reach for me, but there will be nothing to grab onto. […]

I Know You Are Still Searching For Me In Every Woman