What does it mean when a Capricorn man kisses you? How does he do it? How important is it to him?

I know questions like this torture you. A kiss should make things clear, right?

Yet you’re here because, despite the intimacy, you still don’t know where exactly you stand with him.

Well, okay, I will give you a sneak peek: A Capricorn man kissing you is a VERY good sign. If you want to know what I mean by this, stay with me, and we’ll explore it together.

When A Capricorn Man Kisses You: 9 Hidden Meanings 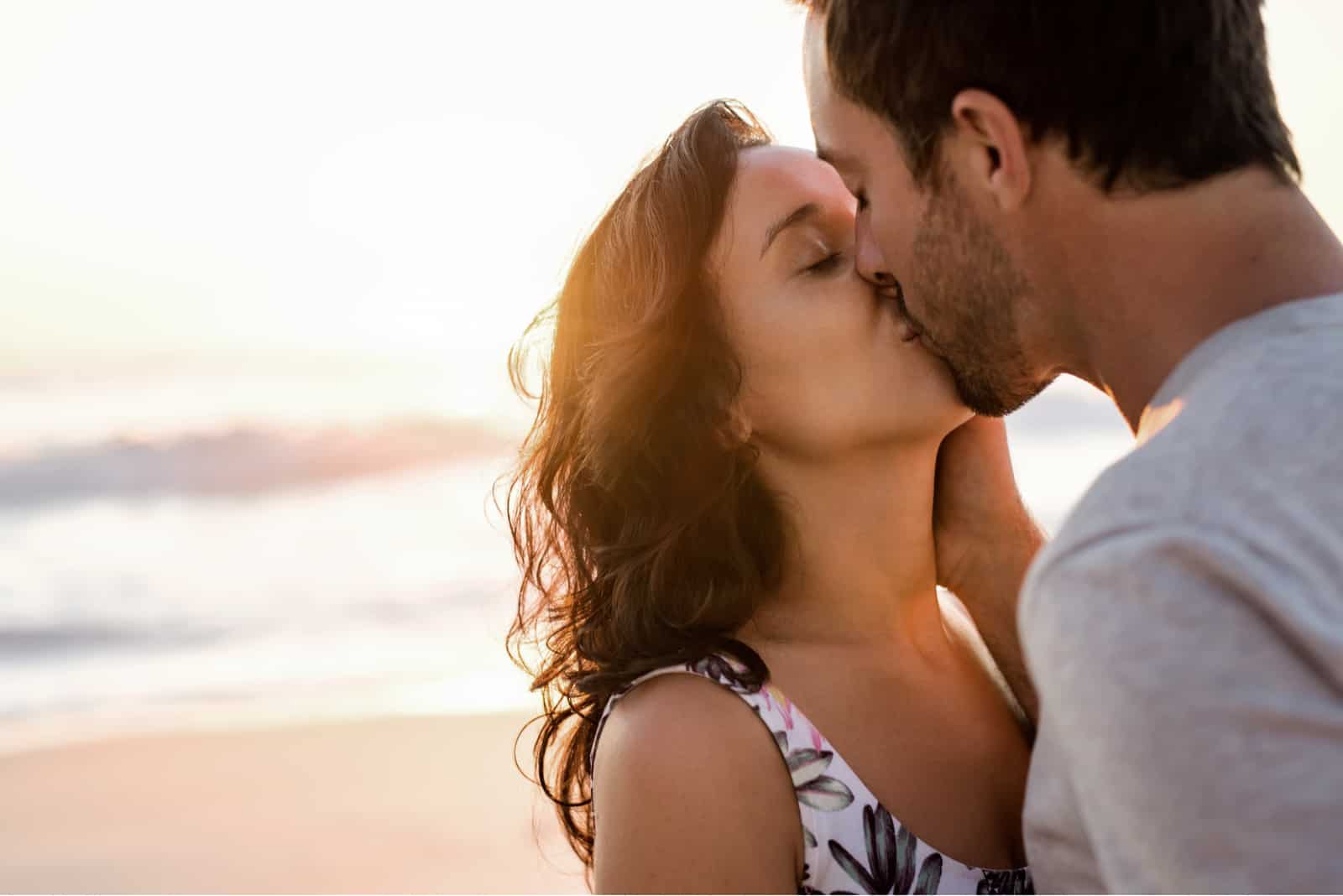 If your Cappy man has kissed you and you’re not quite sure what it all means, take a look at the following explanations:

When a Capricorn man kisses you, especially for the first time, his goal is to please you.

So, if you’re anxious, you have nothing to worry about because he’ll do everything in his power to make you feel comfortable.

As much as he wants to enjoy the kiss himself, YOUR emotions are his priority. That’s why he’ll probably ask you about your preferences.

He will do his best to make you happy, even if that means depriving himself of a specific kissing style for your sake.

Capricorn men aren’t very open about how they feel. Your guy could love you with all his heart but still be unable to express it.

So, what does he do? He decides to communicate his love for you through kissing.

If you have doubts, just pay attention to how you feel when a Capricorn man kisses you.

Are you ecstatic? Does everything around you cease to exist?

If so, that’s one of the telltale signs a Capricorn man has feelings for you. A kiss means much more than just your lips touching. It’s a declaration of love.

How romantic, isn’t it?

Being earth signs, Capricorn men are very sensual creatures. Your guy’s kiss will feel much more special than a regular one.

He will probably touch your waist, kiss and massage your neck, or stroke your hair. He will watch your reactions, and if he sees that you’re enjoying it, he will be happy to continue.

His touch will be soft and gentle, and you will be overwhelmed by the love he gives you.

Having many erogenous zones, your Capricorn partner will be overly excited at the slightest touch, too.

If he kisses you this way, imagine how exciting a Capricorn man in bed must be!

4. Playing hard to get won’t get you anywhere.

His zodiac sign may be a confident and driven workaholic in other areas of his life, but a Capricorn male is often reserved when it comes to his love life.

He’s the type that will admire you from a distance and won’t approach you until he’s sure that you reciprocate his feelings.

That’s why you need to give him clear signs of your affection, or even better, approach him yourself. If you’re too scared to do it in person, reach out to him on social media.

After all, what’s more attractive than a dominant woman? Nothing, I’d say.

Don’t be afraid to let him know how you feel because once you do, things will start going smoothly, and you will get your perfect kiss.

However, don’t be too pushy because that’s a MAJOR turn-off for him. Be flirtatious and direct yet subtle, and you will seduce him. 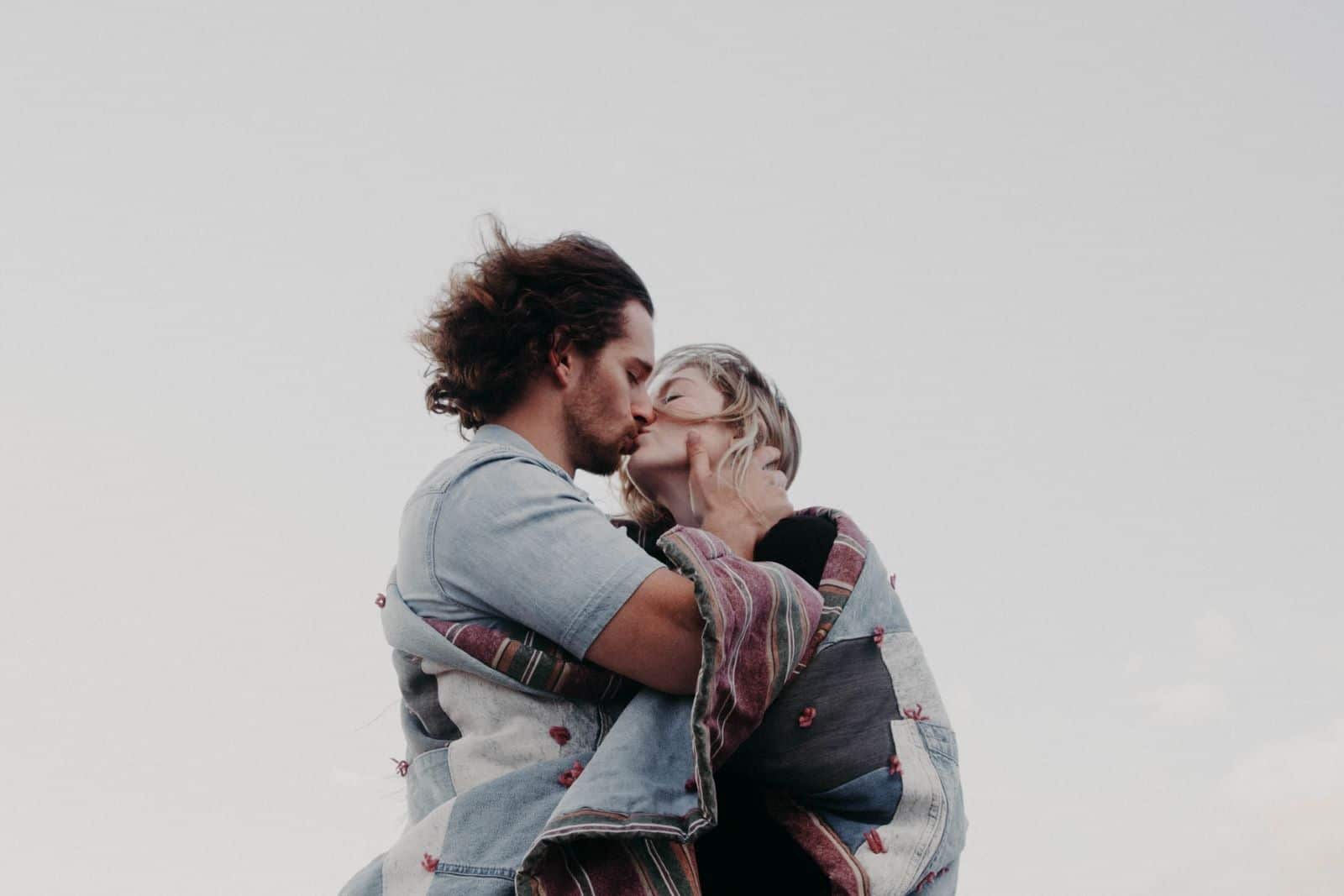 If a Capricorn man decides to kiss you, you can be sure of one thing: he is deadly serious about you.

He would never kiss a woman unless he could see himself being in a committed relationship with her.

To him, a kiss is much more than just a physical act. Instead, it rather means: ”Hey, I really like you, and I’m ready to take this to the next level.”

So, trust me, if he goes in for a kiss, you no longer have to worry about the nature of your relationship because what you have right there is a Capricorn man in love… with YOU!

6. There’s no audience to applaud your love.

If you expect a Capricorn guy to give you a kiss in front of a large audience like you see in Hollywood movies, you are gravely mistaken.

But, that’s not because he doesn’t love you. What a Capricorn man likes is a more quiet place where he can be intimate with you in how he really wants to be.

He’s just not comfortable with other people watching him kiss you. He feels that such a sacred display of affection is reserved for nobody but the two of you.

So, if he refuses to kiss you in public, don’t be mad. That’s his boundary, not a sign that he doesn’t care about you.

7. He enjoys being the dominant one.

Men under the Capricorn sun sign always want to be in charge. They are such perfectionists that they won’t rest until everything’s how they imagined it would be… or, rather, how YOU imagined it.

Yes, as we’ve mentioned, when a Capricorn man kisses you, he wants to make you feel comfortable. That’s why he’s the one to lead the way.

His goal isn’t to dominate you but rather to give you the perfect kiss.

Of course, if you’d like to be the dominant one sometimes, you should tell him. Just don’t be angry over this trait of his because he only wants to make you happy.

8. It isn’t a decision made lightly.

Trust me, when a Capricorn man kisses you, that means you’re very special in his eyes.

He never goes around kissing only for the sake of kissing. They test women before taking any further steps.

If he chooses to do it with you, it’s because he genuinely likes you. He is extremely picky and won’t easily go in for a smooch unless he views it as something much deeper.

You probably feel flattered right now. A guy who rarely kisses anyone decided to kiss YOU?

I mean, of course, you deserve to be kissed either way, but it sure is nice as hell for someone to pick you in the midst of so many other people.

9. It’s about keeping an open mind.

A Cappy man never sticks to one kissing technique. His main personality trait is that he’s always open to learning new stuff because he knows he can’t please his woman without an open mind.

So, if you like to be kissed a certain way, don’t shy away from telling him about it. Nothing is ‘too basic’ or ‘too extreme’ for him.

Whatever it is, he will be more than happy to practice it with you.

He only cares about how YOU will feel. If you’re satisfied with the kiss, then he is, too.

When A Capricorn Man Kisses You: Kissing Compatibility 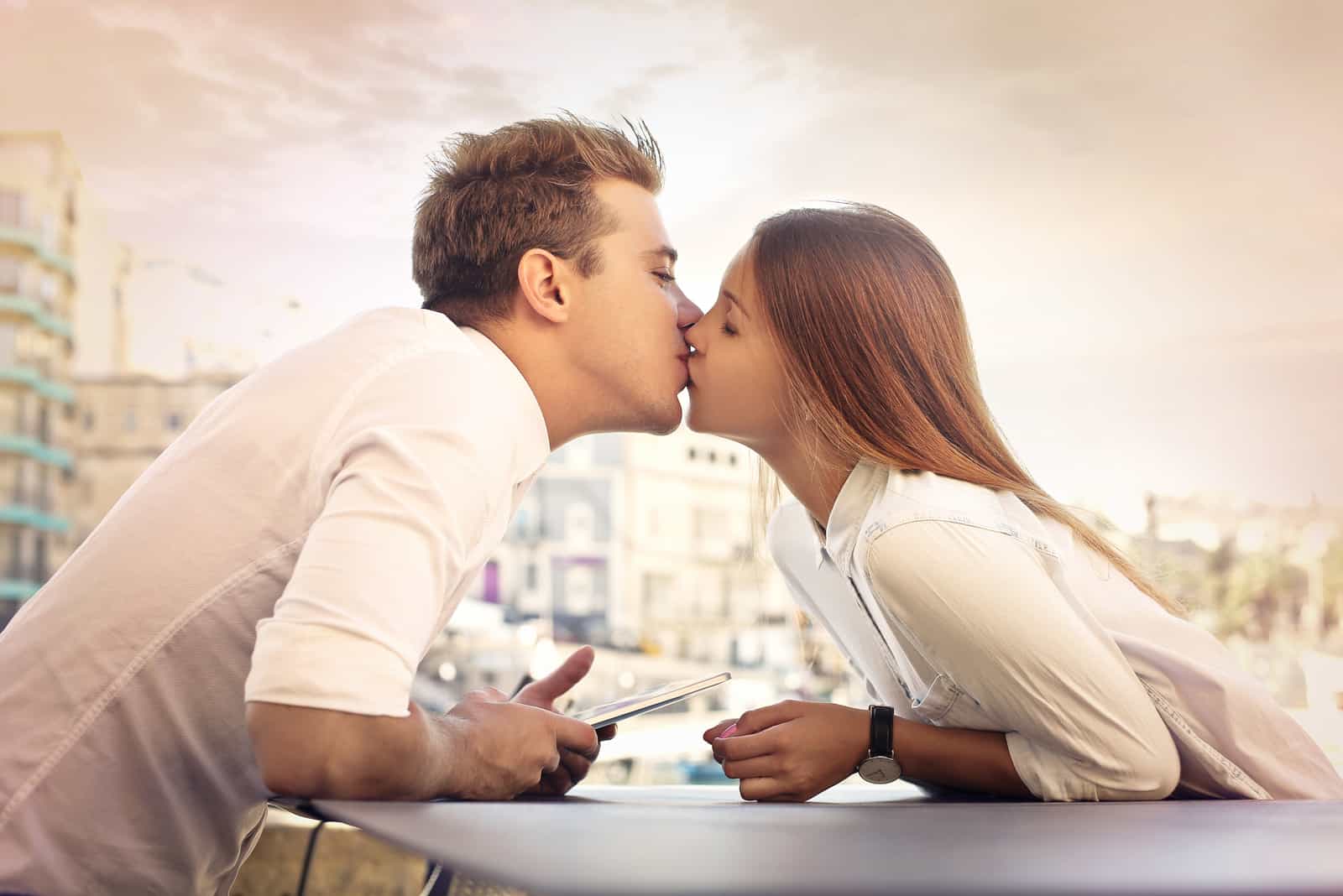 Every zodiac sign wants a different type of kiss. Capricorn women and men both like sensual kisses, but as we’ve seen, they will ALWAYS put their partner first.

If they are involved with a Pisces or Scorpio, they will go for a gentle kiss. On the other hand, Taurus and Virgo may want to get a little more extreme.

Some signs, such as Aries, Gemini, Leo, Sagittarius, and Aquarius, prefer a little playfulness before the real thing comes on.

But, that won’t be a problem because a Capricorn’s great sense of humor will easily create the atmosphere for the perfect kiss.

And, finally, two signs that go perfectly with the Capricorn: Aries and Libra. They prefer a sensual type of kiss, too, so together, they make their perfect fantasies real. 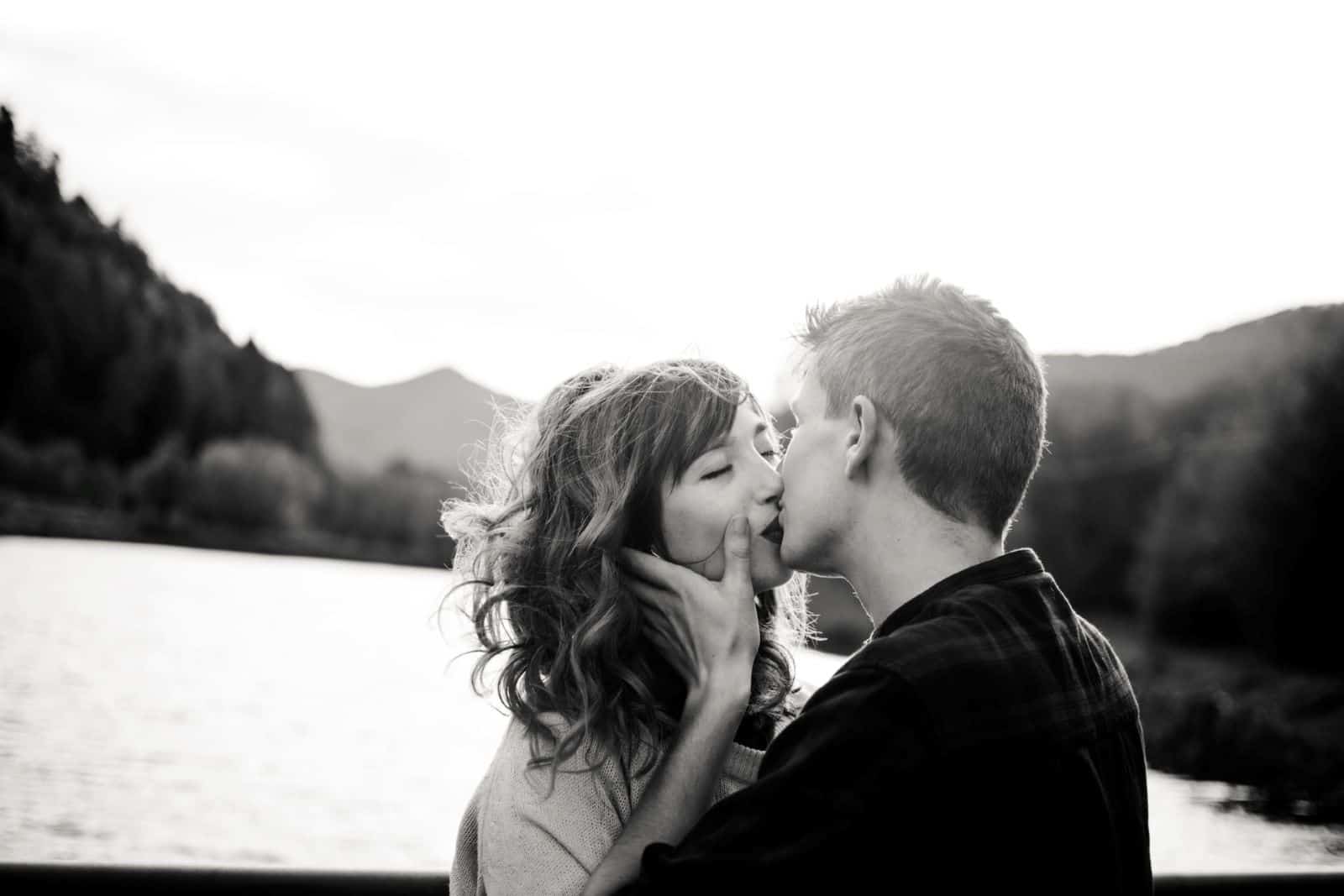 Yes, but it’s more about kissing the right person.

It may be enjoyable, but a Capricorn man will rarely take that step if he doesn’t have feelings for you. To him, the most important thing is compatibility.

So, if he decides to make the first move and give you an intimate kiss, know that the deal is sealed.

You aren’t just a fling to him because Capricorn men won’t go through all the trouble unless they want a serious relationship.

It will probably take him an eternity to finally kiss you, though.

Still, don’t confuse that with a Capricorn man ignoring you because zodiac signs ruled by Saturn tend to take things slowly.

But, when it finally happens, it will be heaven on earth for both of you! 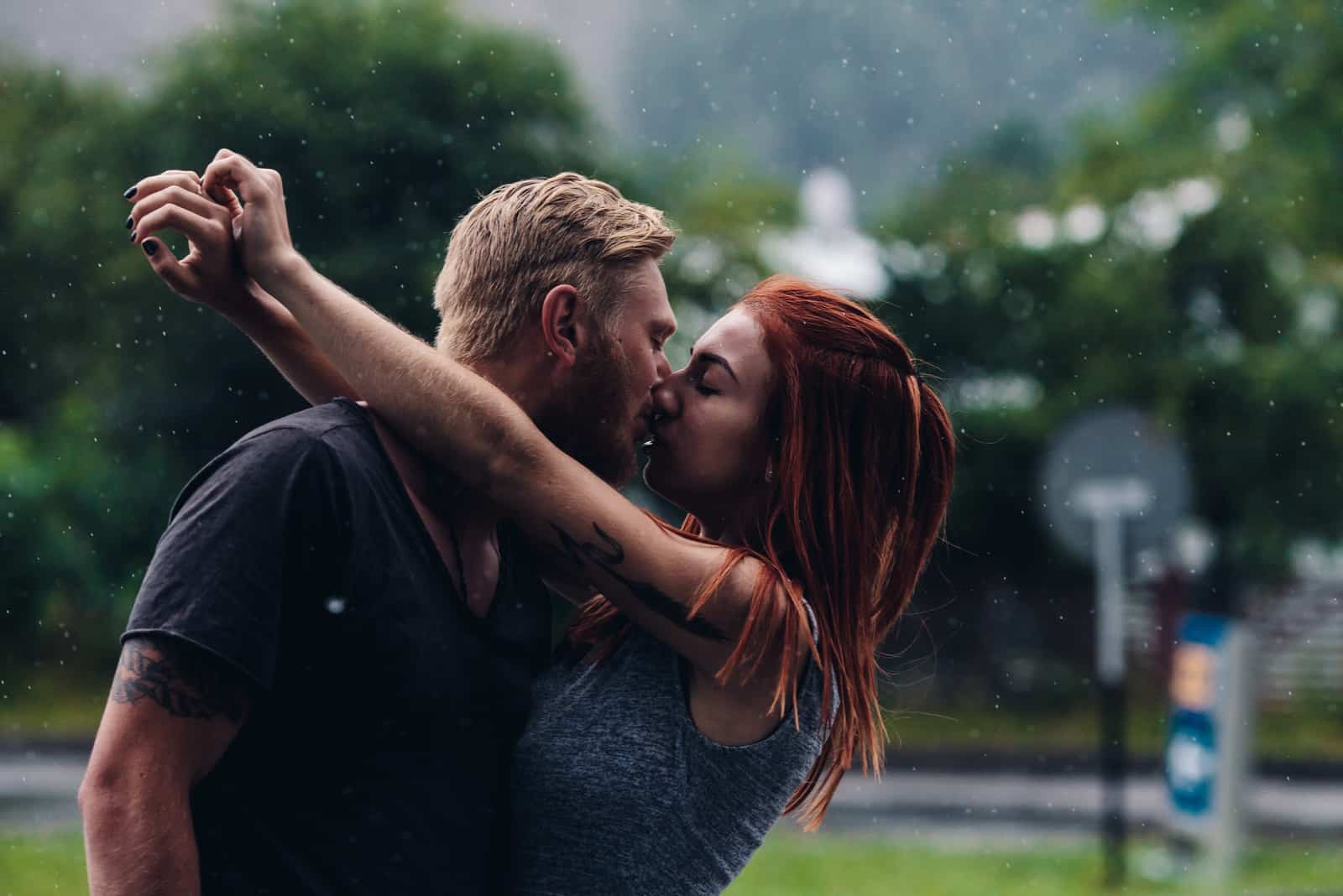 Have we finally cleared any doubts? Have you realized that when a Capricorn man kisses you, it’s a pretty big deal?

This horoscope sign may be a great kisser, but he definitely doesn’t give away his kisses THAT easily.

So, if you reach that stage, rest assured that his eyes don’t see anyone else but you.

Remember to communicate with him openly about what you like. Let him take charge, but don’t neglect your wishes either. Balance is always key. 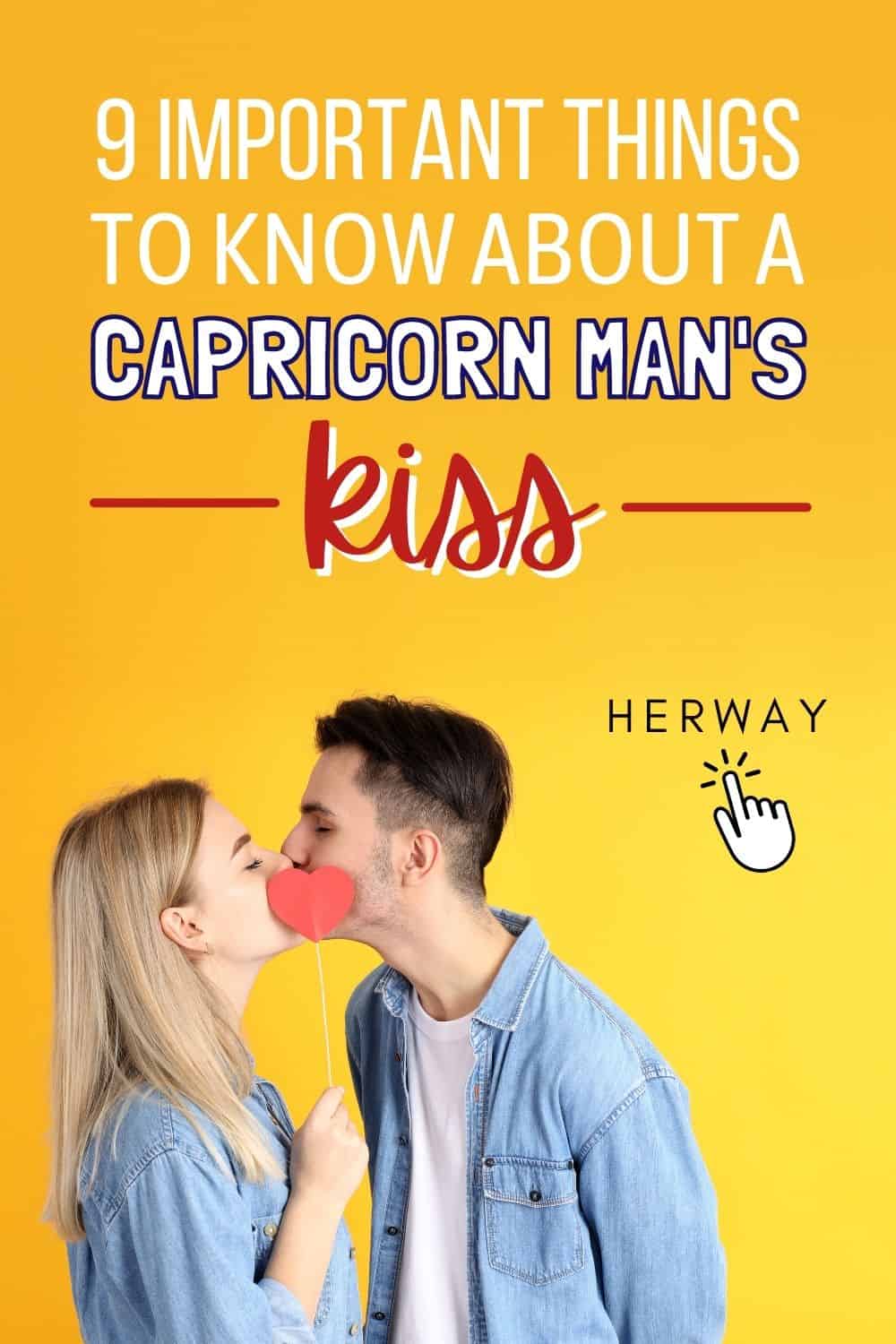