Have you ever wished upon a star? These wishes are what this major arcana tarot card is all about. The Star tarot meaning is a sign of a wish granted and a beacon of hope.

When the Star tarot card appears, it’s time to look within yourself for the answers to your problems, stop running away from them, and find the solutions you need.

The Star tarot card represents faith in yourself and life itself, which is what makes it so powerful.

I am here to help you decipher the upright meaning of this card, together with its keywords and depictions. All of this so you can better understand what your tarot deck is trying to tell you. 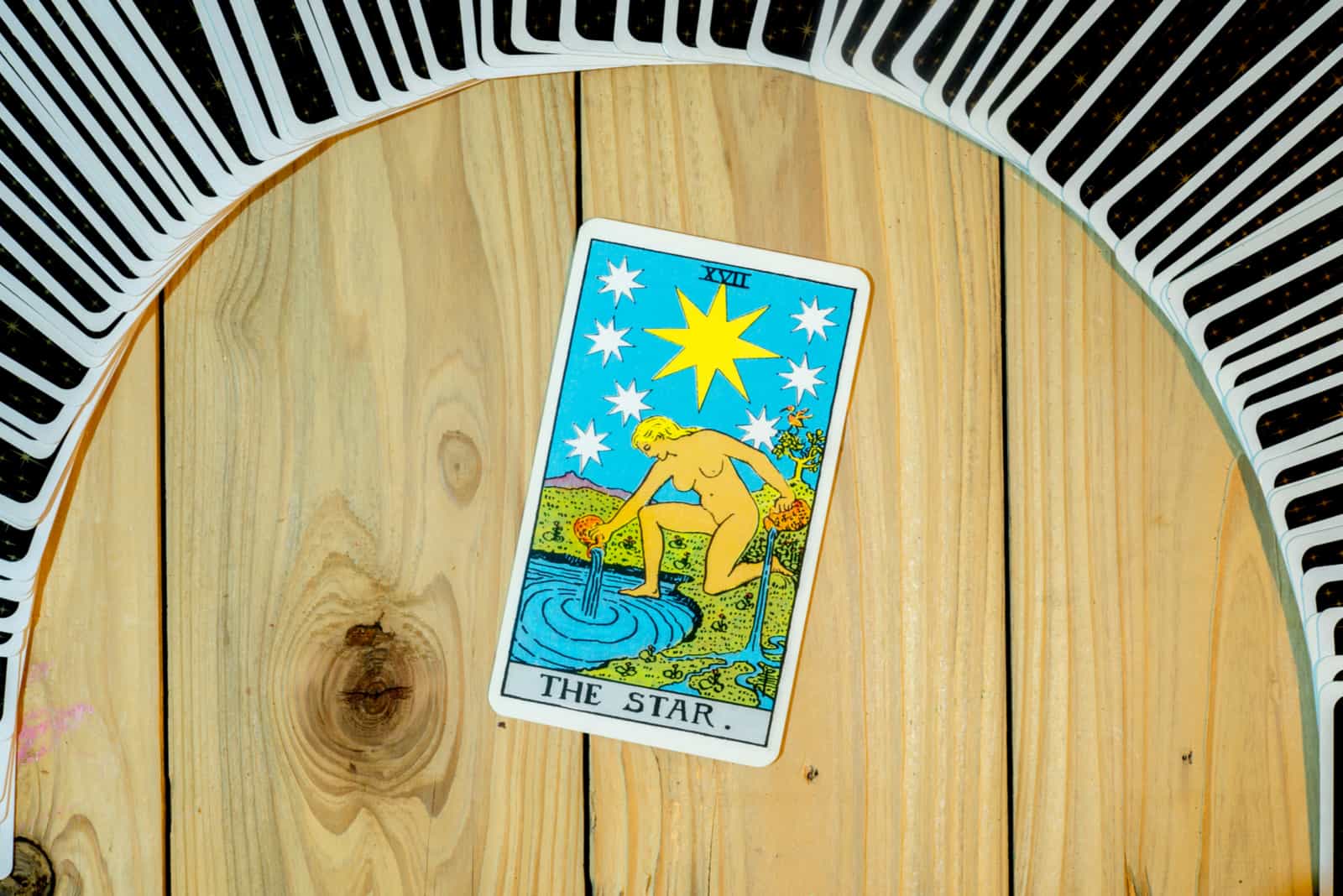 The meaning of the Star tarot card is simple. This right here is one of the most positive cards in the tarot deck. This card signifies that there are many possibilities for the future, and everything will work out as long as you maintain hope. The Star is a guide to show you the way to find your new destiny.

The Star tarot card has a lot of different meanings depending on the context in which it appears. The upright Star is often associated with hope, inspiration, and success. It also represents beginnings, freshness, starts, and endings.

The Star meaning on the card can represent the sun or the moon. This can be interpreted as a sign of new opportunities that will create temperance and better outcomes for you.

The Star card isn’t always only about the future. The reversed Star can also represent something from your past that you need to let go of so you can move forward in life.

The reversed meaning of the Star can also remind you to explore new horizons and look towards the future with excitement and anticipation and not with a lack of faith. If you’re feeling stuck in your life, it’s a sign that something good is coming your way.

The Star major arcana tarot card can be interpreted in different ways, and here are some upright keywords: 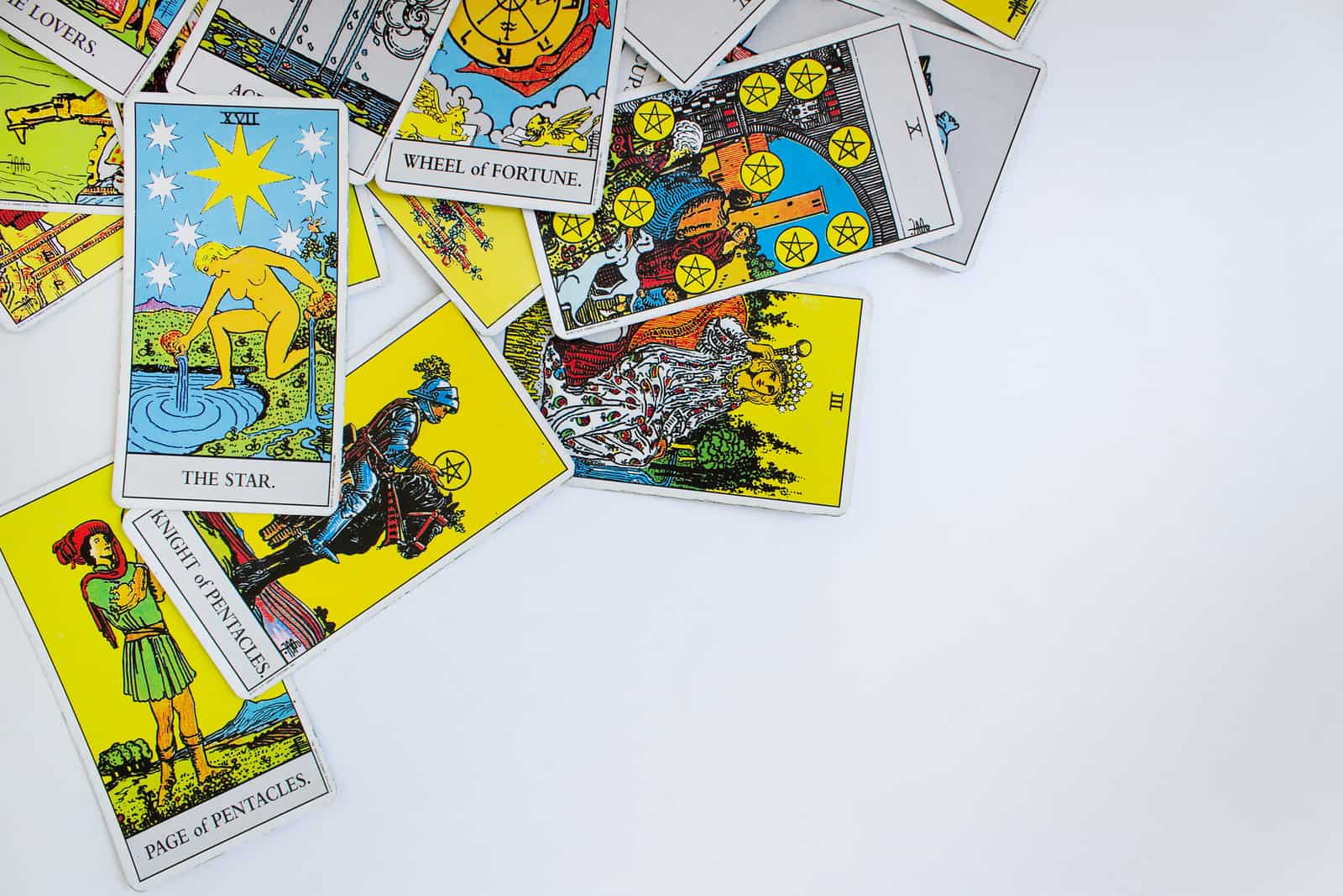 The Star tarot card is a symbol of hope and renewal. This can be seen through the imagery of the Rider-Waite tarot deck, which features a naked woman kneeling on a riverbank with her arms outstretched.

She is there to receive seven smaller stars that have fallen from the sky and from the large star. These stars represent her wishes.

She is surrounded by a body of water and a field of crops. The naked woman is using containers of water to water the dry land. This represents growth and self-care.

This card is also linked to other major arcana cards like the Chariot, the Fool, the World, the Wheel of fortune, and the Tower card. They all hold different tarot meanings.

In numerology, this card shows the tarot card number 17, but it is also tied to the lucky number 7. In line with its zodiac sign, Aquarius is the horoscope sign most people tie the Star to. 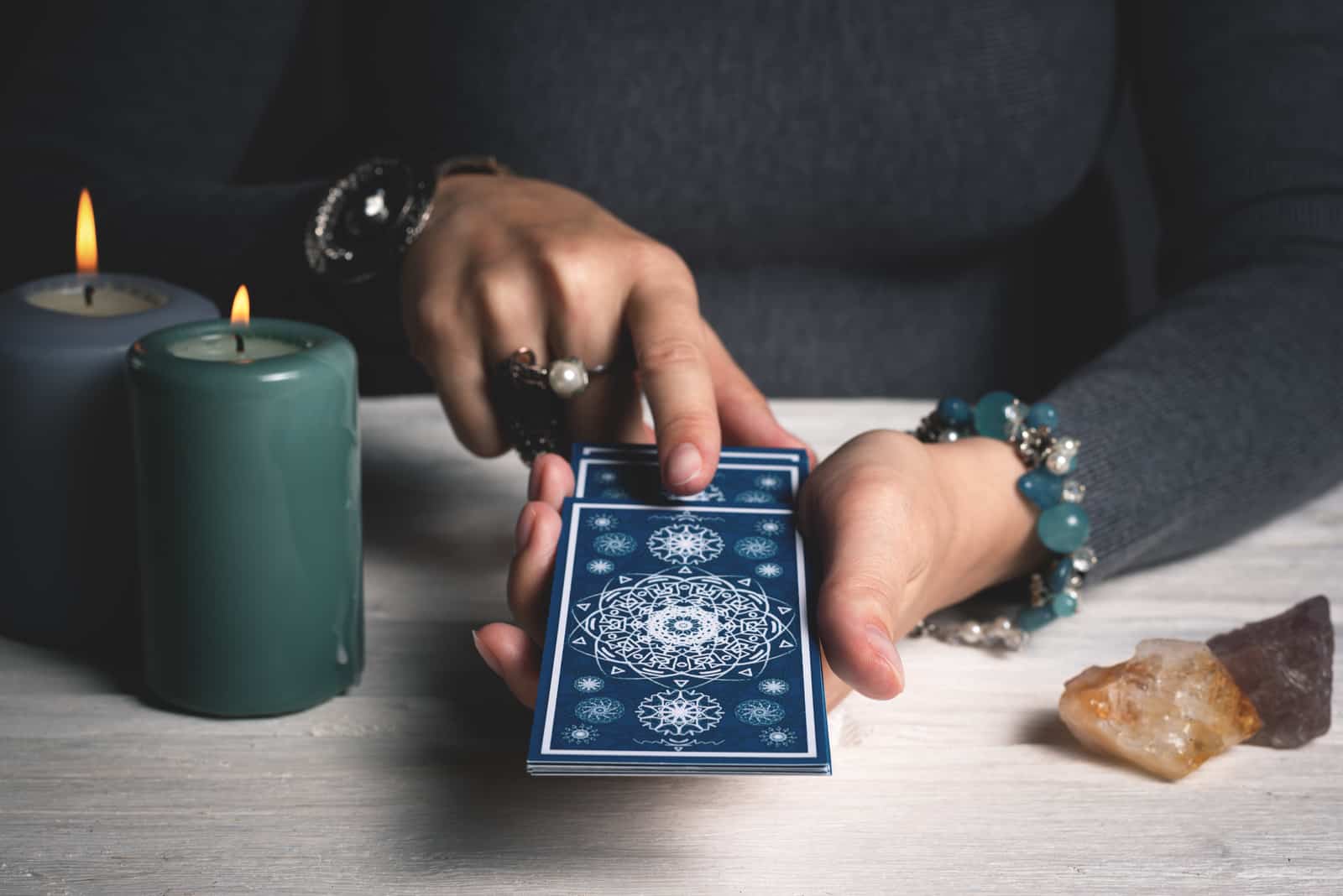 What does the Star tarot card mean? Here are some examples:

The Star tarot card meaning is often associated with the idea of hope. It can be seen as a sign of good luck and that hope that is yet to come.

The Star tarot card is often seen as a sign of new beginnings. So, don’t feel discouraged because hope and unwavering faith are sometimes all you have.

The Star is a card that is often associated with the idea of inspiration. It can be seen as a sign that you need some creative fuel in your life and that you should continue to pursue your goals.

This is why we need creativity to strive both in relationships and our professional lives. Try creative ways to be romantic, or look for creative hobbies like painting.

The Star major arcana card is about hope, and what is life without hope? Life is about new beginnings and fresh starts.

The Star tarot card promises us that there will be light at the end of the tunnel. It can be foreshadowing new life, like a baby, pet, or other forms of life. Your tarot deck might be telling you to find out what life means to you, live life to the fullest, or focus on your private life.

Maybe the Star is telling you to try healing yourself. This is because the Star tarot meaning is also about healing.

The naked woman on the card is not just there to water the field. She is there to let it heal and thrive.

The same goes for you. You can’t just chug down food and expect your body to function. You need to take care of it and heal any wounds.

One of the Star card meanings is growth. It is about the future and what it holds for you. It’s a card of hope and new beginnings, which means that opportunities ahead of you will help you achieve personal development and growth.

This is why your card might be telling you that you need to align your chakras, radiate feminine energy, and start a growth mindset.

The Star tarot card might be foreshadowing a period of transition for you. It might be telling you it is about time to transition from lovers to friends and that you should be open to new possibilities and opportunities that may come your way.

It’s time to forget the past. Your future needs you. On the other hand, your past doesn’t. This is why you need to leave them in the past and carry on with your life.

The Star card is about change and transition. It tells you you should let go of the past and what happened to you and focus on the life you have right now.

Someone who’s ill could pull the Star upright from their tarot deck. The Star is a card that is often associated with the idea of healing.

This is why this card can be about the process of getting better after physical or mental illness. In any case, I hope all ill women and men get better soon.

The Star is a tarot card signifying hope and optimism. It is a card that focuses on the fulfillment of wishes and desires. The Star tarot meaning can be interpreted as a sign that your wish will come true.

Don’t worry. God will answer your prayers, and remember that even if He doesn’t, it might be because he is saving you from something.

It’s time to jump! The Star tarot card is telling you that it is time to trust your instincts. Therefore, trust that God will send you the right person at the right time and set some spiritual goals you can strive towards.

The Star tarot card is often associated with hope and optimism. It can also be seen as a sign of guidance and direction. The card tells you it’s time to take a leap of faith into the unknown.

Does The Star Tarot Card Mean Yes Or No? 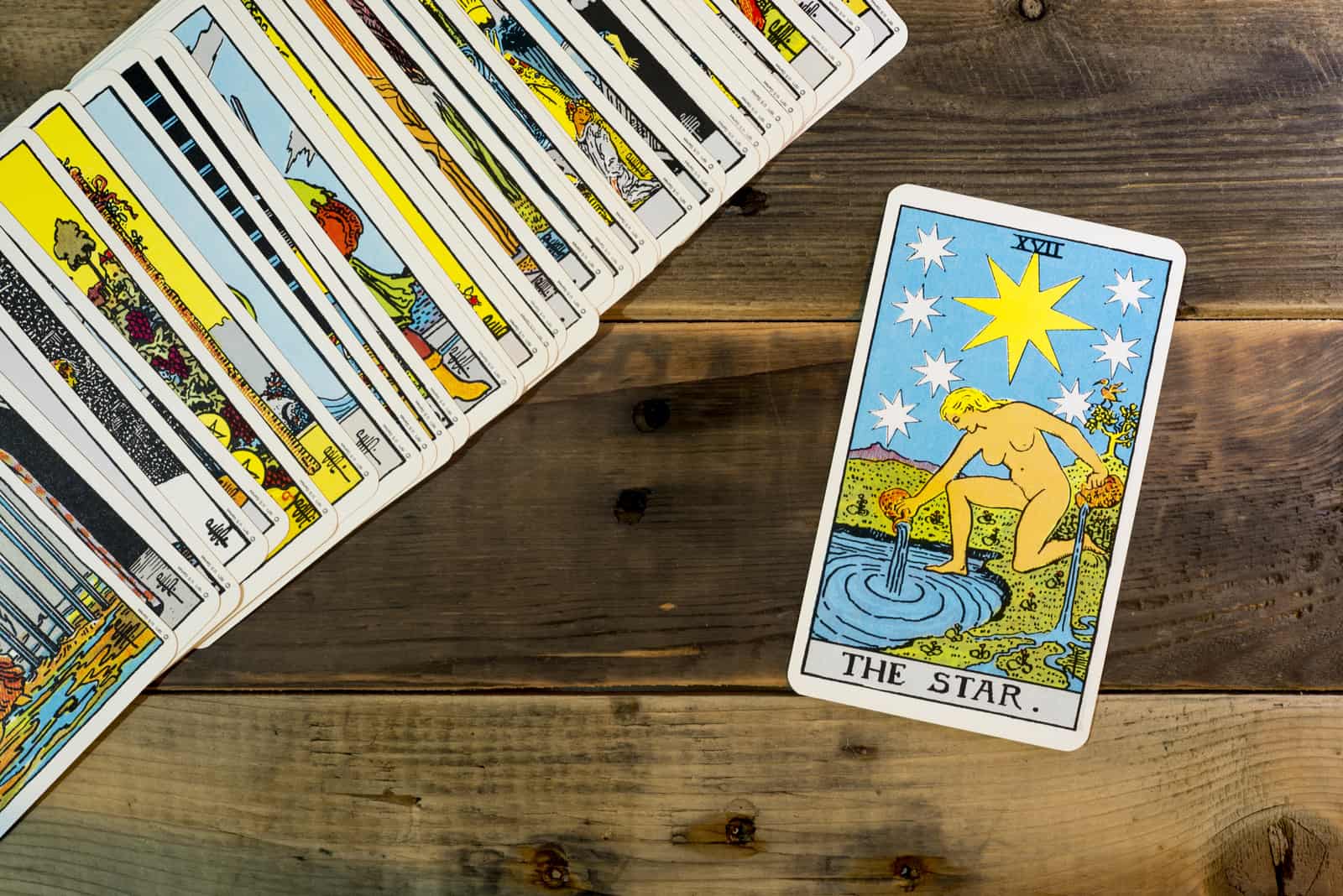 The Star tarot card is a card of hope, new beginnings, and good fortune. The card suggests that a period of frustration and difficulty is ending and that the situation will soon improve.

In a tarot reading where the oracle question needs a yes or no answer, when the Star appears, it means a positive answer. Therefore, I would say it’s a yes.

The Star tarot card indicates that you are on the right path and should keep going. It also means that your dreams are coming true. 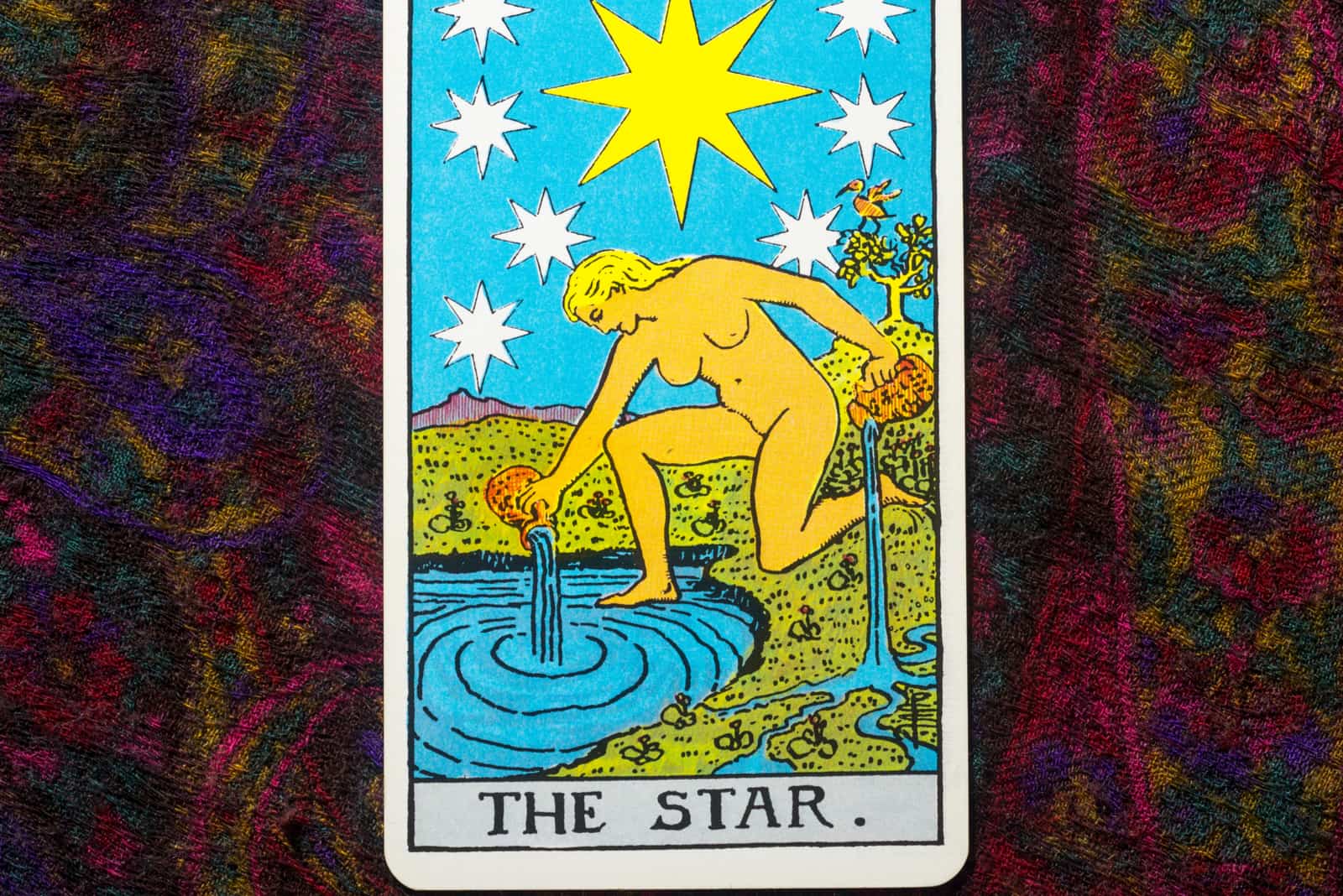 A deck of tarot cards is a powerful tool for divination, meditation, and creativity. We can use the cards to answer questions, explore different perspectives, and generate new ideas.

They are often used to reflect on the past or predict the future. Each card has a meaning that is interpreted by the reader in line with their oracle question and tarot card reading skills.

In any case, the Star is a glimmer of hope. Even though it might seem far away, it is a sign that hope, faith, and trust in the Universe persist. Remember, you will succeed in all of life’s challenges if you work hard enough.

I hope this article has helped you in understanding what the tarot deck is trying to tell you and how to interpret the Star tarot meaning.