I want to be clear on this from the very beginning because most people have a totally wrong idea about this: emotional maturity doesn’t come with age!

So, if you’re wondering if you’re dealing with an emotionally immature man, you probably have every right to do so. However, you should check out these 7 deadly signs of an immature man just to make sure you’re right before making any moves.

If your partner shows any of these signs of emotional immaturity, you should consider breaking up with him. Yes, relationships are hard work, and you can’t give up the first time you run into an obstacle; however, there is also no point in trying to save something or someone who doesn’t feel the need to be saved.

At the end of the day, your happiness and peace of mind should always be your priority. If someone is affecting it in a bad way, you should find a way to cut them out of your life.

Contents show
1 7 Deadly Signs Of An Immature Man
1.1 1. Peter Pan syndrome
1.2 2. Lack of responsibility
1.3 3. Commitment issues
1.4 4. Behavioral patterns of a narcissist
1.5 5. Dependency issues
1.6 6. Temper tantrums
1.7 7. Not being able to maintain any kind of healthy relationship
2 What Causes A Lack Of Maturity?
3 How Does A Mature Man Behave?
4 At What Age Do Men Emotionally Mature?
5 To Wrap It Up

7 Deadly Signs Of An Immature Man 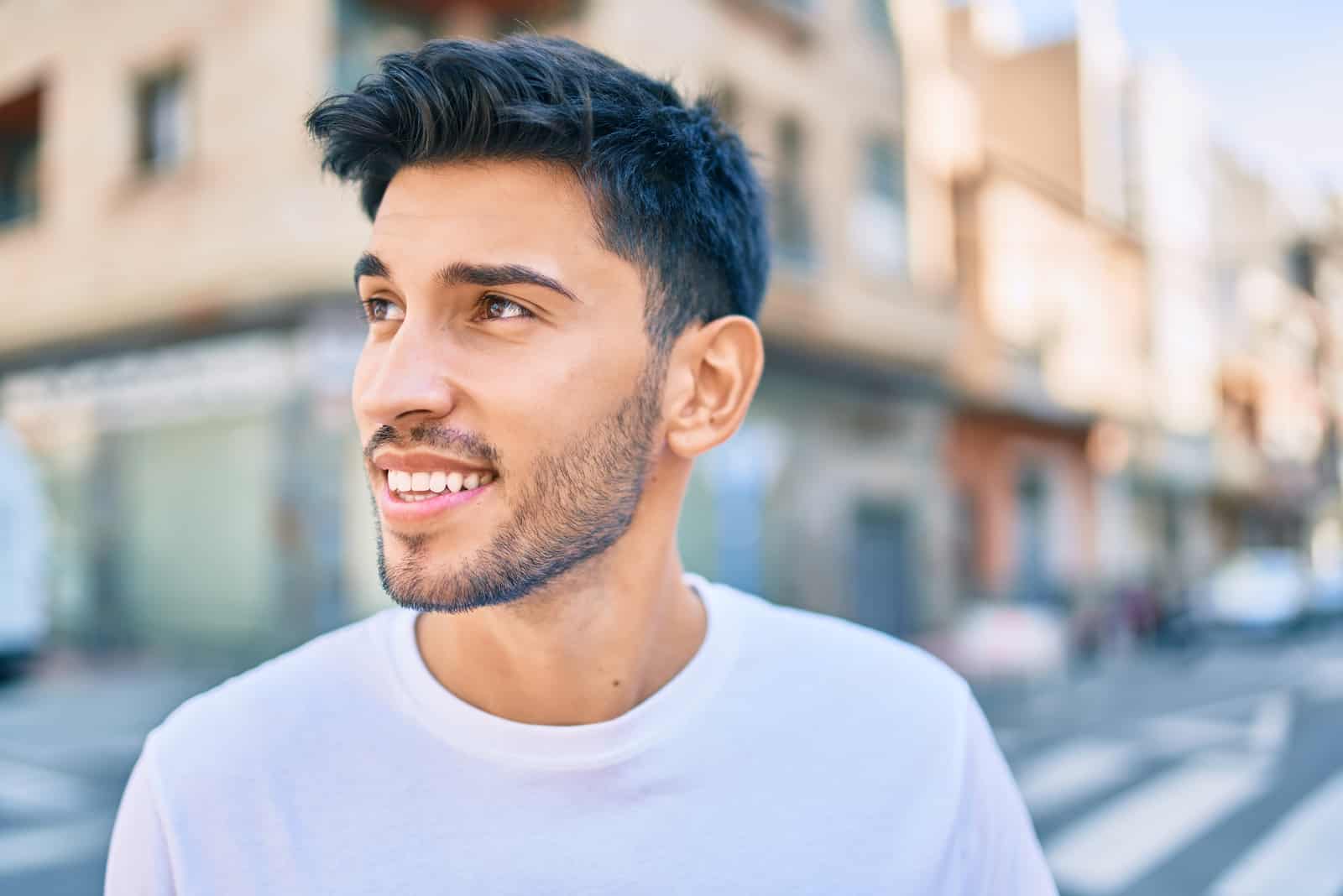 Here are the most common red flags of emotionally immature guys. If you recognize any of them, wave your man goodbye and leave him behind.

If your man displays childish behavior and clearly shows that he doesn’t have the intention to grow up, it means he has Peter Pan syndrome.

The psychotherapist Marni Feuerman LCSW LMFT says, “If your partner is Peter Pan, you might be Wendy. At first, his behavior might have been fun and entertaining. Perhaps you were drawn to him because you felt that he was a ‘challenge’ or someone that you could ‘fix’ or change.”

There is a label for that, too, and it’s called Wendy syndrome. It’s when a woman feels obligated to take care of her immature man. She literally behaves like his mother and feels the need to help him grow up.

The truth is, it’s hard to admit to yourself that your behavior and your relationship are toxic. However, you need to know that the sooner you accept and admit it, the sooner you’ll be able to work on finding the solution to it all.

Another red flag that shows you don’t have a man by your side but a man-child is his irresponsible behavior. If he can’t stand behind his words and his actions, if he can’t take responsibility for his deeds, that means he is emotionally immature.

He’ll never accept and admit his mistakes because he’ll always blame others for them. If you leave him no option but to admit his wrongdoings, he’ll try to make up an excuse to justify his actions.

You can never expect an apology from this kind of guy because you’ll never get it. In his eyes, he doesn’t make mistakes, and he feels he has no reason to apologize for anything.

The point is that having a healthy and serious conversation or discussion with him is impossible. And without it, without healthy communication, you’ll never be able to build a healthy relationship… It’s a fact.

Have you been dating for a while? Has he put a label on your relationship? Is he committed to you completely?

If he isn’t, and if he keeps avoiding a committed relationship, it’s obvious that he has commitment issues. And unfortunately, those issues are the most obvious sign of emotional immaturity.

He doesn’t allow you to get too close and get to know him on a deeper level because he’s afraid it may make him vulnerable. He knows it might strengthen your connection, and that is precisely the thing he’s trying to avoid.

4. Behavioral patterns of a narcissist 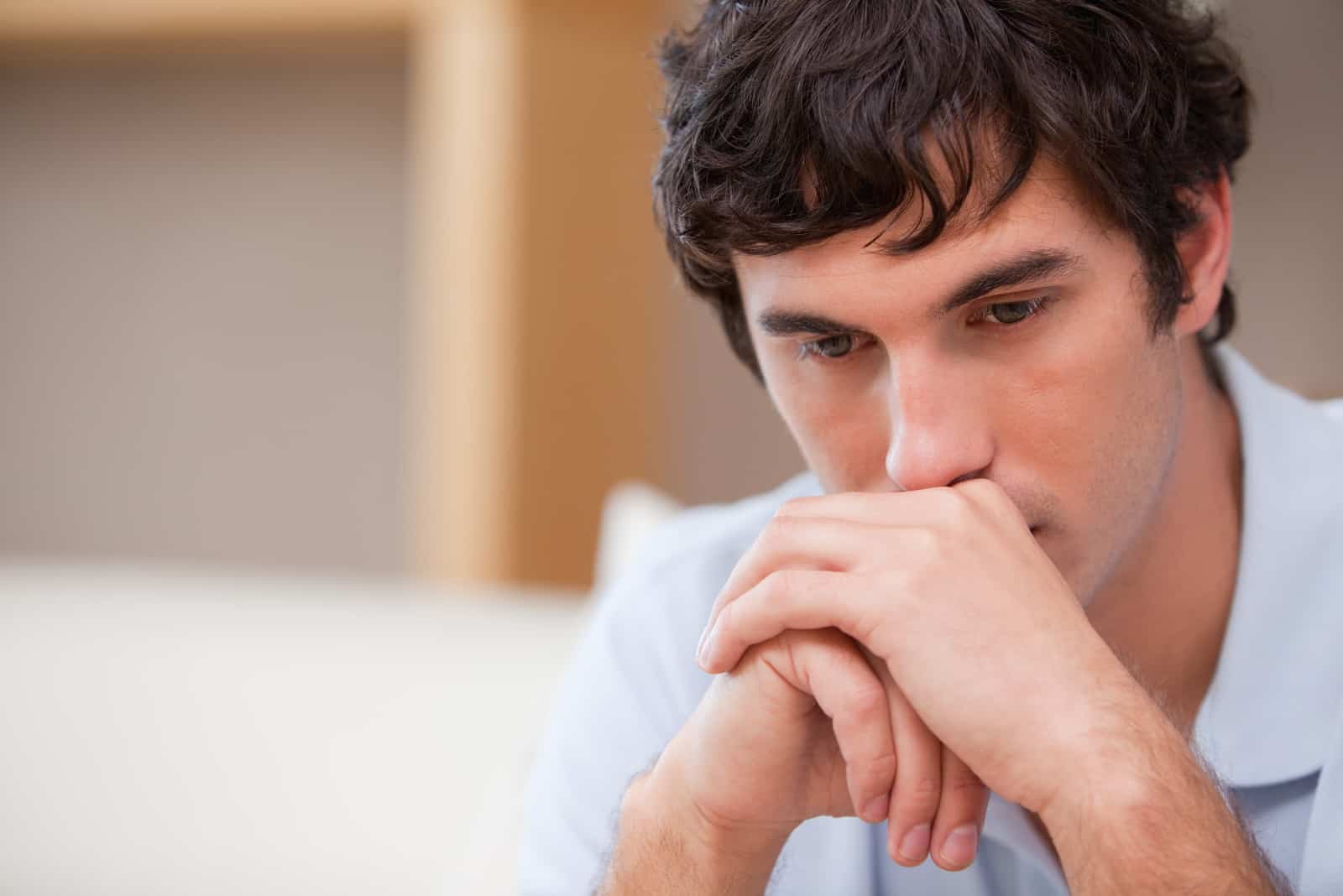 Have you ever noticed any traits of a narcissist in your man? It’s really the little things, for example, boasting, arrogant and self-centered behavior, selfishness, and the need to be the center of attention.

If you have, the fact is that your man probably has a narcissistic personality disorder. The truth is, sometimes, it is very difficult to distinguish narcissism from emotional immaturity.

However, if your man has these narcissistic traits along with these 6 signs of emotional immaturity, he’s definitely an immature person.

If you have noticed that he has unhealthy attachment and dependency issues with some of his family members, friends, or even co-workers, that may be another sign of emotional immaturity.

A grown-up man has healthy relationships with everyone around him. He doesn’t depend on those closest to him, and he never stays in codependent relationships.

If he distanced himself from his friends or family members when you started dating and focused all of his attention solely on you and your relationship, it’s clear that he has dependency issues.

In the beginning, you’ll enjoy all that attention and affection, but with time, it’ll start bothering you because you’ll feel trapped in your relationship. He’ll invade your personal space and break all of your boundaries, and very soon, you’ll start feeling suffocated.

You may think that it’s all because he is afraid of losing you, but the truth is, it’s only because of his unhealthy attachment style.

No matter how much you love him, you shouldn’t pretend like you’re okay with it all. Either find a way to make him understand his behavior and change or end your relationship ASAP.

If your man isn’t able to have a healthy discussion with you, if it always ends in him screaming, hitting, or breaking things, it’s a huge red flag he’s emotionally immature.

He isn’t able to deal with his emotions in the right way, and that’s why he can’t have a healthy, serious conversation with you. He lets those emotions out in the worst possible ways, and of course, most of your issues and problems don’t even end up being resolved and dealt with.

The unfortunate fact is that due to his temper tantrums, your relationship may also become abusive, and he might move from verbal to physical abuse. If you want to avoid that scenario, end your relationship now.

7. Not being able to maintain any kind of healthy relationship

This is the last and probably one of the most important signs of the 7 deadly signs of an immature man. If you’ve looked up his past and found out that he was never able to maintain any kind of healthy relationship, especially a romantic relationship, it’s definite… You’re dealing with an emotionally immature guy.

And no, don’t even think that you’ll be the one to change him and make him commit. If all those people and women before you didn’t succeed, you probably won’t either.

You’ll fail because he doesn’t even want to change. He likes his way of life, and he doesn’t see a problem with it.

You’ll only waste your time and fall in love with him deeper, making your pain bigger once you become aware that you don’t have a future with that man.

What Causes A Lack Of Maturity? 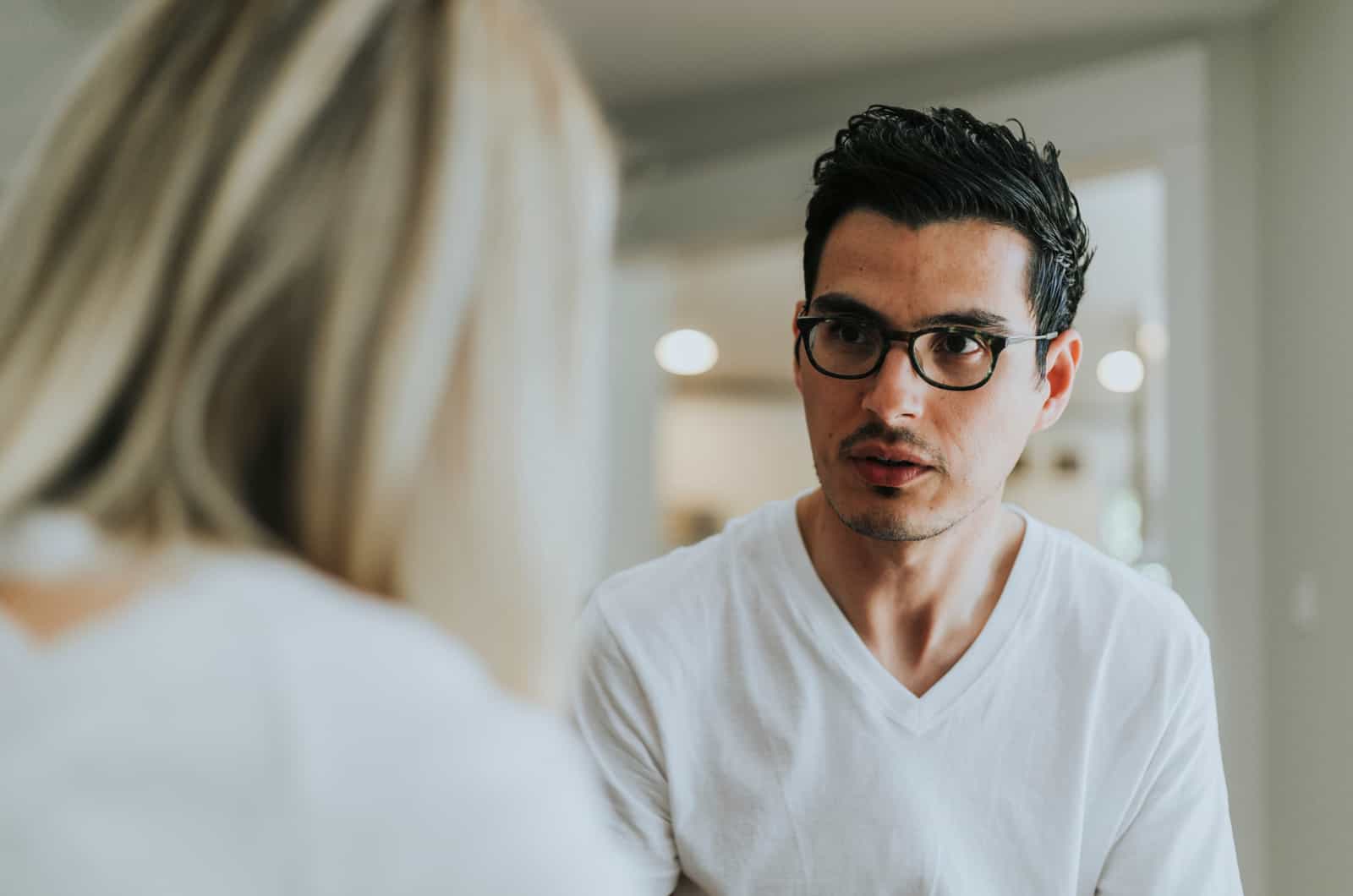 In my opinion, life circumstances are one of the biggest factors when it comes to emotional maturity and growth. If someone has had a hard time in life, especially in their love life, it’ll most definitely reflect in their emotional growth.

They’ll likely have commitment issues and self-esteem issues, which will result in a high level of immaturity.

Another factor is, of course, a person’s character and nature. Some people have childish personalities that don’t allow them to become emotionally mature.

Childhood traumas are also an important factor in emotional growth.

If someone was emotionally neglected as a child, they’ll probably lack emotional maturity when they grow up. If parents don’t teach their children how to be emotionally mature, it’ll be difficult for them to understand it themselves later on in their lives.

How Does A Mature Man Behave? 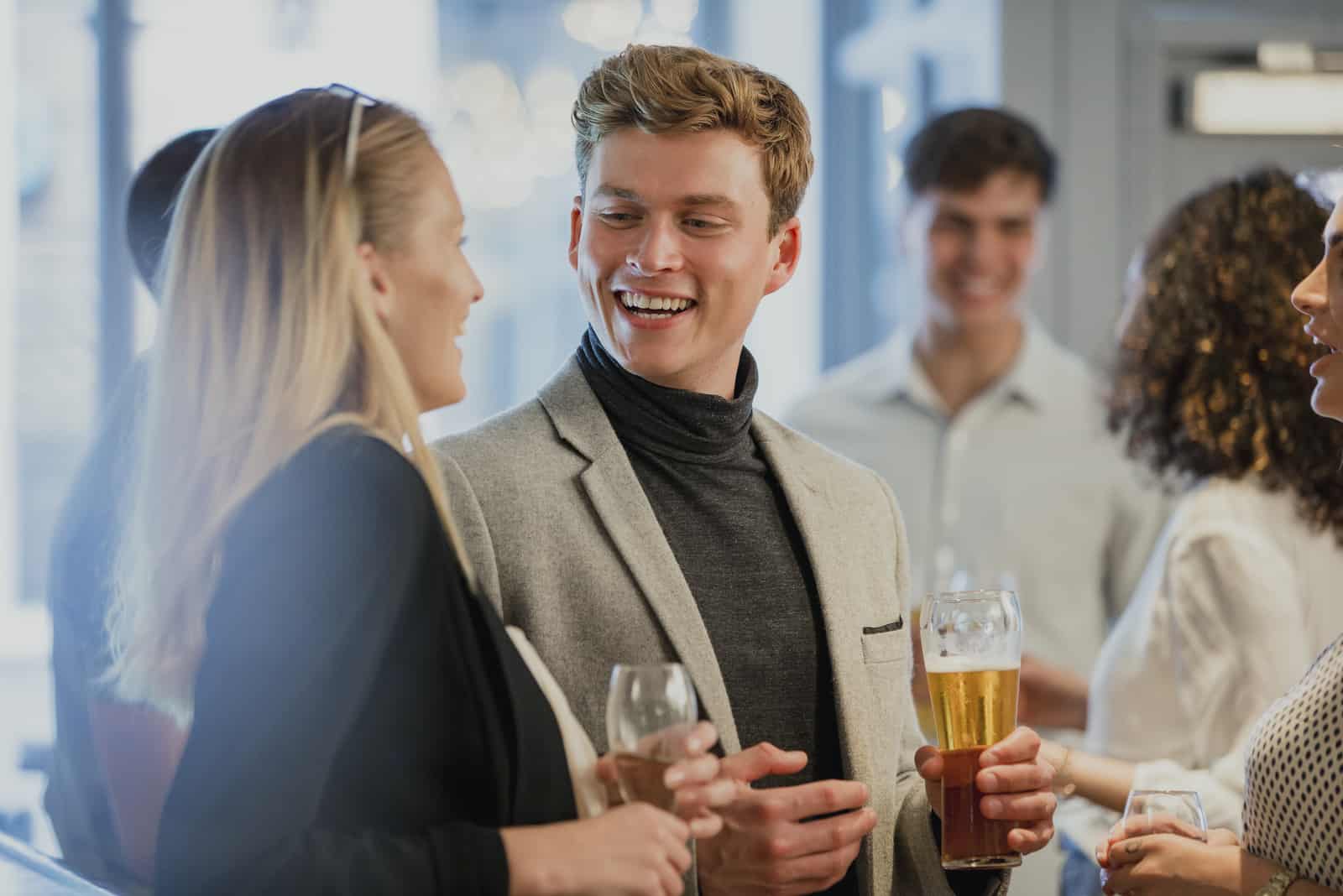 It’s really not difficult to recognize a man with a high maturity level. The first thing (and probably the most important) you’ll notice is that you can always have a serious conversation with them.

They don’t have commitment issues. If they like a woman, they’ll be direct about it and try hard to win her over.

Emotionally mature men always stand behind their words and never fail to keep their promises. It’s all because they know the importance of it and how breaking their word and promises can hurt someone they care about.

Mature people also pay a great deal of attention to their self-care, mental health, and self-esteem. They’re perfectly aware of their qualities and flaws, but they never allow their insecurities and imperfections to affect any aspect of their lives.

At What Age Do Men Emotionally Mature? 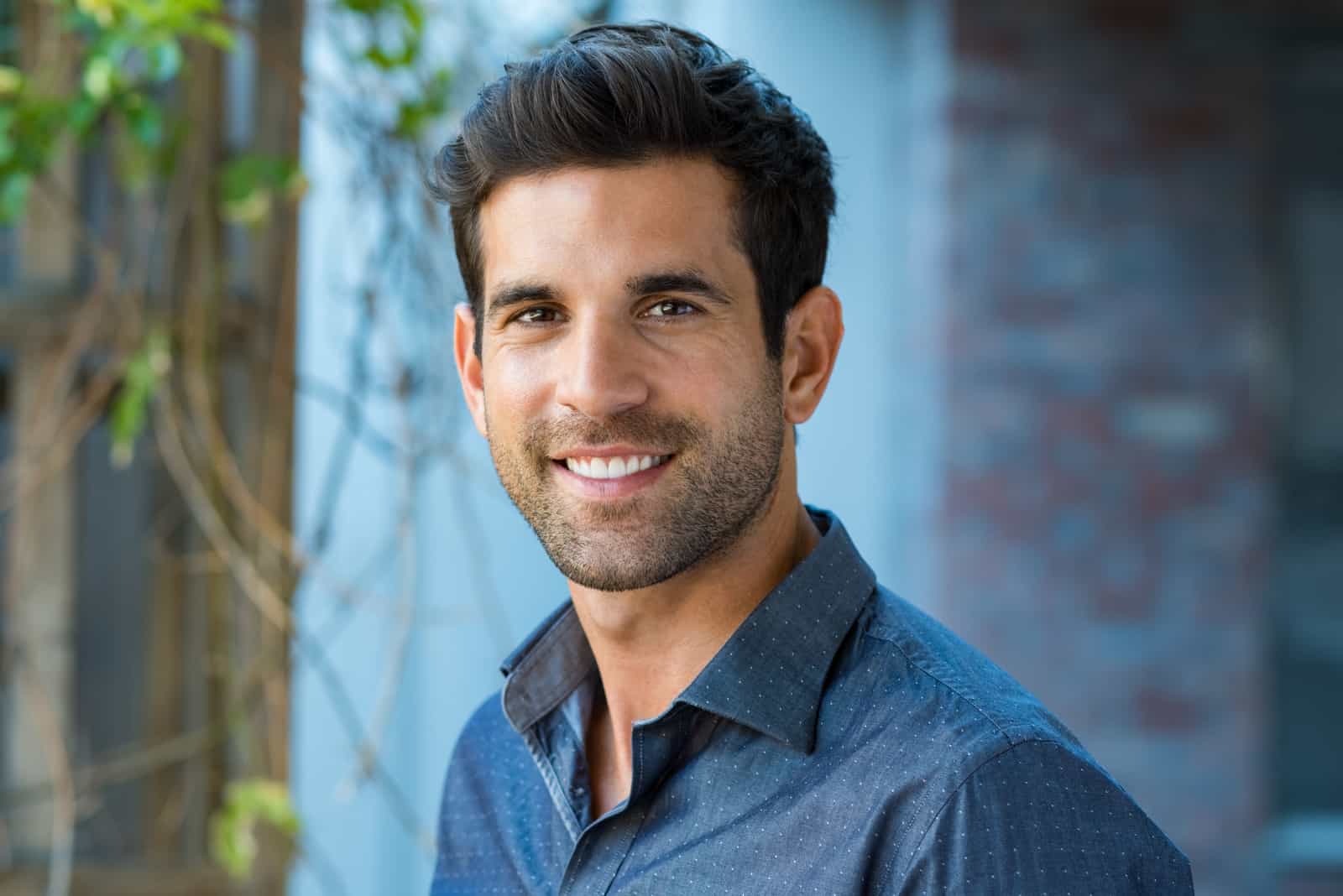 Well, most studies have shown that men become mentally and emotionally mature at the age of 43. It probably happens once they go through a midlife crisis because that period leaves significant changes on a man.

However, my opinion is that we shouldn’t have such a general outlook on it all. Every human being is different in their own way – every man has a different nature and personality.

What I want to say is that it really depends on the man. Due to their natures and some life circumstances, some guys mature in their 20s. Some of them only really mature after that midlife crisis, and there are some guys who will, unfortunately, never grow up.

I hope you didn’t recognize these 7 deadly signs of an immature man in your partner. On the other hand, if you did, my relationship advice is that you should end your relationship ASAP.

It’s not your job to help someone grow up, and you shouldn’t waste your precious time on an immature guy who doesn’t even want to grow up.

You can try to deceive yourself as much as you want, but sooner or later, you’ll understand that you can’t have a healthy adult relationship with an immature person. Leave him, and save yourself from heartbreak before it’s too late. 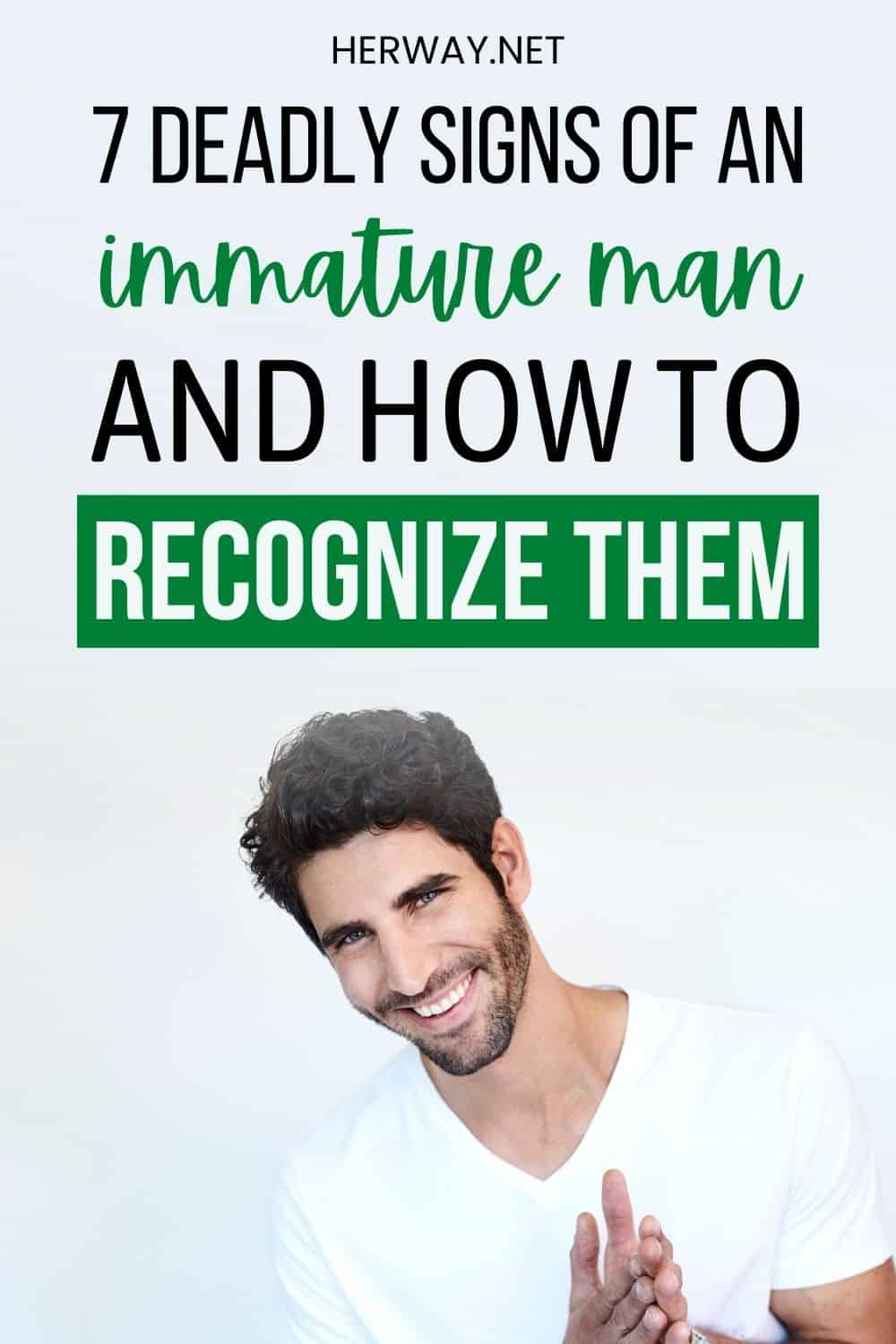 My Husband Misinterprets Everything I Say: How To Fix It

[…] like denying his part in the argument, name-calling, and blaming you for everything can point to emotional immaturity. This might be hard for him to accept and, therefore, hard for you to deal […]