You must be thinking: What does the Empress tarot card mean? I am bringing you a guide through the Empress’s meaning, covering all of her upright interpretations, depictions, and importance as a major arcana card.

The Empress is the mother archetype of the major arcana cards. In addition to being beautifully depicted, she carries numerous signs of prosperity with her.

Since you are searching for the meaning of this card, she’s definitely popped up in your tarot reading.

If your card of the Empress is upright, it is definitely a sign of positive feminine energy and Venus. Therefore, expect positive changes in your love life or family life. 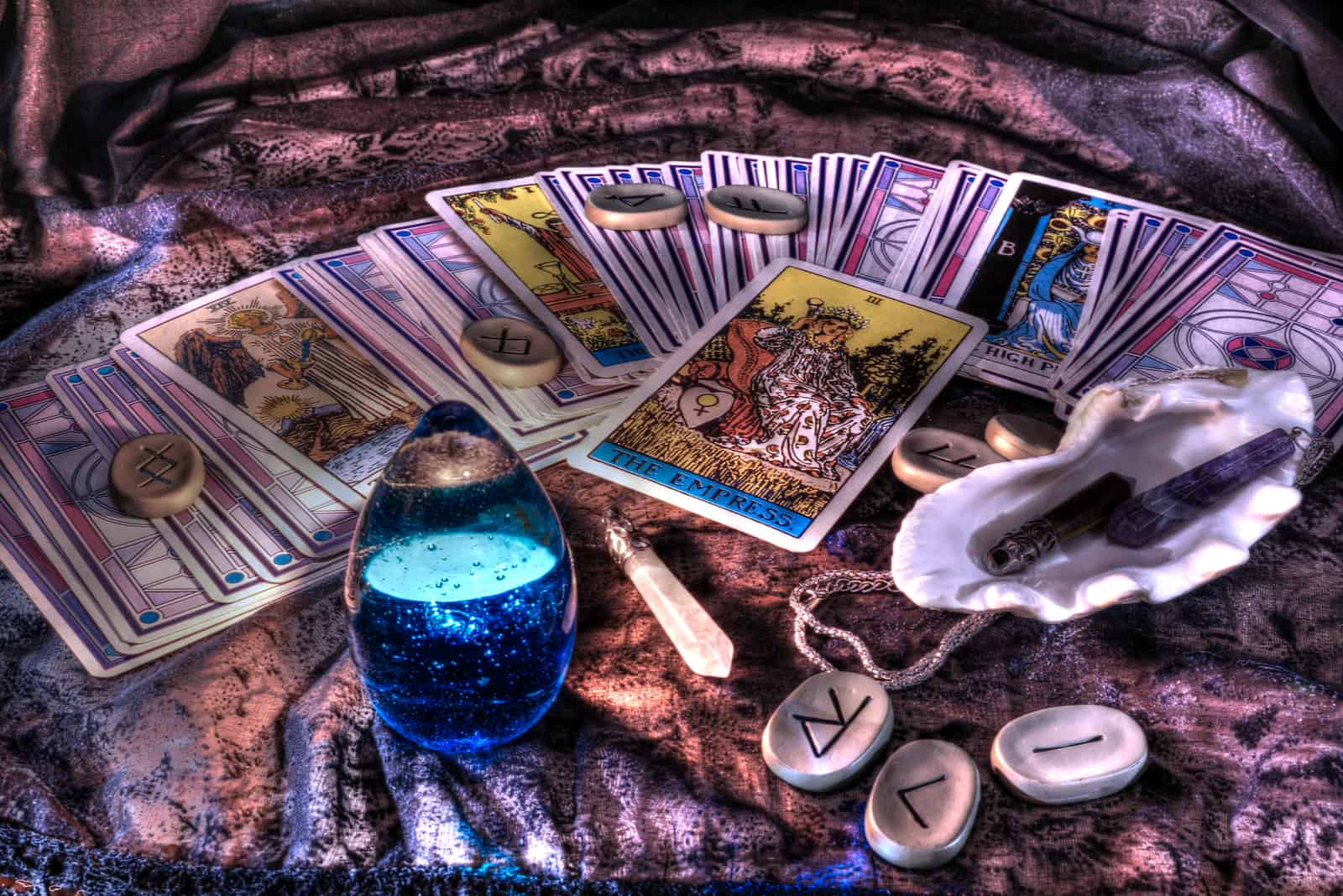 The meaning of the Empress tarot card is fertility, creativity, and nurturing. In the major arcana, the Empress is a mother goddess, and the card is interpreted as an indication that someone has the ability to nurture themselves or others.

The Empress card is the ultimate representation of femininity. She is a mother, a lover, and the giver of life. She also represents Venus, creativity, and abundance.

She is not the High Priestess card and is not tied to the occult or religion. She is purely Venus, the lover and caretaker.

In numerology, I love to point out that the Empress’s number is three. She is omnipresent, just like the Pagan Triple Goddess, representing the three segments of female life: maiden, mother, and crone.

The Empress card will help you establish your true self and find yourself again. You will feel more powerful as you explore your own femininity and all that it entails.

Here are some keywords for the Empress upright meaning of this major arcana card:

This card is also about love and romance, so if you are looking for love, or if you have love in your life, this tarot card can be particularly helpful in guiding you through any difficulties that may arise with relationships.

Depiction Of The Empress 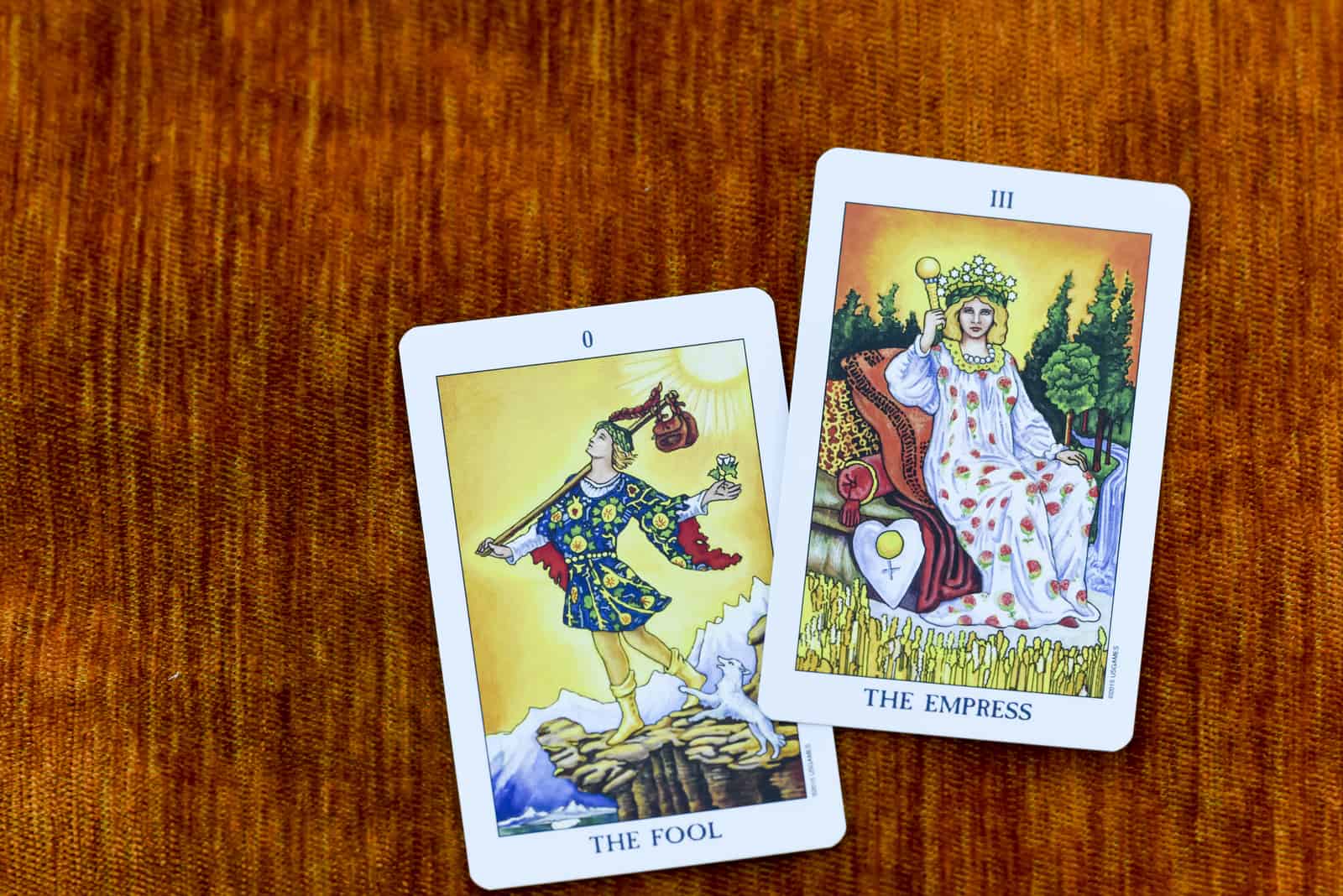 The Empress Tarot Card is a symbol of fertility, creativity, and growth. It also stands for the mother or female principle in nature. The Empress card is the third card in the Major Arcana and symbolizes the Goddess in celebration of her full womanhood.

The Empress is depicted as Mother Earth, often surrounded by a lush forest or pomegranates. This is one of the meanings of the Empress, the beauty of Mother Nature.

Most tarot decks depict her as a pregnant woman. This bears another meaning for her card: her abundance and life-giving force. She is shown as a beautiful woman who represents the divine feminine side and self-care.

When a tarot reader does a love tarot reading, they will notice that this card also has a deeper love meaning.

In other words, the Empress is shown with a scepter, which represents her all-knowing power in love. This isn’t just a good omen for love readings but also for unconditional self-love.

Some Empress tarot spread cards also feature a barley field at her feet. The upright meaning of this card is abundance, represented by the grain.

10 Upright Interpretations Of The Empress Card

Next up are the most common 10 interpretations of the Empress tarot card meaning that could relate to your reading: 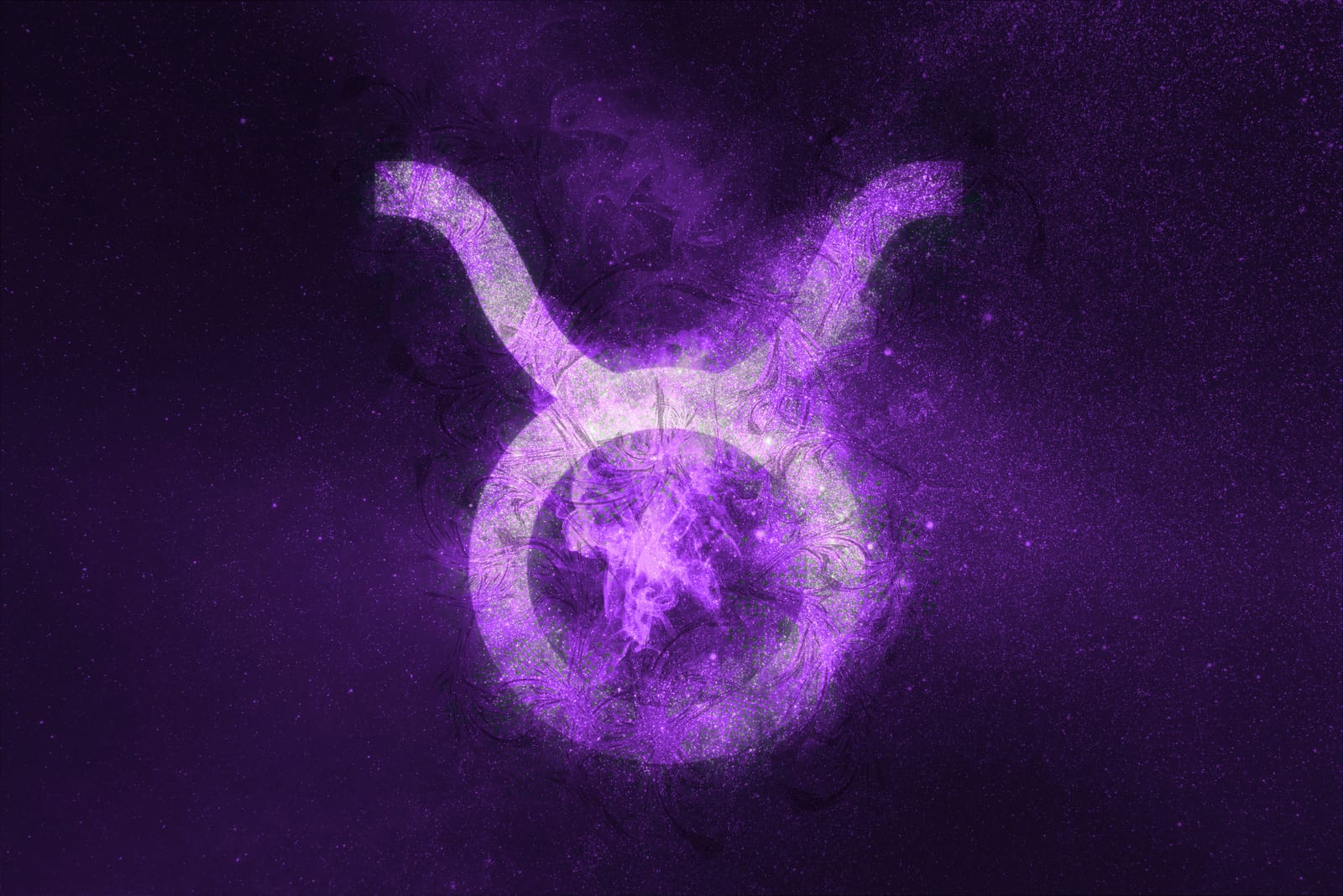 The zodiac sign tied to the Empress tarot card is the earth sign, Taurus. Taurus is tied to the natural world and its abundance. So, it might be that your reading is warning you about a Taurus.

2. Venus in her grace

To the tarot reader, the Empress represents Venus or the divine feminine. The Empress is bringing warmth and natural growth to things.

What are women represented as? Emotionally vulnerable, sensitive, and life-giving. Maybe this is exactly what your tarot reading is telling you.

Maybe you need to be more feminine, trust your feelings, or focus on emotional self-care.

We see the beautiful Empress surrounded by the world in her aura of tranquility. Maybe your tarot deck is telling you that you should try to be like her.

In other words, maybe you should try being more at ease with yourself, address your ego problem, or stop being so sensitive. Tell yourself: “ I want to feel peace,” and it will manifest itself right in front of you.

Pregnancy is a big deal in anyone’s life. The Empress might be there to foreshadow future events. So, if you’re doing a card reading and the Empress starts popping up all the time, it might be time to ask yourself some questions.

Even if you’re doing a love reading or reading the cards for someone else and the Empress is there, it might mean that motherhood is on its way for you.

5. Match to the Emperor 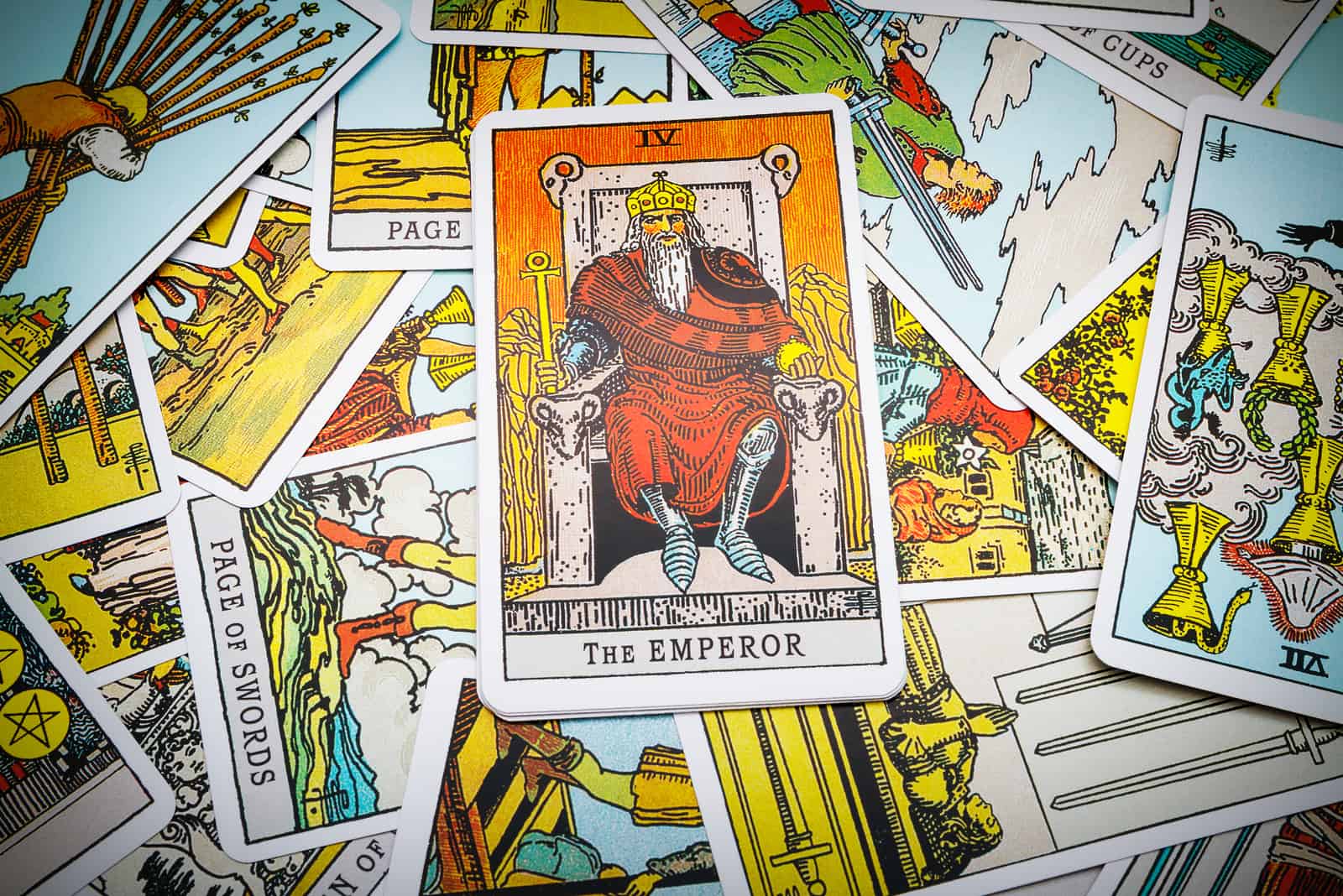 What is one side of the tarot deck without the other? The same goes for the Empress, the Emperor, and the Fool. These three cards represent black, white, and gray in the world.

If these three cards (or just two of them) show up in a tarot reading of yours, it shows that one card is the reversed meaning or polar opposite of the other.

The Empress might foreshadow something in your romantic relationship. She might be telling you that trust issues are ruining your relationship, your relationship needs nurturing, or that you need to do more to save your marriage.

In any case, when it comes to love readings, the Empress has positive energy in love tarot, and generally, the whole tarot spread.

Let’s once again look at the Empress’s aura. She shines with grace and beauty, making every other card look dull.

She is truly unique, and she might be telling you with her scepter that a woman doesn’t need validation. You need to look for elegant ways to rid yourself of negative people and finally reach your true potential through a spiritual awakening.

It’s a hectic world. Only a fraction of us stop and smell the flowers, and every now and then, the Empress pops up in your tarot reading. It might be a sign to stop.

Realizing that you need to give yourself a break and enjoy life is the message she wants to get across to you. In addition, you get to enjoy the beauty of the Empress while saying thank you for her guidance.

9. Happiness is on its way

The Empress tarot card has positive energy to it. It is a major arcana tarot card that just shines with happiness. This might be the message she is sending to you.

There might be good news on the way, or you might be reaching a happy phase of life. So, use manifestation techniques to reach happiness for yourself and meditate with the Empress in mind.

Remember, you should not let anyone steal your joy and the happiness you are feeling. 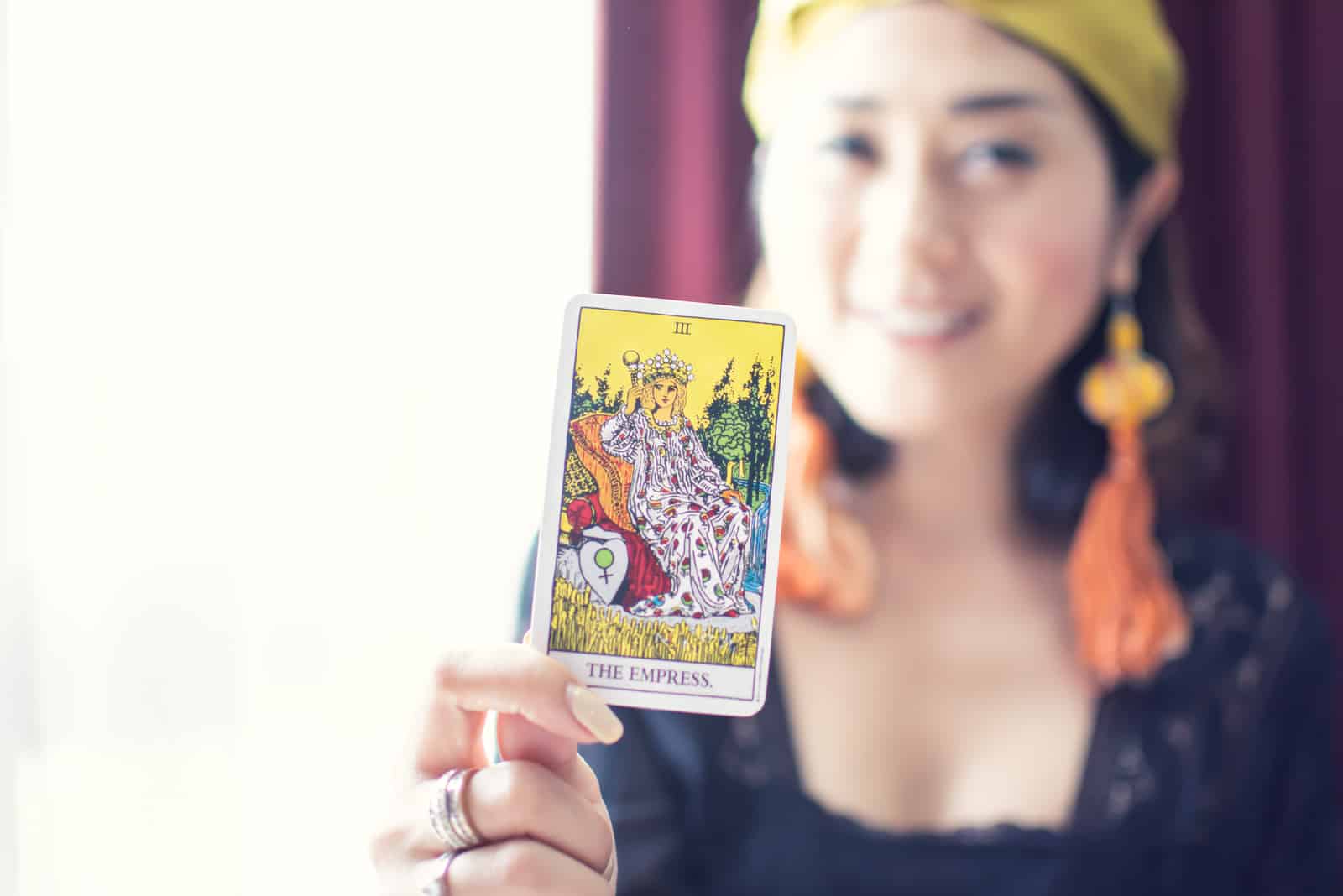 Last but not least is nurturing. The Empress’s meaning of nurturing is one of the most important interpretations of the Empress.

What does this nurturing mean? Once, you were a maiden who nurtured herself. Now, it might be time to become the mother or crone who will nurture others.

Regardless, this card might be telling you it is time to make a life-changing decision or become someone new.

See also: Queen Of Pentacles As Feelings: 13 Ways To Understand Her Message

So, if you’re looking for whether this card is a yes or no in this type of reading, you can be sure that it means yes. The Empress has almost exclusively positive connotations. Of course, the reversed Empress means smothering, a creative block, and withering.

Once you’ve pulled this card in your reading, the Empress’s meaning might not be clear to you right away.

Figure out if there could be any obvious things you might be missing and if you’re asking the right oracle question. I hope my interpretation helped you understand what your cards are telling you.